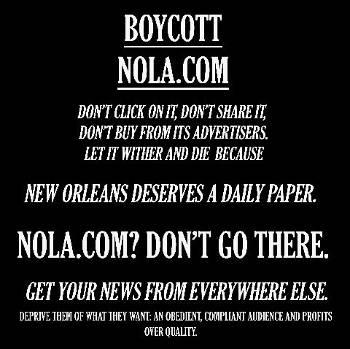 last night i attended an informational forum entitled “public forum on journalism: where do we go from here?” at loyola university’s nunemaker auditorium. it was presented as a conversation with the public about the future of journalism.

while media insiders and new media fans were probably enthralled with what transpired, I don’t think it was the conversation that a lot of the people of new orleans were wanting.

now don’t get me wrong. the panelists were very knowledgeable and sincere about what they brought to the event. the problem was that most of them were out-of-towners talking about an inevitable digital future, information platforms and delivery systems, profitability, and the future of non-profits in the information arena.

with all due respect…what the hell?

what was missed in this event was the fact that new orleans hasn’t accepted, with good reason, one of the fundamentally flawed premises upon which the panel conversation was based: that the acceptance of the demise of a daily newspaper in new orleans is inevitable.

the panel discussion was all about a possible digital media future and what forms it might take. it failed to address the present: the ongoing battle of a citizenry that feels betrayed by an out of town news conglomerate, and the public’s overwhelming readiness to do everything in their power to have either a fully restored times picayune or a newcomer fill the position as the preeminent print news organ in the region.

in this particular context let me explain that i felt that the public….you know, the people that the media was having this conversation with…were severely underrepresented, and i was not alone in this assessment.

i say that because i confess that at about 90 minutes into the event, i felt compelled to address the panel from a roving microphone sent into the crowd for questions and comments, courtesy of the event organizers and included as an agenda item of the forum.

i spoke not as a columnist for an online news, information and opinion website, ie, the good people of www.bayoubuzz.com , but as a representative of “boycott nola.com and the sometimes picayune”, the little facebook page that was begun about six weeks ago and whose current potential audience, so ‘facebook page insights’ informs me, has grown as of this writing to 94,515 unique viewers.

i felt that the panel was speaking ‘to’ the public, but no one was speaking ‘for’ them, and so i raised my hand. i expressed the point of view that new orleans wasn’t willing to accept the advance/newhouse version of a sometimes picayune or its vapid website as a done deal by any stretch; that the newhouse clan has treated its readers with arrogance in their insulting response to letters, petitions and other appeals of its audience as “noise”; the absolutely ludicrous idea that opelousas and shreveport can afford daily papers, but somehow new orleans can’t; and that south louisiana is waiting with open arms for the baton rouge advocate or any other suitor ready to put the newhouse media holdings in louisiana into the poorhouse. i also hoped that this would be part of the ongoing conversation in the future.

earlier i said that i felt i was not alone in this assessment. that is because after my comments, applause emanated from quite a few of the attendees, followed by questions directed at me from the audience about how to find out more about the boycott movement, which i gladly answered. at that point the moderator, as was his absolute right, reasserted his direction and conduct of the event.

in such circumstances, one always wishes afterwards that they might have said something that somehow didn’t come out of their mouths: that “oh, if only i had said that” moment. well, mine was this: in the conversation of the panelists, they had mentioned that so-called “media consolidations heading towards a digital future” were happening in places across america. what they failed to say…and so did i when given the chance…was that every single one of the examples they mentioned were all owned by the same company that owns the sometimes picayune and its vapid website. this wasn’t some great movement sweeping across the world; it was the doing of a small handful of greedy people trying to expand their profits for less effort and overhead, period.

if only i had said that…ah, well. at least i get to say it here.

later, a couple more citizens addressed the panel along the same lines as yours truly, including one woman who emotionally declared that the people of new orleans knew that the paper was profitable and had one of the highest audience saturation rates in the nation, and that there was no good reason for what was happening. she also received applause, and as the applause died down, she slowly left the room. i followed her into the hallway outside, perhaps because she was a kindred spirit, or because she was well informed and presented her comments sincerely and thoughtfully, but i didn’t approach any closer when i saw why she stepped outside, away from the crowd, away from the panel: she was crying. i gave her her privacy.

that’s why this city still needs to have that conversation, the one about how to deal with the present; how to deal with greedy people who already profit off us but clearly are indifferent to us as a community. when that event is held, it’ll be standing room only.

as i’ve said more than once in my columns and writings, don’t take my word for anything. whenever possible, find out things for yourselves. in this case, i understand that the wonderful people at the quality investigative news website site the lens had broadcast the event live online at their website www.thelensnola.org .i also understand that there’s a good chance that the recording will be available on their website for people to view and if i am correct, please visit their site, not only to see the video, but also to see another of the quality news alternatives this city has to offer its citizens.

the forum was presented by new orleans center on open governance, greater new orleans inc, foundation louisiana and loyola university. all that’s left is for you to get involved in the ongoing conversation about what kind of future you want for our city.