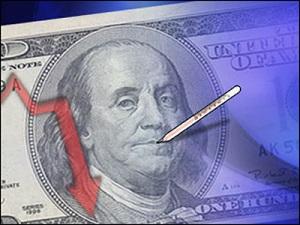 A new jobs report was released today and it shows a very weak economy. Only 162,000 new jobs were added last month, less than predictions and much less than the average monthly gain of 202,000 jobs from the first half of 2013.

This means the Federal Reserve will continue their quantitative easing program, in which they pour $85 billion a month into bond purchases in an effort to sustain growth. Simply, the economy is not strong enough to survive without the infusion of cash from the Federal Reserve.

In this toxic environment, a new healthcare plan will be implemented which will lead to higher health insurance premiums. Basic expenses like gasoline prices have increased steadily in recent months, while wages have not kept pace. Last month, average hourly wages fell .1% to $23.98, while the average work week dropped to 34.4 hours, nowhere near the former standard of a 40 hour work week. These numbers explain why 47 million Americans receive food stamps to cover the costs of feeding their families.

The media likes to parrot the administration’s claim of an economic recovery. They cite an improving stock market and a declining unemployment rate, but beneath the numbers, the real picture is another matter altogether. Most Americans are not able to enjoy the benefits of an improving stock market. This certainly helps the very rich, who have done well during the Obama years. According to a new University of California study, the wealthiest Americans in the top 1% enjoyed a growth of 11.2% in the first three years of President Obama’s term. In contrast, the bottom 99% of Americans suffered an income decline of .4%.

With incomes declining in real terms, millions of Americans are in no position to invest in the stock market or anything else; they are just trying to survive in this Obama economy.

Overall, the economy is still in big trouble, Americans are hurting and nothing is on the horizon to help the situation. Instead, Americans can expect more economic misery when the health care law takes effect and medical costs start to rise.

In the guise of helping Americans, our government is just making everything much, much worse.