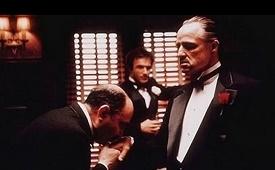 Can you name that tune that everyone is humming these days?

It’s taken more than a decade, but finally, the Blood Family is having its revenge.

Yes! The Blood Family. Do you remember them?

The Blood Family is the aristocratic Spencer clan that produced the inimitable late Princess Diana. Diana’s brother Charles, who became Earl Spencer after their father died, flew back from his self-imposed exile in South Africa where his then-wife was a cocaine addict, and caused a tsunami of gasping both inside and outside Westminster Abbey during Diana’s funeral by pledging to Diana, presumably then a lingering phantasm hovering about and listening to her brother in spiritu, that the Spencers, Prince William and Prince Harry’s "Blood Family," would always be in the lives of the princes to ensure "that their souls are not simply immersed by duty and tradition but can sing openly as you planned.."

Of course, being American, I always thought that the Blood Family was the kith and kin of Don Vito Andolini Corleone, originally from Sicily, then of Manhattan’s Lower East Side, and then of Long Beach, Long Island. "Blood Family" makes me think of olive oil wars and the dead horse’s head in the movie producer’s bed. Until Diana married Prince Charles, the only royal wedding I’d seen was Connie Corleone’s tarantella-laden nuptials to the sleazy Carlo Rizzi where Frank Sinatra, uhm, no, wait, I mean, Johnny Fontane, begged Don Corleone to help him get a movie part and the Godfather sent out his Irish lawyer and when the movie producer said, "No way is that slug Frank Sinatra, oh, uhm, wait, I mean, Johnny Fontane getting that movie part," but then the movie producer stupidly showed off his million-dollar racing stud horse to the Don’s Irish lawyer and then woke up in his satin sheets the next morning with the treasured horse’s head’s gigundo popping-out dead eyeballs staring him down, right before he telephoned the Irish lawyer in Long Beach and told him that he thought Frank Sinatra would be great for that film.

The Spencer Blood Family is so much more subtle than the Corleones, but just as effective, and not one horse’s head was harmed in the making of their movie. Uhm, no, wait, I mean, in the making of this history-- the history of the British monarchy that will surely end up with being a movie on the Hallmark Channel, at least. Just as Earl Spencer promised, Prince William’s soul is unencumbered by either duty or tradition, and has been singing openly a little tune that now sounds a lot like, "Trah lah-lah-lah-lah, I’ve gotta be me!"

The proof of the Spencer Blood Family’s triumph to not be forgotten with the death of its most famous and photogenic member is in the name.

Yes, in the name of the new little baby recently presented as being the newest of the British Royal Family’s members–George Alexander Louis.

Yup! And despite what you’ve read and heard, "George" doesn’t stand for the Beatle who played lead guitar, and it doesn’t even stand for the late King George VI and all the other Royal Family Georges all the way back. "Alexander" doesn’t stand for Alexander the Great, either. And "Louis" is not for the greatest trumpet player the world has ever known, nor even directly for Prince Charles’s late "honorary grandfather, Lord Louis Mountbatten.

No! Trah-lah-lah! Can’t you name that tune?

Is nobody at the London Daily Mail putting these things together?

And who are the namesake Spencers?

George, like his cousin Prince William, is a ginger-haired young gentleman, attentive to his mother and less boisterous than his sister Celia whose FaceBook page a while back showed her chugging copious amounts of booze and sticking various items like G.I. Joe action figures between her breasts.
Alexander Fellowes’ alias is "Beetle," as in the scavenging bug. While at Oxford, Alexander became infamous for a particularly savage food fight that quite ruined a beautiful old dining hall and caused several students to be jailed. A 2005 London Mail Online article "unmasked" Alexander as the "mastermind behind the debauched evening."
Louis, the youngest of the Blood Family’s namesakes, was raised in South Africa and shuttled between his father’s opulent English estate, Althorp (which Louis as present viscount will one day inherit) and his mother’s gated South African home. Louis’s parents had a turbulent marriage followed by more turbulent marriages and failed romances, and his mother has struggled with serious drug addictions. His sisters raised British hackles and who knows what else a while back when their FaceBook pages showed them slinking around in lacy minidresses while simulating sex with men and women, some of whom were lying prone, with buttocks raised high, underneath the young blond gyrating aristocrats’ widespread legs.

Wow! Those are things that the other Blood Family, the Corleones, would never have tolerated!  At least, not from wives and daughters.

Honestly–before Charles and Camilla had their stolen interludes, just about the raciest thing that ever happened to Queen Elizabeth were those persistent rumors that her husband Prince Philip had commandeered a naval vessel to toot-toot past Hollywood starlet Merle Oberon’s beach house.  So very quaint.

Is nobody at the London Daily Mail putting these things together?

George Alexander Louis.  What’s in a name? Here, the Spencer Blood Family is all over the name.  Although the matter is far from fully settled, if all goes to plan, and if the baby survives Carole Middleton’s determined but mysterious machinations at Bucklebury Palace, little Prince George Alexander Louis will be third in line to the British throne, and may one day become king. It will be a name to remember. Sadly, just as anything Kate Middleton wears becomes instantly sought after, undoubtedly we will see many more little boys inexplicably named "George" in the years to come.

The Spencer Blood Family has triumphed!