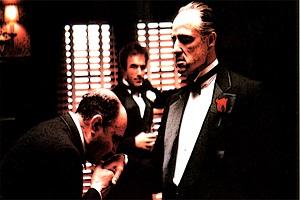 He’s a nice guy, quite amicable, smart, and appears to be a great family person.  I hope he does very well in life.

Yet, if the report from John Maginnis and Jeremy Alford were not true, I probably would not have any issues with his taking over the helm of Louisiana Association of Business and Industry as Dan Juneau’s replacement.

But, if it is true that Waguespack, a former top lieutenant of Godfather Jindal is being "recommended" by the LABI selection committee after intense lobbying effort by the Jindal clan, then I say, what is the offer that can't be refused?

While I have not always agreed with Juneau or LABI, I have immense respect for that organization and for Dan Juneau as its President and CEO.  I believe Bayoubuzz was the first online publication to run his weekly columns and I have always looked forward to reading them.

Juneau is very conservative.  I have always felt he was honest and above the influence of politics.  It has always been obvious that his interest has been his organization and his constituency, Louisiana businesses.

So, it would make sense that a very ambitious power-grabbing Team Jindal would want to control the one organization and the one position that has often been one of the administration’s strongest ally and sometimes one of the most fierce opponent.

It makes sense that the team that now controls the Louisiana Board of Regents, almost all state boards, LSU Board of Supervisors, the Louisiana Republican Party would want to ensure that it can dominate the most influential business group in the state.   After all, this is the team that now claims its leader has a favorable of 50 percent based upon its own internal poll, when all other surveys, liberal and conservative over the past five months post the governor at a 38 percent high and as of this week, a 28 percent.  They can try to fool the national media, but they are not going to fool the people of Louisiana.

It also makes sense that the same group who appears to make a tobacco-laden backroom special deal over the future of the 5th District of our Louisiana Congress, in which that Congressman resigns,  the next day his job with the Jindal Administration is announced, with a Team Jindal candidate in place full of campaign money, pre-arranged Team Jindal support, including the top Team Jindal consulting firm as its political advisor, would want to extend its political claws over the most critical political and business worlds in the state.

It also makes sense that some people, concerned about the future of Louisiana would have great pause and concern about what might be raw  effort to dominate that golden horn of enterprise.

So, if the same group who want to con the state and the nation to think that white is black, now wants to control critical independent business and lobbying organizations for their own sake of power, then here are my own questions before I am willing to join in toasting Waguespack as the next “King of LABI”.

Who are the members of the selection committee?

Do any of them or family members have contracts or play a role in state government?

Whom from the administration or the Louisiana Republican Party contacted them about selecting Waguespack and what, if anything was communicated?

LABI has a right, of course, as a member-based organization to choose any person it wants to represent them.

Waguespack has a right to want to become President of that or any other organization.  If no influence is being born by the most powerful force in the state, then, he might be as good of a choice as any.

LABI would not be the first, nor the last organization to employ a former high-ranking official of an administration.  Former Commissioner of Administration, Mark Drennan left the Foster administration and headed the New Orleans Chamber.  Stephen Perry, former Chief of Staff for Foster now heads the most influential New Orleans tourism and convention organization.  There surely are other former top officials that are later employed in the organizational and lobbying sectors.

But none of those groups have enjoyed the statewide sway over the business and political communities as does the Louisiana Association of Business and Industry and its organization head.

Speaking for myself, and perhaps others, perception is reality.  So, before I place stock in the credibility and independence of that organization, given the endless squeeze for power that this administration has demonstrated to date,  I would just like some basic questions answered.

For further background on this issue, here is a recent blog by C.B. Forgotston and the original article by the terrific Maginnis-Alford team.

Kudos to John Maginnis and Jeremy Alford for breaking the story below.   The selection of Stephen Waguespack to be the president of LABI has long been rumored.

Bobby Jindal could NEVER beat LABI, so he found a way to take it over.

As a supporter of LABI since it was established in 1975, a 32-year member and a former lobbyist for LABI, it breaks my heart to see Jindal take control of LABI.

I’ll get over my broken heart, but the Louisiana business community and individuals will suffer from losing such a strong voice at the Louisiana Legislature.

With all due respect to all the other business organizations in this state, LABI is sui generis.  I’m very proud to have been a very small part of LABI’s successes and failures.

I don’t know Stephen Waguespack.  I have tried to contact him numerous time, but he refuses all my communication.   However, I do know that the ONLY people he will answer to are Bobby Jindal and Timmy Teepell, not the LABI Board and certainly not the individual members.

I will catch hell from lots of people, some will even be friends, for expressing my view on this matter.  Have at me!

Stephen Waguespack, former chief of staff to Gov. Bobby Jindal, is in line to be the next president of the Louisiana Association of Business and Industry, one of the state’s most powerful lobbying groups. He is the selection committee’s recommendation to the LABI board of directors, which meets Sept. 6 to choose a successor to Dan Juneau, who is retiring.

Jindal allies are said to have pressed hard for Waguespack’s selection. That has caused grumbling among some LABI members who fear it moves the organization, known for its independence, closer to Jindal’s orbit. Members doubt those reservations are enough for the board to reject Waguespack, but there is the possibility the process could be restarted.

What’s settled, though, is that former House Speaker Jim Tucker is out of the running. The board also interviewed Dave Kemmerly, the director of the Kentucky Medical Society and one-time aide to former Gov. Buddy Roemer.

Waguespack did not return a phone call for comment. He also failed to inform his employer, Jones Walker, of which he is of counsel, that he interviewed for the position, according to sources.

In the last session, LABI was considered more influential with legislators than was Jindal. The group finished off the governorâ’s tax swap proposal before the session began, when it opposed the plan that would have shifted the tax burden to business.

More in this category: « Breaking" Coast Guard Rig Explodes In Gulf of Mexico Near, West BP Site Katrina Louisiana, New Orleans: Recalling A Week Of Horror »
back to top