Pro race war Kimathi, should be investigated by DHS, not employed 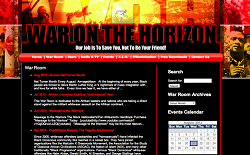 It is really amazing what our federal government will tolerate from their employees. At the IRS, Lois Lerner is currently enjoying a paid leave of absence from her position as Director of Exempt Organizations. Of course, Lerner is under fire for her mishandling of Tea Party organizations and her notorious decision to take the 5th amendment instead of testifying truthfully before Congress.

At the State Department, Secretary John Kerry just reinstated four employees who were placed on administrative leave in the aftermath of the terror attack in Benghazi. So, no one has been held responsible for the lack of security and response in Benghazi that led to the death of four Americans.

It seems that it is almost impossible to be fired by the federal government. An employee can be utterly incompetent, politically biased and even an avowed racist and still collect a paycheck. This week it was revealed that a Department of Homeland Security (DHS) employee Ayo Kimathi, who works as a small business specialist, operates a website dedicated to the mass killing of white people.

On the site, known as “War on the Horizon,” Kimathi uses the online name of “the Irritated Genie.” He states that “once we have largely purged our Race of its Race traitors, war with our natural enemy, the white Race, will intensify and become the single most powerful motivating force in the lives of Afrikan people worldwide.”

He also warns of an “unavoidable, inevitable clash with the white race.” To survive, he believes that Blacks will “have to kill a lot of whites.”

His former supervisor said Kimathi was “filled with hate.” She is “astonished” that he is still on the government’s payroll. Millions of Americans undoubtedly agree with the amazed supervisor.

It is also outrageous that Kimathi’s unit buys items like handcuffs, ammunition and guns. It seems obvious that anyone advocating mass killing should not been given federal funds for items that can be used to imprison, harm on murder innocent people.

Amazingly, Kimathi’s site, that advocates a race war and the mass extermination of white people, was approved by Kimathi’s superiors at the Department of Homeland Security. This is clearly an example of a racial double standard for a DHS employee who works on the side as a KKK member operating a racist website would not be allowed to continue to work for the department.

What is especially ironic is that the DHS is supposedly in place to protect Americans against domestic terror threats. Yet, in its own midst, Kimathi is preaching racial warfare and the killing of White Americans.

Obviously, DHS is either not serious about their mission, utterly incompetent or so politically correct that they cannot take action against a racist African American employee.

According to a press secretary for the U.S. Immigration and Customs Enforcement, the agency does not “condone any type of hateful rhetoric or advocacy of violence of any kind against anyone.” Since Kimathi is still on the department’s payroll and no action has been taken against him, it is clear that the press secretary’s comments are as meaningless as a President Obama campaign promise.

Kimathi should not be employed by the Department of Homeland Security; he needs to be investigated by the department as a domestic terror threat.