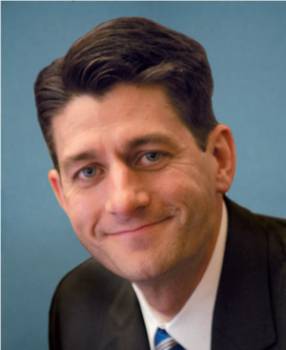 It is official.
Mitt Romney has picked Paul Ryan, the Congressman from Wisconsin, the architect of the Ryan Plan.
According to news reports, Mitt Romney’s picks is somewhat controversial in terms of the timing. He decided upon Ryan during the middle of the Summer Olympics, weeks away from the Republican convention.
This is what news reports are stating about Ryan and after reading this, take our poll.

But, how is he as Romney's VP pick?   And after reading this, take our poll.

Don't forget to pass the poll to others.

In Mr. Ryan, 42 years old, the Romney campaign gets a conservative who has spent recent years at the center of national debates about the size and scope of the federal government. With his proposals to revamp entitlement programs for future retirees and the poor, he has become a hero to conservatives and a target for liberals.
http://online.wsj.com/article/SB10000872396390443404004577582112521141598.html
Ohio Sen. Rob Portman calls Rep. Paul Ryan "a great choice" for the Republican running mate spot Portman was believed to be a top contender for.
Portman says the Wisconsin congressman is among his best friends and a leading voice on pressing issues. Romney was introducing Ryan as his vice presidential choice Saturday.
Portman says in a statement that as Romney campaign chairman in Ohio, he will work hard to make sure the ticket carries the pivotal state.
http://www.crescent-news.com/ap%20state/2012/08/11/portman-praises-ryan-choice
Wisconsin Rep. Paul Ryan, the newly appointed running mate for presumptive Republican nominee Mitt Romney, on Saturday stressed that his background in Congress will work to Romney's benefit.
“I believe my record of getting things done in Congress will be a very helpful complement to Governor Romney’s executive and private sector success outside Washington. I have worked closely with Republicans as well as Democrats to advance an agenda of economic growth, fiscal discipline, and job creation,” Ryan will tell the audience of more than 1,000 who came to see the announcement of his selection, according to advanced remarks released by the campaign.
http://www.nationaljournal.com/2012-presidential-campaign/ryan-says-his-background-will-help-romney-20120811
U.S. Rep. Paul Ryan of Wisconsin is considered a rising GOP star and the Republican Party's leader on fiscal and budgetary issues.

The chairman of the House Budget Committee was first elected to Congress at age 28, and later helped launch the party's "Young Guns" program to recruit candidates in districts where Republicans lost.

Now 42, Ryan is the architect of the House GOP's budget proposal, which Democrats compared to an attack on the poor, but Republicans say is intended to save Medicare and rein in spending.
http://ozarksfirst.com/fulltext?nxd_id=686842

{jvotesystem poll=|23|}
U.S. SEN. CHUCK GRASSLEY: “I think one word, ‘great.’ Great from an intellectual standpoint and great from a clarity of policy standpoint. And a person ultimately, without a doubt, qualified to be president.”
CHUCK OFFENBURGER, Greene County: “He’s certainly a better pick than Sarah Palin was four years ago. Ryan has credentials and experience that qualify him to be vice president. Of course, I like that he’s Catholic, a bicyclist, a Midwesterner and sort of next generation in politics, but he’s way too conservative for me. The Republican ticket of Romney and Ryan will be a strong and appealing team for many in business. But they’re going to have big trouble with people of modest means and many of us who are senior citizens. And when has there been a ticket in either party with less experience in international relations? Condoleezza Rice would have been a better choice.”
http://blogs.desmoinesregister.com/dmr/index.php/2012/08/11/paul-ryan-choice-iowa-republicans-react/

Democrats and the Obama campaign are poised to vigorously portray Mitt Romney’s selection of Rep. Paul Ryan for vice presidential nominee as a toxic choice and politically extreme.
“He has capitulated to the extreme in his party,” a Democrat with ties to the Obama campaign said privately, hinting at the message to play out in the days ahead. “[Ryan] is not a reformer, but an ideologue who will do anything to preserve tax cuts for the wealthiest.”
Over the past few months, Democratic researchers at both the campaign and independent groups have been amassing opposition files on potential VP candidates, including Ryan, for a rapid and robust response.
One of those groups, the liberal PAC American Bridge, today launched a new web site — MeetPaulRyan.com – featuring hundreds of pages of critical background on Ryan and hours of tracking footage.
Obama campaign officials would not formally comment on the Ryan pick ahead of Romney’s announcement. But the Democratic National Committee signaled it would bracket the moment with a planned shadow bus tour through Virginia and North Carolina.
http://abcnews.go.com/blogs/politics/2012/08/democrats-to-cast-paul-ryan-pick-as-extreme/
Wisconsin Rep. Paul Ryan, who Republicn sources tell ABC News has been selected as Mitt Romney's running mate, is young and politically tested.
Just 42 years old, he's already been elected to represent Wisconsin's 1st District seven times. Within the Republican Party, he's regarded as a rising star, and conservatives would be delighted if he was added to the ticket. It's no secret that the more hardcore factions of the GOP have had their doubts about Romney (see: Rick Santorum's longevity in the primaries). Having Ryan riding alongside the candidate would ease the bulk of their concerns.
On the flip side, Paul Ryan is young, politically tested, and arguably more popular inside the Republican Party than Romney. Here's a challenge: Name another vice presidential nominee with similar credentials whose ticket won the general election? Exactly.
http://abcnews.go.com/blogs/politics/2012/08/paul-ryan-choice-could-ignite-ideological-war/

Senator David Vitter and the Louisiana Republican Party is reacting positively to the news of Rep. Paul Ryan as Romney's Vice Presidential running mate. "I think the world of Paul Ryan. We came to Congress ...

NBC News ON A CAMPAIGN BUS IN VIRGINIA -- When Mitt Romney introduced Wisconsin congressman Paul Ryan as his running mate today, it was the culmination of a still-mysterious process ...

5 things Mitt doesn't want you to know about Paul Ryan

Both sides find plenty to like in Paul Ryan pick

Nod to Ryan may push Jindal to challenge Landrieu

If Gov. ... If Gov. Bobby Jindal does envision a career ahead of him in extremely high national office, potentially the Republican vice presidential candidate pick of former Gov. Mitt Romney of Rep. Paul ...

For Email Newsletters you can trust
OR