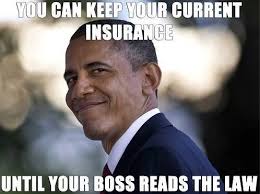 If you are President Obama, you know you are not having a good week when some of your most crucial and trusted allies let you know through the media that your “legacy” legislative achievement is really getting under their skin.

So it was this week when the top leaders of three large labor unions sent a letter to the president and the press demanding changes in the Affordable Care Act, aka ObamaCare. The letter was quite blunt; pointing out that elements of the legislation would “shatter not only our hard-earned health care benefits, but destroy the 40-hour work week that is the backbone of the American middle-class.” Strong words indeed!

The unions have just cause to be concerned. Many of them bargained hard for better health care benefits and greater shares of premiums being paid by employers. Those gains were often realized by taking lower pay increases in the collective bargaining agreements they signed. Now those labor leaders are in many cases having to tell their rank and file that benefits are going to be lower and their premiums are going up. That message is not being received well.

The tradeoff between lower wage increases and better health benefits that is now coming back to haunt unions isn’t the only poison pill in ObamaCare that is becoming apparent. Many employers--including many with lower-paying jobs manned by service employee union members--are determining that the only way they can comply with ObamaCare and still survive is to reduce the weekly hours worked by their employees to escape coverage requirements. For many workers, there will no longer be a 40-hour workweek. In fact, millions will not even have a 30-hour workweek.

It is hard to muster a lot of sympathy for the unions. They blindly followed the president’s lead on the legislation as it was blasted through Congress on straight party line votes. They asked few questions about what was in the legislation and were kept in the dark along with everyone else about final language as the votes were cast. Unions are usually fairly savvy operators in the political sphere. In this instance, they placed blind faith in a president and congressional leadership who were more in tune with getting a win than protecting their allies. The letter from the unions to the Democratic leadership in Congress clearly shows they have awakened to that reality and aren’t happy about it:

“When you and the president sought our support for the Affordable Care Act, you pledged that if we like the health plans we have now, we could keep them. Sadly, that promise is under threat. We have been strong supporters of you. In campaign after campaign, we have put boots on the ground, gone door-to-door to get out the vote, run phone banks and raised money to secure this vision. Now this vision has come back to haunt us.”

The continuing unpopularity of ObamaCare has the Democrats in Congress worried about the political fallout when the 2014 elections roll around a year from now. Those same powerful Democratic leaders who jammed this legislation down the throats of the then-Republican minority are now decrying the fact that the Republicans won’t join them in “fixing” the law. They are setting the stage for the weak argument that the impending chaos of the law’s full implementation is all the GOP’s fault since they refuse to engage in a major overhaul of the incomprehensible nightmare of unintended consequences and federal government power grabs that is ObamaCare.

That will be a hard sell to make--even to their die-hard union supporters--but I am sure Pelosi, Reid and Company will try to do it once again with a straight face. Lots of luck on that one.

by Dan Juneau, publisher of Bayoubuzz.com