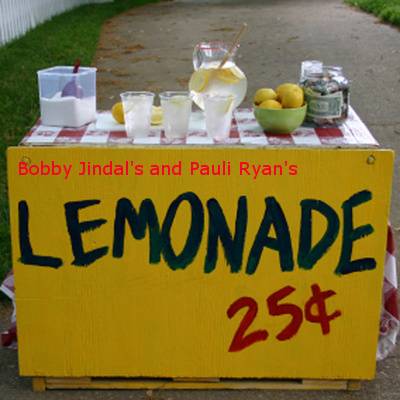 Bobby Jindal got squeezed out Saturday morning.
Right now, the road to the White House appears closed to Louisiana Governor Bobby Jindal except as a visitor to the big house or as a member of the Romney-Ryan administration, should there be one, come November.

Jindal, has arguably and some say obviously campaigned for the Vice President position for years.  Others claim his real sights are on the top spot of the ticket, not number two.

Yet, the high-flying Jindal has some options and opportunities to land upon Pennsylvania Avenue as a resident but it is probably not going to be a direct jump from the 4th floor of the Louisiana state capitol.

Jindal is only 41 years old and certainly could build some more “bonafides”  so when the real shot comes, he can point to his job experience.

He cannot run for re-election as Louisiana Governor due to term limits and his second term ends in January 2016.

Assuming that Romney loses this year, Jindal could become a contender for President or even a VP possibility the next election cycle after Obama’s days at the helm has ebbed.

Then, there are other options if he really has the itch to get back into Washington DC, the place he seemed to have an itch to get away from when he was a congressman.

He could run for U.S. Senate.

Jindal could try to take on Landrieu since pollsters and pundits claim she is weakened due to the changes in political sands in Louisiana plus her controversial position on the Affordable Care Act or otherwise named Obamacare.

Should he lose, he certainly can run for Vitter’s seat, assuming that becomes vacant.

And, of course, Jindal might have another forty years or so of political life.  Who knows, stranger things have happened.  Politicians have switched political parties in midlife for various reasons and if all else fails, a Democrat Bobby Jindal is a very remote possibility should there be a job available.

Perhaps his best course of action to capture the highest spots in the land could be to do some time in the private sector.   While campaigning for Romney, Jindal openly complained that President Obama has never run a business and has never even run a lemonade stand.

While that statement appears to be correct, the Governor might have some sucking up to do since the man who now holds the job he obviously wanted never ran a lemonade stand either.  Actually, Paul Ryan has spent virtually all of his adult life employed smack in the public sector and not having to hang out a shingle.

Oops, come to think of it, it appears Bobby Jindal has never run a business or lemonade stand either.  He just might consider adding that to his already impressive governmental resume.

Anyway you cut it, the road to success is sweet for Bobby Jindal even if he never stays a night at Pennsylvania Avenue.

He now has a chance to do exactly what he was hired to do—be a fulltime Governor of the great State of Louisiana and then take his road show elsewhere.

Unfortunately, with elections pending until early November, with the national spotlight still shining bright, with the speaking and book tours still an enticing calling, urging Bobby Jindal to focus upon Louisiana healthcare, education and jobs is a way too much for anyone to ask.  Unlike his mentor, Governor Mike Foster who hated to travel, Bobby Jindal is frequent flyer, and  even more so, a frequent campaigner. And now with a sour taste in his mouth now being a VP also-ran, you can bet he will find another road to somewhere else, fast.

Senator David Vitter and the Louisiana Republican Party is reacting positively to the news of Rep. Paul Ryan as Romney's Vice Presidential running mate. "I think the world of Paul Ryan. We came to Congress ...

NBC News ON A CAMPAIGN BUS IN VIRGINIA -- When Mitt Romney introduced Wisconsin congressman Paul Ryan as his running mate today, it was the culmination of a still-mysterious process ...

5 things Mitt doesn't want you to know about Paul Ryan

Both sides find plenty to like in Paul Ryan pick

Nod to Ryan may push Jindal to challenge Landrieu

If Gov. ... If Gov. Bobby Jindal does envision a career ahead of him in extremely high national office, potentially the Republican vice presidential candidate pick of former Gov. Mitt Romney of Rep. Paul ...