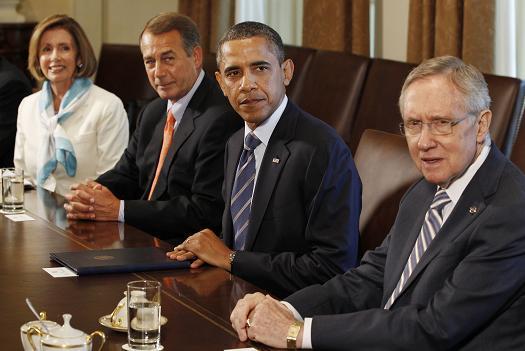 Polls consistently show that the vast majority of Americans oppose military intervention in Syria. In congressional offices, calls have been running 100 to 1 against involvement in Syria. Nevertheless, leaders of both political parties are supporting the President’s plan to launch a limited military strike in Syria.

It is politically understandable that leaders of the Democratic Party would stand behind a Democrat President. However, it is inconceivable why Republican leaders like House Speaker John Boehner (R-OH) and Majority Leader Eric Cantor (R-VA) would also give President Obama political cover.

The Republican Party today has lost their way. The party is not united as there is a massive fight between the libertarian and establishment wings. Unfortunately, the leadership of the GOP has firmly aligned with the moderate establishment wing of the party. These Republicans are not in favor of making drastic changes to our federal government. They want to get along with the Democrats, curry favor with the media and retain their positions of power.

On issue after issue, Boehner and the Republican leadership clique is on the wrong side. Libertarians and conservatives are opposed to our country getting involved in another war. Syria is in the midst of a civil war that should be of no concern to the American people. There is no national security interest in Syria. While chemical weapons are abhorrent, there is conflicting evidence as to who launched the attacks. The group we are supporting, the rebels, are composed of many different organizations, including terrorists linked to Al Qaeda. In recent weeks, videos have been released showing the rebels beheading Catholic priests, eating the heart and liver of Syrian soldiers and executing Assad supporters in cold blood. The United States should not be on the side of cannibals, terrorists and anti-Christian extremists.

It is not just the Syrian war in which grassroots Republicans are on one side and the GOP leadership is on the other side. Whether it is taxes, de-funding Obamacare, NSA spying or Syria, the leadership of the Republican Party is doing the bidding of bureaucrats and special interests, not the grassroots.

The GOP leadership is not connected with the people who volunteer, donate and allow the party to win elections. As a result, John Boehner needs to be removed as House Speaker immediately. If not, Libertarians and conservatives need to find another political party to support.

Why should conservatives continue to work so hard for a party that does not represent their interests? All congressional Republicans need to do is listen to their constituents. Even war hawk U.S. Senator John McCain (R-AZ) received an earful from his voters at a recent town hall meeting. This same reaction is happening all over the country.

It is time for the Republican Party to emerge from their Beltway obsession and realize that the party is not representing their constituents who live in the rest of the country.

If the House Republicans do not stand firm in opposition to the war in Syria, it may lead to a major split in the party. This time the wounds may be too deep to heal and the party may suffer irreparable harm. Hopefully, congressional Republicans will listen to the people who sent them to office, the ones who pay their salaries and allow them to live a very privileged life as a member of Congress, the voters.