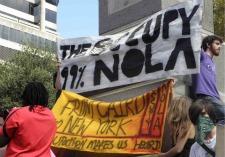 The Occupy NOLA press, on Saturday,  has circulated a media release in which it has denouced Mayor Mitch Landrieu, the New Orleans Police and the Landrieu administration of showing contempt for the judicial process and for engaging in civil rights violations, particularly related to its recent forced evacuation of Occupy NOLA encampment earlier this week.  Here is the press release:

The challenges faced this week by Occupy NOLA are part of an intentional and unconstitutional pattern by the City of New Orleans of violating its citizens' civil rights. Early Tuesday morning, the City acted in contempt of the legal process by barricading and forcing out more approximatley 200 citizens exercising their free speech and assembly rights only hours before a scheduled hearing Tuesday in a New Orleans federal court concerning an Occupy NOLA Motion for a Temporary Restraining Order, filed to prevent the City's planned eviction of the camp in Duncan Plaza. The City was well-aware of the hearing.

The movement's legal team responded to the eviction notices by engaging in respectful, professional, open, and what they thought was honest conversation with the City.  Occupy's legal team had a 1pm Monday meeting with Mayor Mitch Landrieu that was postponed on Monday afternoon and never rescheduled. Chief Serpas called one of the Occupy NOLA attorneys on Monday evening reassuring there would be no enforcement or eviction with the court hearing the next morning. Other commanders and captains assured the same. The city attorney did as well.

Sadly, the City of New Orleans has become a danger zone for civil rights.  On Tuesday morning, the City of New Orleans and more than 150 police officers forced some of its neediest citizens to leave their shelter and their few belongings behind in the darkness of one of this winter's coldest nights, only to have their property, including wheelchairs, tents, equipment, food, laptop computers, cell phones, and sleeping bags, destroyed and thrown out. And because the city preempted the hearing in federal court that granted the Temporary Restraining Order, it was another cold-hearted waste of taxpayer money and government resources.  At a minimum, six hundred (600) hours of police time, time that could have been spent investigating the daily murders that happen on the streets of New Orleans.

This contempt of the legal process shown by the City of New Orleans is not an isolated incident. The US Department of Justice, after an investigation, has found a “culture” and “pattern” of civil rights violations by the New Orleans Police Department. Recently, the City barred African American activists from entering Mayor Mitch Landrieu's public announcement regarding the City's plan to curb the rising number of murders in New Orleans. The District Attorney’s office has routinely shown contempt for the Fourth Amendment, Fifth Amendment, Brady rule, and other laws that guarantee basic protections. Orleans Parish Prison has evolved into the most dangerous municipal jail in the western world.

Unlike some of the City's public announcements, all Occupy NOLA General Assembly meetings have been and are open to the public. Additionally, Duncan Plaza is and has been open for public use during the occupation, contrary to the City's claims. The only time the Plaza was closed to the public was when NOPD enclosed it with barricades violating the due process offered by our justice system.

The Occupy NOLA encampment is part of a nationwide and international movement of political action directed at addressing economic inequality, including foreclosures, homelessness, lobbying, government waste and political corruption. The actions of Occupy NOLA are political speech protected by the First Amendment of the US Constitution, yet the City acted hours before the hearing in federal court, violating the Constitutionally-protected rights of the group.