Syria, hate and weapons of mass disrespect of Obama 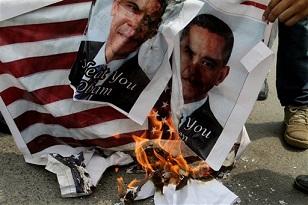 Only the makers of tanks and weaponry really like war. Oh, and of course the madmen who start them. Either it’s all about the big-bucks or the up-chucks. As Kendrew Lascelles said in his 1970 poem “The Box,” war’s like a “bouncy bumpy ball made up of flags and guns and all the tears and horror and the death that goes with war.”

My father, a decorated Ranger, participated in the Battle of the Bulge, was one of many who went up Hill 400 where only a few came down. An Army brat, patriotism’s in my bones, but I don’t love what being in the military means: keeping everyone safe, even if it means dying for our country. I lost many friends in Vietnam, declared myself a peacenik. Still, had we not become involved in WWII, how many more would’ve been gassed in Nazi-run camps? As a youngster, tears streamed down my cheeks when I finished reading “The Diary of Anne Frank” and learned she was one of the six-million killed by lunatics.

Americans prefer not to use force, but there are times we must. Evil triumphs if we turn a blind eye. Because we’re a powerful country, we’ve always found ourselves leading the world in doing what must be done. We must continue to have zero tolerance for weapons of mass destruction. WMD. Scary initials being bandied around since Syria obviously has them. Invisible deadly gas that doesn’t discriminate once released into the atmosphere.

The two World Wars took thousands of men and many armaments, continued overland and sea, crossing borders and invading all of Europe to bring peace. In this case, terror groups and insane nations are speeding to develop, acquire and let loose biological, chemical and nuclear weapons. It takes but a handful of these radicals to wipe out masses. When the air we breathe is filled with poison, we’re done.

One reason I voted for President Obama was his stand against war. However, in his talk Tuesday night, he declared there’d be no American ground troops and only limited strikes on military for a short duration if deemed necessary. Is my president breaking his word or by expressing his position on Syria, is he forcing the world to consider the consequences and pay attention to the use of WMD. Perhaps, with our country’s stand, as posed by our president, success may be achieved without ever firing a shot. We can hope.

Oddly, President Obama didn’t mention 9/11 even though he spoke on the eve of the anniversary of this most horrible act of terrorism committed on our nation’s soil––proof positive there are crazies out there that don’t value human life. Insanity, pure and simple, but very real. It also says something about President Obama making a stand for what he believes is right, without using fear-frenzy to draw support.

I read the pros and cons on Facebook and am saddened to read so much personal disrespect directed toward our president. No one will completely agree with all of our elected officials, but the hate and petty disrespect spewed forth is unpatriotic. Perhaps we need to hear our National Anthem played more often than just at ball games. Maybe we need to repeat the Pledge of Allegiance every time we say our prayers, lest we forget what a great country the United States is.

It’s not perfect. Our leaders aren’t perfect. However, we enjoy a freedom most the rest of the world will never know. Don’t let hate blind you. Every time we cut down our president, we’re chopping another hole in our wall of freedom. Disagree but don’t disrespect. Disrespect is despicable.

Barbara Sharik is a book author, newspaper writer and Clerk of Village of Bonita Louisiana

More in this category: « Thad Allen: "We Need To Proceed With The Relief Well, Talks Subsea Oil Which Is Worse, Hurricane Katrina Or BP Oil Spill? »
back to top