The case of Kate Middleton, William and curious George 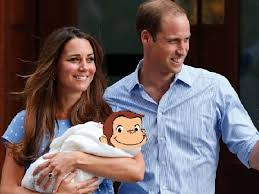 Baby pics are all over the place!

All we have seen of Prince George so far has been expertly obscured by his fluffy white baby blankie.

Where the heck is George?

Even the blurry and hazy and amateurishly-back lit photos snapped by grandpa Michael Middleton of Kate and William and George show George, yet again, almost viciously bound and bundled up like the baby Sakajawea bore and then carried around through the wilderness on her trek with the explorers Lewis and Clark. Baby face obscured. Kate held him up like a wooden dollie stage prop.

Where’s George’s little old man-face wrinkled self that all newborn babies have?

Why not hold him forward so that all can see?

Because this is how it’s been done. We, the subjects, get to take a gander at the golden infant who may one day rule over us. Or some of us.

Usually, the gandering takes place early on. Who can forget the post-birth photo of Prince William being supported up by his beaming parents? That royal, very professional pic clearly showed a scruntchy-faced newborn, eyes opened and struggling between wonder and outrage. About to shriek any minute, perhaps. Or give us a glimmer of a smile. But then, those eyes, darting all about in the very newness of life, focused on the camera facing him, and then we saw the expression of a real baby looking and seeing things for the first time. What a face! What a determined little scowl! What a defiant little stare! What wonderfulness! We adored the baby William. And we adored his parents.  We adored all three of them. We all ran out and bought gold and pearl heart necklaces like the one Princess Diana wore as she proudly showed off William to the world. We bought soft, silky jacquard blouses in champagne colors. We made our husbands wear open-collared white oxford shirts and gold signet rings.  We bought our husbands combs and told them to start parting their hair on the side.

We identified! And part of the reason we identified with this truly royal couple is because they shared their new life with us.

The life that they created.

Of that, we had no doubt.

The latest royal baby pics are out. Just pick up a "Hello!" magazine and take a look at the new grandchild of the Prince and Princess Michael of Kent by their son, Lord Frederick Windsor, and his Hollywood actress but-oh-so British wife, Sophie Winkleman (the plummy-accented yummy mummy of "Two and a Half Men"). "Hello!" shows tens of photos of the Kents, all in pink, relaxed and summery-looking, holding and goo-gooing with their first grandchild, Maud Elizabeth Daphne Marina, who is, uhm....something like 42nd in line to the throne.

And we can all clearly see little Maud’s scruntchy, wrinkly face!

She’s cute! She’s theirs! She is Maud, for sure. Grandma Princess Michael, Grandpa Prince Michael, and baby-daddy Lord Frederick all look pleased as punch with themselves, and with her.

Mommy looks a bit tired. Maud is pressing up against a set of boobies that not only resisted typical Hollywood enhancements, but seem ready to rumble into mommyland.

But looking back at Grandpa Michael Middleton’s messy photos of William, Kate and George, well, what stands out most is Lupo, their dog, who’s outgrown his own cute puppydom and, in doggie adulthood, has acquired an exceptionally large tongue, which is lolling around outside his mouth.

It quite takes one’s attention away from the baby nobody can clearly see.

Chat rooms at the London Daily Mail still buzz with the occasional outburst of questioning whether little face-obscured Prince George is the result of a surrogacy arrangement. It is the rumor that won’t die, the scuttlebutt that leaves a noticeable lump whenever it is swept under the royal carpet.

Why does the rumor persist?

Because so much about the Cambridges seems odd.

For one, thing, they really do seem to be hiding the royal baby’s visage! And what one doesn’t see, one can’t compare to anything or anyone. Not that there is much point in that, but why get the rumors rolling about so early on by using the swaddling disguise?

The next thing is that Kate seems to hold the baby up like a dolly-prop, and away from her own body. There seems to be a lack of closeness usually found in the first mother-child photographs.

The other thing is that Kate made a big to-do about being a hands-on mother, not having any nannies, not having any servants, living at Bucklebury with the folks. But now, the Daily Mail informs us that Buckingham Palace is now "styling" Kate into being just like Melinda Gates, the super-brainiac wife of billionaire Bill Gates, and creating some kind of foundation for Kate with which to do hazy good works of some kind.

But how can one do all that AND be a full-time mother without a nanny and servants?

Plus, Bill and Melinda Gates created their super-dynamic charity by using their OWN money. And while journalists and those always-unnamed "Palace sources" say that Kate Middleton is being groomed for this brainiac imitation in the style of the late Princess Diana, those in the know know that Princess Diana created her own brainiac persona only after being cast out and away by the Royal Family following her scandalous divorce from Prince Charles. Princess Diana got out and about for her brainiac good works mostly through the largess of obliging billionaires such as Mohammed Al Fayed, who ultimately hoped to marry Diana off to his eldest son, and create his own royal dynasty.

Why would the Palace want to take Prince George’s mommy away from him so soon?

There’s no good reason! Even if one hires a nanny or a nursemaid or, Jeez, just someone to clean the bathrooms, well, hiring servants and the like just means that a new mother has more time to play with her baby, to respond to him, to comfort him, to...be there.

So there is no good reason to try to play the role of a brainiac billionaire foundation creator! Not while little Prince George is so tiny and helpless.

This is what the chat rooms are saying!

Remember Princess Diana in the REAL sky-blue polka dot muu muu dress outside the hospital after having given birth? One can hardly forget how real she was. Her abdomen was bloated and large, swollen after just having given birth. Her breasts were large and engorged with milk. That blue polka dot dress hid nothing from our sight. She looked like one of those primitive "Venus" Ice Age earth-goddess statuettes found in French caves.

To look at Diana then, and to truly see her in all her bulbous earth-goddess glory, standing there with her newborn child and husband, was a primitive moment of splendor, wonder, of time standing still.

Compare that to what walked out of the Lindo Wing a few months ago–a pale imitation, a farce of something not quite real, trying to be the same but better, trying and, well, not making it. That hard-rounded belly fitting snugly in a dress that was no muu muu, but a dress created to consciously imitate something that had once been real. It feels–all of it–like a manipulation.

This is not the baby’s fault!

But the reason why some believe that this child may not be Kate Middleton’s child at all lies deep in having seen, before, that which was unmistakably, unambiguously real, and genuine–Diana, the earthy goddess, descending from Mount Olympus and deigning to live amongst us, bedding down with another semi-mortal of royal blood, creating a dynasty, and then...disappearing from our midst.

What is left behind?

Showing us Prince George’s face could invite comparison with another baby, born about the same time and place.

Not so far, they don’t. There is not yet a pic of the three like the one of Princess Diana in her soft, silky blouse, her tiny son resting up against her chest, cradled next to Prince Charles, both in thrall to infant William, whose face we could all see clearly. Instead, Michael Middleton supposedly snapped these "intimate family" pics with the bright sun behind, dappling the shade, and making George look, frankly, inscrutible.

Instead of showing us Prince George’s little baby face, the Middletons, Kate and William show us Lupo’s gigantic, lollygagging tongue–large as a slab of steak in a butcher’s meat case.

And they wonder why the Birth Truthers are still hard at it?

We look to Kate and William to share with us the life they created.

But right now, it all remains unseen--unfelt--unreal.

This is why the surrogacy rumors persist.

More in this category: « O’Keefe, Stevens Said In Crashed Plane In Alaska, Conditions Unknown Jindal's Commisioner of Administration Gets New Chief Of Staff »
back to top