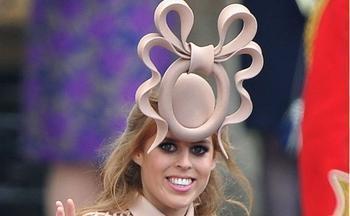 What can you say about those Facebook pics of Princess Beatrice that are now zooming around the internet?

Well, the first thing that comes to mind is that...they are kind of old.

Now, for those of us past the age of forty, six years, seven years, oh, it all begins to blend together, and we are just working out to maintain ourselves, going to the hairdresser to keep what we’ve got, going to the dermatologist to diminish the wrinklies and crinklies. Six years, seven years, we wouldn’t be so much different in our pics. We probably gave up breakdancing a while back and have only the vaguest notion of twerking or...whatever.

But back to Princess Beatrice and those Facebook pics.

Bea looks like a good Baptist girl having gone on one of those gospel-singin’ road trips with her friends in the choir. And anyone who’s been on one of those spirit bus trips knows that, when the Baptist girls get into the Mobile, Alabama motel room after a day of praising God and Jesus, well, the hair curlers and fancy lingerie comes out and they put on the forbidden make-up, style their hair all sexy-like, sip Crown Royal or whatever they can get without being seen to the point of being recognized as being good Baptist girls, and they have themselves a little ho-down. A hootenany!

And they always take some pictures.

Those snaps are proof of life.

What do Princess Bea’s bad-Baptist-girl pics show us?

That she is actually much prettier, frankly, than her formal photographs let on.

That she has a genuinely warm smile seldom seen in those fussy posed photos.

That she has some non-royal friends who seem to genuinely like her.

That she likes to let her hair down a bit and play when the cat is away.

That she can strike a sexy, unprincessy-posed pose, even with all (or most) of her clothing on.

Why is all this happening NOW?

Perhaps it is because attention that would normally be focused on matters of genuine dynastic concern, like the birth of baby Prince George, has been cut off. And the news that does come out about baby Prince George and his parents is so strange. And when Prince William and Kate Middleton do emerge from wherever they are hiding out this week, William seems weirdly focused on matters like saving rhinos so that a new generation of children can be entertained by them, and Kate seems, well, a bit disheveled and unfocused. And Aunty Pippa is tripping about the streets in stretchy tight streetwalker-leather pants with oddly-matched up accessories and a blinding white blazer fit only for the office job she doesn’t have. And when she’s not streetwalking about, Aunty Pippa is, well, the papers call it "canoodling" but my brother’s wife’s Uncle Tommy would call it "sucking face" in the back of a taxi with a feminine-faced Ken doll lookalike wearing too short socks and too short trousers who seems to enjoy the paparazzi attention too much.

So, no, Aunty Pippa isn’t wherever it is that William and Kate and George are hangin’ this week. Aunty Pippa isn’t making the tea in the tea pot, or cooing to George, or changing the nappies or making funny faces or doing any number of Baby Einstein infant genius exercises or playing Baby Bach or Beethoven tunes.

And Aunty Pippa isn’t wherever it is that Carole and Michael Middleton have gotten up to, either. Are the former air stewardess and her studman air steward-baggage handler lying low in Mustique? Have they taken out their profits from those exclusive "intimate" photographs Michael snapped of Baby George, Kate, William and Lupo (he of the slobbering giant dog tongue), and are now being wooed by Mustique real estate agents, sorting through this villa and that villa?

Six-year-old pics of Princess Bea being a naughty good Baptist girl are just not doing it for us.

And neither are those other hijacked Facebook pics of Bea’s long-suffering ardent boyfriend, Dave Clark, who was apparently photographed seven years ago on a post-college sojurn to South Africa where he posed, Rambo-style, with two pump-action shotguns lying across his chest that the Daily Mail claims somewhat exaggeratedly are "automatic weapons."

I mean, they are pretty big guns, for sure. Long barrels. Like what conservative Cuban American groups routinely use for training exercises in the Everglades when, one day soon, they will re-invade Cuba and take back their country.

But these guns also look markedly similar to what the Royal Family and many other use to blast away at the stag and the grouse and the odd creature moving about trying to save its own life or lead hunters away from its young. The same guns that Prince William and Kate and Carole and Michael used when the Duke of Edinburgh took them stag stalking a while back, before the wedding of the century. What "Mr. Clark" (as the Mail unfailingly calls Dave) is doing with the guns is unclear. But so far, we haven’t seen a lick of evidence that Dave is deeply attached to them in any dangerous way. And neither is my brother’s wife’s Uncle Tommy, who has remarkably similar weaponry that he uses to target Bourbon bottles and is always posing with it like Rambo.

No calls from the ATF yet, anyway. So if we haven’t committed my brother’s wife’s Uncle Tommy yet, why should we be overly concerned about Dave Clark?

Who’s behind this smear of Princess Beatrice?

Perhaps it is being done just to knock all those questions about Baby Prince George being the offspring of a surrogate mother and/or an egg and/or sperm donation.

If it were true that Baby Prince George is NOT the "child of the body" of the heir of the heir to the throne, then...who might be next in line? Assuming that one wants to avoid raising any other paternity issues that might jump out if Prince Harry, popular as his is, would replace William as heir to the heir. Who would be the next heir of the heir?

And if Beatrice were to marry Dave Clark, well, that would mean their future children would be standing right where Baby Prince George is now.

Who benefits from these old Facebook photos being bandied about now?

Someone who wants to derail that good-hearted sneak-partyin’ Baptist girl and her beau.

Why, Carole Middleton, of course. Do you seriously believe that Carole, who zombied out her own daughter to stalk Prince William for over a decade, derailing her own daughter’s personal plans and ambitions, will seriously not play hardball when it comes to the competition?

I mean, I am not pointing the finger and saying, "J’accuse!" to the Middletons. Nope. But I will answer the question that it is Carole and her family who now stand to benefit the most from smearing Princess Beatrice with some laughable old snaps of her being, well, a girl gone "wild" in Spain, making googy-eyes, showing (gasp) her cleavage, and, honestly, giving a smile that is fresh and unaffected and frankly surprising.

How did they do it?

I don’t know! But we are always being told how very enterprising the Middletons are, how very smart, how cagey, how hardworking, how...determined they are.

And this query doesn’t appear to be going to go away anytime soon.

More in this category: « King, Queen Obama’s Vacation Royally As US Economy Worsens Is BP Spill Recovery Fund Secure Despite $3 Billion Deposit? »
back to top