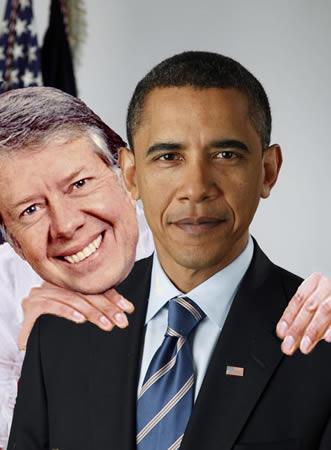 In an interview at a Habitat for Humanity event in Oakland, CA on Monday, former President Jimmy Carter lamented the current state of the nation’s economy.

According to Carter, "The disparity between rich people and poor people in America has increased dramatically since when we started. The middle class has become more like poor people than they were 30 years ago. So I don't think it's getting any better."

A miracle has truly occurred and Carter is actually correct for once. Under President Obama, the income disparity between the rich and poor has increased. The middle class today does resemble the poor of previous generations. The middle class faces tremendous financial burdens with little prospect for relief. Real wages are stagnant and costs are increasing. For example, under President Obama, gasoline prices have approximately doubled, hitting the middle class hard as they try to keep their financial head above water.

While Carter will not admit it, it is obvious to any fair minded observer that President Obama has been a disaster for our nation’s economy. While the official unemployment rate has dropped to 7.3%, the real employment picture is pretty desperate. Millions of Americans are working part time and holding several jobs to maintain their standard of living. This dynamic will increase as Obamacare will force many companies to limit their number of full time employees and transition more employees to working less than 30 hours per week.

Overall, an amazing number of Americans, 90 million, have left the workforce altogether. Many of these people are so discouraged with their job prospects that they have signed up for government assistance.

Carter knows plenty about economic misery. During his term in office, energy costs soared; and interest rates, inflation, and unemployment were terrible problems. In the Carter years, the labor force participation rate was a mere 63.4 percent. The nation recovered from these anemic labor levels thanks to the conservative economic policies of Ronald Reagan. His policies created 20 million new jobs in the country, giving a lifeline to millions of Americans who were devastated by the policies of Jimmy Carter.

Reagan’s conservative policies helped our nation grow for several decades. It set the stage for the prosperous 90’s and the budget surplus of 2000. Unfortunately, we have been moving in the wrong direction during the George W. Bush and Obama years and today we have a labor force participation that is once again only 63.4 percent, our lowest since the miserable Carter administration.

Under President Obama, real jobs are scarce. For every job that has been created by Barack Obama, there have been 75 new recipients of food stamps. In fact, food stamp usage has increased 50% during the Obama years to approximately 47 million Americans.

While the middle class is suffering, the very rich are doing well during the Obama administration. His Wall Street friends have prospered and his business buddies were rewarded with a one year exemption from Obamacare.

Of course, average Americans will not receive a similar break from Obamacare and they will have to sign up for health insurance or face a tax penalty, courtesy of the President.

Carter correctly identified the pitiful situation, but his solutions such as a higher minimum wage, will only lead to more unemployment. Carter can’t admit the truth, that the conservative economic policies such as lower taxes, less government spending and more personal freedom are the answer to our problems today.

It is clear when liberals like Carter and Obama are in power, the nation suffers. Hopefully, voters will remember this fact when the next presidential election rolls around.

More in this category: « Louisiana US Sen. Landrieu Endorses Richmond For New Orleans, Jeff Race Louisiana Sen. Landrieu Will Oppose Energy Bills Unless Relief For Gulf States »
back to top