The Makings of A Super Bowl in New Orleans 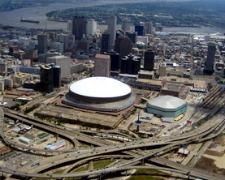 Imagine--only a few years away from the catastrophic Hurricane Katrina yet getting the opportunity to bid for the game of games, the NFL Super Bowl XLVII for 2013.

The big debates at the time was murder in the streets, if the Saints are for real, whether the city could maintain a recovery and if the New Orleans Hornets would remain in the Big Easy.  Today, the big controversies are still skyrocketing crime and whether the Hornets will call New Orleans its home but for now, the recovery is moving forward and the Saints are heavenly.

Still, the notion that New Orleans would compete for a record-tenth NFL championship, especially shortly after the roof literally collapsed on the Dome as the waters flooded the region,  would be just unfathomable.

Yet, thanks to the help of the Greater New Orleans Sports Foundation and numerous community leaders, the seemingly impossible is now a fact.  Next year, around this time, the buzz around town will be--who will play in what is now called the Mercedes Benz Superdome?

So, how did the city pull off the seemingly impossible competing against so many other NFL cities that do not have the daily headaches of a recovering urban metropolis?

Recently, Bayoubuzz interviewed the President and CEO of the Greater New Orleans Sports Foundation, Jay Cicero, about the big match how the city carried the ball over the goal line in a competition that easily might have been another New Orleans  “could’ve, would’ve, should’ve”.  Here is part I of a multi-part interview series with Cicero regarding the makings of the worlds’ biggest game.

More in this category: « Where will Kate Middleton and Prince William’s baby be born, a royal mystery? Jindal, Louisiana GOP do it the Washington DC Way »
back to top