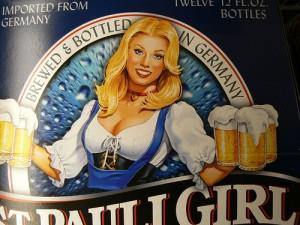 Yes. "Orangina," like the French fizzy orange drink in the funny little rounded glass bottle that looks vaguely like an orange. You have to shake it up a bit, because bits and pieces of orangey gooey stuff just sits of the bottom. You need to shake the bottle just a bit, so that you can see the orangey gooey stuff move about, like flotsam.

The Brits call Pippa, sister of Kate Middleton and sister-in-law to Prince William, "Orangina" because, well, like the cheerful little French soft drink, Pippa is ...orange. Most of the time.

Yes. Pippa is orange, as in orange-skinned. Pippa apparently likes to use self-tanning lotion, which dyes her skin a kind of burnt orange, and makes the whites of her dark eyes pop right off the page.

But this week, the Brits are instead calling Pippa- Orangina the "St. Pippa Girl," after the famous German "Bremen" beer, St. Pauli Girl, whose bottles always feature a buxom, Nordic-looking vixen whose hot boobies are bursting forth from the kind off slutty-looking blouse that is the upper part of a slutty-looking version of the normally staid and conservative national costume the Germans and Austrians call a "dirndl." In America, we say "drindel." We wonder why there is no "e" at the end. I mean, there are dirndls and there are drindles. Hitler’s Eva Braun used to wear one–Hitler being from Austria by way of Munich and all, where the dirndl is firmly ensconced as leisure wear. Even Monaco’s Princess Caroline used to wear one, when things were going well in her third marriage to Prince Ernst August of Hanover. When Caroline and Ernst would show up to eat the schnitzel and collect taxes from their fifes or receive homage or whatever it is that the Hanoverian Royal House is up to these days, Princess Caroline often wore national costume of, well, wherever Hanover is.

Haven’t seen Princess Caroline wearing one of those dirndls since Prince Ernst August was photographed swimming in Thailand with another blonde St. Pauli-looking girl.

Just like Caroline, Eva Bruan’s dirndl was rather conservative, in keeping with her national role as Germany’s First Mistress of the Great Psychotic Dictator of the Western World. Eva’s dirndl had a longer skirt than Pippa-Orangina’s, and did not show her boobies very much at all. The St. Pauli girl and her dirndl is much shorter than Eva Braun’s, and much sexier –the dirndl that launched a thousand tanks in World War II.

Anyway, not to put too much emphasis on it, but Pippa-Orangina isn’t married to a royal personage, and so has to earn money through other channels, such as her writing abilities, which we all know from her book, "Celebrate," and those hackneyed Vanity Fair articles, pretty much rests upon her sister’s royal marriage. So when Pippa-Orangina dons that dirndl, you can bet that she’s not going around to collect taxes from the fife, or receive homage.

No! Pippa-Orangina is donning that dirndl to pick up her check!

Oooh. Now it is all making sense.

So apparently, something like six months ago, Pippa-Orangina put on one of those booby-bustin’ dirndls, grabbed some steins of beer, and visited, well, not Munich (which is where Octoberfest is going on, right now), but the Austrian Alpine ski town of Kitzbuhel, just down the road a bit from the Austrian Alpine town of Braunau-am Inn, where Eva Braun’s dirndl-loving boyfriend Adolf was born.

That is where the rich now go to ski.

Kitzbuhel was also Leni Riefenstahl’s hideout when her Berlin house was badly damaged during an Allied bombing in 1943. Albert Speer helped the infamous German cinematographer escape to a cozy little chalet in Kitzbuhel between filming her pro-Nazi propaganda films. Leni would subsequently return to the haven of Kitzbuhel periodically, first when Hitler began drooling just a bit in 1944, and then in between being arrested and accused of war crimes by the Americans and then the French in 1945. Although Leni later died in Berlin, Kitzbuhel became her home.

Brrrr! I’m shivering, even though I am wearing something much more substantial than that dirndl booby blouse!

In Kitzbuhel, to make ends meet and keep tourists amused when there is not skiing, the locals have created something called "Jahrmarkt," which like a Munich Octoberfest that takes place in "late summer" (Orangina-Pippa tells us), and is, in Pippa’s opinion, "far superior to the beer fuelled [sic] mania of Munich."

But why is Pippa dissing Munich’s Oktoberfest? Hitler would be so annoyed! And why did the Daily Telegraph wait until now–Oktoberfest–to publish Pippa-Orangina’s article about something she did during the summer?

Perhaps its just part of a campaign to paint Pippa-Orangina not orange, but positive, in a more friendly light, than she has recently received. Look! Pippa-Orangina travels! Pippa-Orangina eats a piece of German sausage! Pippa nibbles on a German pancake! She tastes a strudel!

What we don’t see, curiously, are any recent photos of Pippa-Orangina helping Kate and Prince William move into their new Kensington Palace apartment, or of Pippa-Orangine making little Prince George smile, or of Auntie Pippa carrying him about in one of those Snuglis. Flip the page, though, and we see Pippa-Orangina looking actually very orange-colored, and standing before a very large pile of very dead birds somewhere in Scotland, where the deer and the aristocrats play when the aristos are not out skiing at Kitzbuhel.

Probably, Pippa’s Kitzbuhel piece was published now because she needed her paycheck to buy that lacey-marine blue cut-out lace dress and matching marine hat with peacock feathers atop– the outfit she wore to the society wedding of Lady Laura Marsham and James Meade a few weeks ago. With marine blue shoes and a coordinating clutch bag Pippa’s ensemble is all so matchy-matchy that I actually feel sorrow for the peacock who surrendered parts of its famous tail so that Pippa-Orangina could have a hat indicating her not-quite royal status. As in ancient Persia.

See, if writing and authorship were as important to Pippa-Orangina as being marine blue matchy-matchy is, then Pippa would have stayed behind in Kitzbuhel just a bit, and found something really worthwhile to write about between bites of bratwurst and little sips of Zerbenschnapps. Where did Leni Reifenstahl live when she was in Kitzbuhel, anyway? Pippa-Orangina could walk its ancient, medieval streets and show us. What does Kitzbuhel look like? Pippa-Orangina could squeeze off a snap or two, and show us. Is there a public library in Kitzbuhel where Leni used to hang her Berlinesque hat? Where did she go to write? What was her favorite café? Are there any photos of Leni prowling about in Kitzbuhel that Pippa might unearth? What ever happened to "Tiefland," Leni’s epic film that mysteriously disappeared in Kitzbuhel?

Why can’t Pippa-Orangina show us anything real?

Leni had kept an enormous film library complete with an editing and screening room in Kitzbuhel. What happened to that, one wonders?

Did Leni ever wear a dirndl?

There are so many questions for Pippa-Orangina to ask and answer in Kitzbuhel that are genuinely interesting. Instead, writes, Pippa, she really wants to return to Kitzbuhel sometime in winter to eat in some higher-end restaurants and do some skiing herself, her orangey-fake-tanned skin popping out against the burning white of the ice and snow.

But not to show us how the snow fell before the never-closed eyes of Leni Reifenstahl in Kitzbuhel. Did Hitler ever come here?

We don’t know, we don’t know. Not yet. And these questions aren’t even popping into Pippa-Orangina’s hairy brown head. Instead, all we get is Pippa-Orangina matchy-matchy, kitschy-kitschy, boring-boring. That and the fact that somewhere in London, a peacock is missing part of his tail. And a drindl is working overtime to contain all of Pippa’s bustiness. That is all.

What is there really to write about in Kitzbuhel?

There is always bit of real life that the terrible, wonderful, horrible Leni lived while she was there, and how she loved the ice and snow.

Her first films were ones she acted in rather than directed. "The Holy Mountain" was about a love triangle, but the fourth star was clearly the mountain in Bavaria where the scenes were filmed– so much so that an entire genre of German film called "mountain film, or bergfilm" arose from it. One of Leni’s most interesting works was that elusive "Tiefland," filmed almost entirely on in the Bavarian mountains. Based upon a Spanish story and opera, Leni used gypsy –Roma and Sinti– children who she selected by weeding through doomed children in temporary "relocation" camps that were just rest stops on the way to Auschwitz. When Leni fled from Allied bombing raids by running back to Kitzbuhel, she took "Tiefland’s" reels with her. She was never able to fully finish it, and when she was taken prisoner and not allowed to return to Kitzbuhel immediately, some of the film was lost.

Eventually, the film was released back to Leni, who finished it as much as she could–decades later, when all the little Roma and Sindi children who played the Spanish villagers had become part of the Holocaust’s murderous statistics forever. What, one wonders, might Pippa-Orangina think of it all?

Some people psychologize that Hitler’s character is that of Tiefland’s wolf. Others supsect that Hitler was the evil aristocrat. Now, that part might be interesting. But to write about it, Pippa-Orangina would have to actually undertake something, other than tasting things brought before her for a fee and stuffing herself into something that looks more like a U.S. football cheerleader’s outfit than a national costume.

Pippa-Orangina and Leni Reifenstahl in Ktizbuhel. Now that would be an article worth reading, worth writing, and even worth getting paid for.