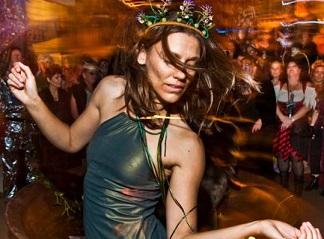 Want to know how young entrepreneurs have made it in the tech world?  Thinking of Christmas in the big Easy, or taking a cruise, perhaps?  How about celebrating two Holloween's?

If your answer is "yes",  here is where you want to be in today's edition of Round Louisiana.  Round Louisiana is a compilation of press releases and other news information focused upon the wonderful not-for-profit organization's endeavors and those within the business community.

Building on the Foundation: A New Orleans Tech Future That Will Drive the Economy

Get in touch if you have any questions, and feel free to bring any and all friends and forward this invite around to your heart's content.

As background (or if you're just in the mood to do some reading) the New Orleans Business Alliance's ProsperityNOLA report and  GNOCDC's New Orleans Index at 8(or take a look at a video summary here if you are pressed for time) are great resource to take a look at in order to prep for tonight.

One day of Halloween not enough for you? Do you have between four and seventeen costumes planned for this year, but not the occasions to bust them all out? Well, have no fear. We've got an event where the costumes are amazing, the music and dancing is wild...and it's all for a good cause.

Anba Dlo is an annual community festival that is hosted by the New Orleans Healing Center on St. Claude. Lasting fromnoon until everyone falls asleep, there's a symposium on the presentation of water in the city, followed by a Halloween costume parade, then 15 bands on three stages will get going blasting tunes, and everyone is going to dance until they collapse. It's one of the most fun events of the year.

So come join the Anba Dlo...ans? ers? and have a blast.Tickets are only $20, but we're giving away three pairs of free tickets to 504warders here. It's a wonderful kick-off event to get everyone in the Halloween spirit, all while benefiting New Orleans Community Outreach, a local organization that helps local residents access the healing center's services and programs that they need most. We'll see you there.

Christmas in New Orleans at the Morial Center

Christmas in New Orleans has always been a magical time, and now a dazzling, family-friendly seasonal event that combines Louisiana traditions with state-of-the-art technology offers another opportunity to get into the holiday spirit.

The neutral ground along Convention Center Blvd. between Julia St. and Poydras St. will set the stage for “New Orleans Christmas in the District,” a series of holiday-themed large-scale light displays celebrating the culture and history of New Orleans, climaxing at the Convention Center’s new pedestrian plaza.  Over 70 trees will be lit up in festive holiday colors with unique sparkling lights installed at the tops of many of the palm trees, creating a one-of-a-kind holiday environment.

The highlight of the display resides at the main entrance to the New Orleans Ernest N. Morial Convention Center where a light show consisting of digitally animated lighting effects synchronized to music will entertain visitors. The display will include a unique digital Christmas tree, thousands of channels of lights that dance to the music and strobe lights that will surprise and delight visitors at just the right moments during the show.

The New Orleans Ernest N. Morial Convention Center is funding the event as a part of its mission to bring visitors to town, and is expected to inspire all the residents and businesses in the Warehouse/Arts District to embrace the event and help grow it annually.

“We invite local residents and visitors to bring their families and friends to dine in the Warehouse/Arts District, then take a stroll or drive along Convention Center Boulevard to enjoy the light display of Christmas in the District,” said Bob Johnson, President/General Manager of the New Orleans Ernest N. Morial Convention Center. “ We also encourage all Warehouse/Arts District business and residents to join in the Christmas spirit by putting up their own festive lights and decorations in their windows and outside of their buildings. If we all work together, this event could rival some of the largest holiday events in the country.”

New Orleans Christmas in the District begins Saturday, November 30, 2013, and runs nightly through January 6, 2014, and is free and open to the public. The event will complement the annual “Christmas New Orleans Style” celebration, and will continue to evolve annually.

Norwegian Jewel to sail from New Orleans through April

MIAMI – October 10, 2013 – Norwegian Cruise Line continues its commitment to New Orleans with the inaugural arrival thisSunday, October 13, of Norwegian Jewel, the largest and newest ship from the line to homeport in the Crescent City. The 2,376-passenger ship features Norwegian’s signature Freestyle Cruising with 16 dining options, 13 bars and lounges and exclusive Nickelodeon programming and activities.

“We’ve taken the cruise experience up a notch in New Orleans this season by bringing one of our Jewel class ships here,” said Kevin Sheehan, Norwegian Cruise Line’s president and CEO. “Norwegian Jewel enhances the cruise experience for guests with a wide range of amenities and accommodations to choose from.”

"The Norwegian Jewel demonstrates Norwegian's steadfast commitment to New Orleans with a newer and larger ship," said Gary LaGrange, Port President and CEO. "Cruise passengers sailing out of the Port of New Orleans have yet another exciting option with this beautiful ship and we look forward to continuing our relationship with Norwegian Cruise Line for many years to come."

Norwegian Jewel offer guests the opportunity to sail in style in The Haven, Norwegian’s exclusive and luxurious accommodations which include the largest suites at sea – the 5,000 square foot, three-bedroom Garden Villas. Guests can dine around the world with 16 dining options including French, Asian, American, and the line’s newest restaurant, Moderno Churasscaria, a Brazilian steakhouse. Norwegian Jewel also features three swimming pools; six hot tubs; a contemporary spa and fitness center; sports deck with basketball, volleyball and tennis court; the Jewel Club casino; and spectacular stage shows like Le Cirque Bijou and Band on the Run in the ship’s Stardust Theatre.

Onboard Norwegian Jewel, families will delight in the exclusive Nickelodeon programming. Activities include the Pajama Jam breakfast with the characters, where kids – and adults – can eat, sing and play with SpongeBob SquarePants, Dora the Explorer, Patrick, Diego and more; meet and greets with popular Nickelodeon characters, including SpongeBob SquarePants, Dora the Explorer; and other family activities offered, including Nick Jr. story time, family trivia and special arts and crafts sessions.

For a limited time, as part of National Cruise Vacation Month, guests will receive up to $250 in onboard credit per stateroom plus a reduced deposit on new bookings made by November 1, 2013. For more information on Norwegian Jewel, contact a travel professional, call Norwegian at 888-NCL-CRUISE (625-2784) or visit www.ncl.com.