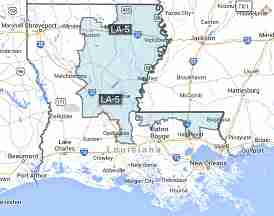 This Saturday the winner of the special election for Louisiana’s Fifth Congressional District is unlikely to be determined, but in that case we may have a pretty good idea of who that might be eventually.

The sprawling territory is being contested by over a dozen people, and despite its short campaign window they have attracted well over a million dollars in donations. Way out in front, each having raised a bit over a half million each, are Republicans state Sen. Neil Riser and state Rep. Jay Morris. With a little less than half of their totals is Republican Public Service Commissioner Clyde Holloway, a former member of Congress. At half of that again sits state Democrat Rep. Robert Johnson. Less than half of his was Democrat Weldon Russell, a member of the state House from 1984-88, and dragging the rear of those who raised anything significant enough to report was Monroe Mayor and Democrat Jamie Mayo, who had raised about a thirtieth of either Morris or Riser.

Which means that Mayo is a good bet to make the almost inevitable general election runoff. The district has about 33 percent black registration but a history of black turnout trailing white, by 5 percent in the last regular congressional election. Given this election may not even hit one-third of the last election’s 68 percent overall turnout, according to early voting numbers, that gap might increase even more, especially as no other races of consequence are on the ballot (sorry, Ouachita Parish Justice of the Peace candidates, the one guy who filed for mayor of Glenmora, etc.) and none that might stimulate black turnout.

Then again, the smaller the numbers of voters get, the more likely a voting bloc that remains united will get its preferred candidate in a runoff. Only one other candidate who is a black Democrat like Mayo, state Rep. Marcus Hunter, is in it and he has reported negligible fundraising and spending on his campaign. He’ll probably peel off a small number of anti-Mayo black voters on principle, but since Mayo is not the favorite to win in the end few may be likely compelled to show up. And otherwise blacks in the district will line up solidly behind Mayo despite his relatively low amount of expenditures, for word-of-mouth from black political elites recommending a black Democrat is essentially free. Even with reduced stimulation for black turnout and small cracks in his potential support, do not be surprised if he pulls a quarter of the vote.

This leaves the matter of an opponent, and that would appear to be from any of the three Republicans who reported revenues and expenditures. At least Republicans everywhere can breathe easier that the (to them) apocalyptic scenario of Mayo and Johnson making a runoff seems very unlikely. The three major GOP candidates have not spent a half a million bucks viciously attacking each other, which might drive votes from all three of them, nor has Johnson run a very effective campaign with Russell running more vigorously than expected, which probably will prevent him from collecting enough of those votes to move on. Now it looks to be a matter of which Republican can ace out the other two.

While Holloway lags the other two in money, he has advantages in that he is from the southern Rapides Parish anchor of the district and has networking from approaching three decades in politics. Still, he must share a bit with Johnson and that area has a smaller base than have Riser and Morris based around the Ruston-Monroe corridor. All three claim to be outsiders to Washington, DC, but he and Morris also assert their independence from the presumed powers that run the state, so if there’s such a segment of voters out there, they must split that as well.

Morris has superior resources than Holloway, but when removing their own contributions from the mix, he doesn’t lead Holloway by much. And while more cash is better, that both are so self-funded indicates that activist networks have not been that jacked about their campaigns, at least compared to the alternative Riser. In contrast to them, he has engaged in no self-financing and has gotten an array of endorsements, the latest from the second-ranking U.S. House Republican.

A broad and generous donor base with high-profile endorsements serve as proxies for enthusiasm among the electorate. Except for the very few who give to all acceptable competitive candidates, donors are sure voters and advocates to the undecided about that candidate. Endorsers do the same without the money. It may be just a couple of people here or there, but it adds up, providing the difference to put Riser ahead of the other two.

It’s possible that Holloway or Morris could ace out Riser, more likely Holloway, but more likely than this would be Holloway edging Mayo. That mostly depends upon how well Morris will do. Mayo and Hunter, mostly Mayo, should take 25-30 percent of the vote right there, and Riser should take 30-35 percent. If these higher ends are realized, Morris almost certainly pulls enough from the remaining 35 percent to keep Holloway out. Even at the lower ends, if Morris can grab 15 percent, Holloway probably is on the outside looking in.

So at this point Riser and Mayo seem the best bets to continue the quest. A result without Riser would point to poor campaigning on his part and/or excellent campaigning on the part of Holloway or Morris, and one without Mayo would show the lack of seriousness Democrats, particularly blacks, lent to the race where the very likely eventual winner would come from any of three conservative Republicans who have few differences in issue preferences.

by Jeffrey Sadow...first published on his blog, Between the Lines