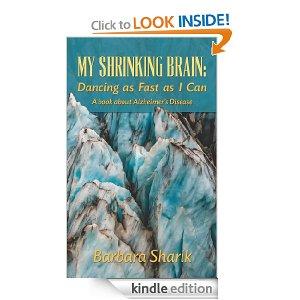 Although I usually find humor and lightness in everything because it makes even the darkest nights bearable, this column introduces a serious subject. This week I published MY SHRINKING BRAIN: DANCING AS FAST AS I CAN, A book about Alzheimer’s disease.

Several months ago my neurologist, Dr Vipul Shelat, asked if I had family here. Shortening the long story, he wanted daughter Theresa to accompany me on my next visit. This was April. This was when he used the “A” word: Alzheimer’s. Early onset. Whoa Mama!

I’ve been seeing him after suffering a stroke apparently caused by a reaction to Mobic mid 2010. Left with tremors, Dr Kahlil sent me Dr Shelat. Parkenson’s disease was suspected. The testing began. He said there was something on one side of my brain. We would monitor it.

At this same time my daughter-in-law Cindy had developed a tumor on her brain. Inoperable, she was given mere months to live. However, even though it’s wrapped around her brain, caused speech and motor problems, it stopped growing. Here it is, 2013 and we spoke on the phone just this morning. She’s living on borrowed time, but she is living. She underwent some treatment, found others too horrible to bear and ceased. We try to visit by phone at least once a month. She’s my late son Tony’s widow, and the mother of my only grandchild, Alisha.

We commiserated about our brain ailments. A year passed and Dr Shelat prescribed meds for seizures, because six months after the stroke, I was back in the hospital suffering from seizures. Brain going wrong. He also eventually prescribed meds for memory problems and used on Alzheimer’s patients. I didn’t think much of it because I knew seizures wreaked havoc and I trusted his judgment explicitly.
We rocked along. I underwent several more tests over this period of time. With the last testing, he reached his conclusion. That’s when he asked to speak with Theresa. Early onset Alzheimer’s Disease.
I put aside the novel I was working on, a sequel to NORMAL, a psychological thriller. I started writing a book about Alzheimer’s Disease, as experienced firsthand. My forte is humor. Therefore, I present the book with facts, but interspersed a lightness. Ann Hamilton of El Paso supplies an array of symbolic interior photographs. Robert Arrington creates a cover featuring Alaska’s Knik Glacier; glaciers melt just as brains shrink. Mona L. Hayden, publicist, and editor ofLouisiana Road Trips, provides a touching preface.

The book doesn’t give medical advise but instead provides current but limited information available about this unrelenting disease. It includes a number of firsthand statements from people who have dealt with loved ones suffering. It gives insight into what can be expected, and how best to deal with it. There’s no cure. It will continue to advance once it’s manifested itself. The book includes useful information such as how to draw up a Living Will, plus contact numbers for various Alzheimer’s agencies.
Not a big book, however, it’s an important book. It’s currently available at www.amazon.com and soon can be downloaded as an eReader on Kindle. A copy will be at the Morehouse Parish Library soon, and I have copies also. For more information email me at[email protected], visit me on Facebook or call me at 318.823.2668.

Sharing a quote: “When everything stops being funny, I will be done. I will turn in my house key and move on down the road. The long and winding road. You will know me by the fist being shaken toward the heavens and the tears streaming down my wrinkled cheeks. You will know me even when I no longer know myself.” Barbara Sharik.

Bayoubuzz Note:  Barara Sharik has written a few columns for our website.  We wish her the very best and know that her words will help others

Here is a link to the book