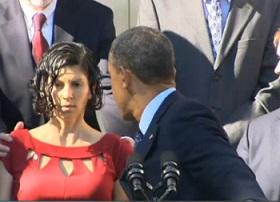 Yesterday, at the Rose Garden, as the President was endlessly talking about his signature program, Obamacare, a young woman standing behind him nearly fainted. The victim of the long winded President, Karmel Allison, has diabetes and is pregnant.

It is mind boggling that the White House would force someone in her condition to stand and endure an Obama speech. Unfortunately, for the President, his entire speech was overshadowed by the drama on stage. Instead of a well choreographed presentation of the wonderful aspects of Obamacare it was another disaster for this ill-fated program.

In fact, the staging strategy for the President’s speech was as well planned as the Obamacare roll out  Three weeks into Obamacare and Americans still do not know how many enrollees have successfully navigated this glitch riddled website. While many Americans have wasted an entire day trying to log on to the website, others have been placed on hold for hours on the program’s hotline.

Some experts have called for the entire website to be scrapped, while others have predicted that millions of lines of code will have to be replaced.

Needless to say, this debacle demonstrates once again that government is incapable of operating any program efficiently. The Obama administration successfully passed the Affordable Care Act in March of 2010, squeaking out a narrow, partisan victory in Congress. Knowing that so many Americans were uncomfortable with Obamacare, it would have made sense for the administration to present a flawless launch for the program on October 1. Instead, despite over 42 months of preparation, the roll out has been a nightmare.

This program has been placed under the umbrella of the Department of Health and Human Services (HHS). Many in Congress are demanding answers from HHS Secretary Kathleen Sebelius, while others, such as Congressman John Fleming (R-LA) are calling for her resignation. After first ducking Congress, Sebelius has finally agreed to appear next week for what is surely going to be a confrontational exchange.

It is so bad that Democrats and the White House and now hinting that a delay in the individual mandate will be forthcoming. This is what Republicans were asking for in the budget debate, but the President refused the supposedly outrageous demand. Ironically, Democrats may eventually have to relent to the delay after realizing that Americans cannot be penalized for not buying health insurance on an exchange that does not work.

It is such a disaster that, after three weeks, New York, among other states, can boast almost no enrollees. In other regions of the country, such as Louisiana, states are providing consumers very few, if any, health insurance options. The President claimed his plan would offer lower prices and plenty of options for Americans. In reality, Americans are losing healthcare coverage due to Obamacare, premiums are rising rapidly and options are dwindling.

In just two states, Florida and California, 460,000 people who buy their own insurance have been dropped by their insurers. These unfortunate souls will be forced to use healthcare exchanges that do not work.

Clearly, in the first few weeks of Obamacare, the President’s program has created more uninsured Americans. It is no surprise that experts predict that 30 million Americans will still be uninsured by 2016.

So, a program that will cost trillions of dollars, takeover our health care industry, drive our private insurers out of business will fail in its basic mission to provide insurance to the uninsured.

No wonder Ms. Allison fainted yesterday. In the uncertain days ahead, Obamacare will cast a fainting spell on untold millions of victims.

More in this category: « President Obama Briefed On Bonnie And Oil Vitter, Melancon Push Louisiana US Senate Polls, Slam Each Other »
back to top