The feint-truths about Obamacare are killing US 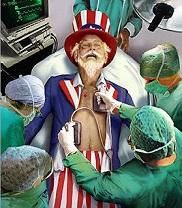 American consumers have been misinformed by both sides of the political aisle over the issue of what Obamacare will be and what it won’t be.   We have been told by the administration and by the President himself that we could keep our policies if we like them.

Also, for political purposes, the other side has focused exclusively upon Americans by the millions losing insurance coverages due to Obamacare.  We have been constantly cited that those terminated (and everyone else) will either go uninsured or will obtain policies with exorbitant premiums and higher co-pays.  Of course, those anti-Obama doomsayers will also continue to tell us that we will have worse medical care, horrible unemployment, fewer fulltime jobs and a litany of other calamities—all brought about by this version of healthcare reform.

While I wish I had their crystal ball to project what they absolutely know is going to happen,  there is one thing I do know for a fact.  They rarely mention anything about the consumer protection benefits of “no pre-existing conditions” coverages that have destroyed careers and families in the past.

Yet, when these opponents are confronted about that incredible benefit now being law , almost to a person,  they will say, yes, we need that.  But, then, when asked for a plan how to pay for it, they are either only able to provide generalities or no plan at all.

We all know that Obamacare so far, as it relates to the exchanges, is a unmitigated disaster.  Yes, the train wreck.

President Obama has made the situation worse by not honestly telling us the entire truth.  Sure, it is true that he might not have been able to pass his legislation or be re-elected, but he clearly misled us and now is facing the penalties.  We do not believe him.  It will be more difficult for him  to pass future legislation in the future.

His explanations this past week in apologizing and then defending himself has been shabby, at best.   He should tell us why he said what he said—not simply hiding behind his claim that those insureds who have been terminated will get better overages due to his plan.

At the same time, we should not put the nightmare burden upon the Obama administration, only.

The insurance companies, as an industry, ought to tell us why they did not come forward many months ago or years ago to tell us that they would be terminating all of those policies.   There are many questions to ask, all based upon one major uncertainty--when did they know what they now know?   Even if they were being threatened by the Obama administration not to disclose their future intentions (a claim being made by the Obamacare opponents), they had a greater duty to tell us the truth.

In many ways, the insurance companies are now paying the piper for what they wrought.    Had they offered certain consumer protections, Obamacare, as it is now, never would have happened.   But, due to their monopoly and their single-minded goal to ensure profits,  they refused to provide Americans what we wanted, so dearly—basic consumer insulations-- such as protections against pre-existing conditions exclusions and denials and limits on lifetime caps.

They could have kept all of this within the private sector, but, due to corporate profits, they played their cards wrong.  Now, we are now left with this mess, not knowing really who is telling us any truths.

Americans deserve much better.  We deserve for our elected officials to be honest about what they know and what they really don’t know.  If they really cannot read the tea leaves with the certainty that they claim, they should be forthright and  tell us so.  They should stop parroting party lines, talking points or speaking what the lobbyists are paying them to say.

Obama has lost credibility and no matter what he does, he will never be able to achieve our confidence in his words.

Those defending him to the hilt are playing a fools game.

Folks, elections are approaching.  It is time we hold all of our politicians responsible for only telling us what we want to hear.  It is time they do more than advocate what they are told to say.   Some of us  need to dig deep inside of our own bodies and soles and start dispensing us the truth, the Democratic or Republican truths.  Only repeating political slogans and claims might help their own careers, but, ultimately, it impairs our own judgments as a nation.

Healthcare reform is desperately needed, not prescriptions issued by our friendly politically-motivated,  “Dr. Feelgoods”, who then  extend out their palms for green grease.

Our own personal and nation’s healths are at risk.  Just maybe, just hopefully, a few of our leaders and more of us stop serving and drinking the koolaids to satisfy our own selfish thirsts.  Healthy doses of truth serums might be more distasteful in the short run, but would surely serve all of us, so much longer and infinitely so much better.