No Obama magical apology tour rolling out in New Orleans, US 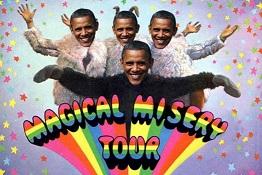 President Obama began his first term in office with a worldwide apology tour. In a visit to Strasbourg, France, the President claimed that the United States of America had shown “arrogance, been dismissive, even derisive” in dealing with Europe.

In a speech to the Turkish Parliament, Obama said, “The United States is still working through some of our own darker periods in our history.” At the Summit of the Americas, the President remarked that his country has “at times been disengaged, and at times we sought to dictate our terms.”

This apology tour was unprecedented as no other President had been so critical of his country on foreign soil. It was an odd way for President Obama to begin his term as he upset millions of Americans who see this nation not as arrogant, but as a beacon of hope and freedom for the oppressed around the world.

While the President is obviously comfortable issuing questionable apologies in foreign countries, he has been reluctant to express contrition to the American people, who actually are the only ones deserving of an apology.

The President should have apologized for the lies about “shovel ready” stimulus jobs, the gun running Fast and Furious operation, the Solyndra scandal, and the Benghazi terror attack cover-up. Not surprisingly, this arrogant President never expressed remorse for these mistakes, always blaming others. However, in the case of Obamacare, it is impossible for President Obama to hide.

There are at least 29 different occasions, in speeches and interviews, in which President Obama made false promises about his cherished healthcare program, Obamacare.

These are documented cases in which the President claimed that people would be able to keep their doctors and their health insurance. He also promised Americans that Obamacare would not include tax increases and that insurance premiums would decrease in cost, all lies.

In the wake of the passage of Obamacare, millions of Americans have not seen relief. Instead, they have lost their health insurance and had mounting frustrations dealing with an Obamacare website that does not work.

It has been a brewing political nightmare for President Obama, leading to falling poll numbers. In the latest Gallup poll, the President has a mere 39% approval rating, the lowest of his presidency. It is even lower than George W. Bush’s rating at this time in his presidency.

It became too much of a problem for the President to ignore, so he had to face the music this week and actually apologize for his lies.

In a NBC interview this week, President Obama said, “I am sorry that they are finding themselves in this situation based on assurances they got from me. We've got to work hard to make sure that they know we hear them and that we're going to do everything we can to deal with folks who find themselves in a tough position as a consequence of this.”

It was a half hearted apology at best, a case of offering too little, too late. At this point, millions of Americans have already received their insurance cancellation notices. Obama’s apology is little solace to Americans worried about how they can afford skyrocketing insurance costs, driven higher because of Obamacare.

As bad as the situation is today with Obamacare, it will only get worse when the employer mandate kicks in next year. When employers face the additional expenses of mandatory health insurance coverage, massive layoffs will ensue. Other Americans will have to accept jobs that have been transitioned to part-time status.

With such a disaster of his own making, President Obama owes every American an apology. Instead, today, he visited the Port of New Orleans to change the subject. He discussed ways to boost exports. While this is undoubtedly an important issue, it is a diversion from the main issue occupying the minds of most Americans, healthcare.

It is no surprise that vulnerable U.S. Senator Mary Landrieu (D-LA) did not appear with the President at the Port. In previous years, Senator Landrieu never missed an opportunity to meet with President Obama and tout his policies as she has voted with the President an astounding 97% of the time.

If the President had any decency, he would start a nationwide apology tour, visiting every corner of the country to express his sorrow for the disastrous rollout of his signature legislation and the lies about health insurance.  It would be the least he can do in light of the pain and suffering he has caused for millions of Americans.

Sadly, we will never witness genuine remorse from President Obama, only phony apologies in TV interviews.

Obamacare is the centerpiece of both his agenda and his entire administration. He will never admit failure or sacrifice that program; it would be too devastating to his ambitious goals. For the President, Obamacare must be protected at all costs, so an apology tour will never occur, at least not one on American soil.