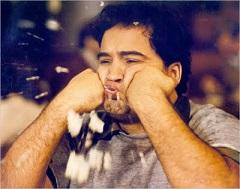 As we approach the last Thanksgiving prior to the elections 2014, you can bet extra helpings of cranberry sauce and a scoop or so of corn dressing  that the candidates currently running for the U.S. Senate spot for the State of Louisiana hope their surrogates continue to carve up their opponents like a well-sliced butterball Turkey.

The forces supporting Democratic Senator Mary L. Landrieu are pushing the proposition that her major Republican opponent, Congressman Bill Cassidy is far from appetizing and is really warmed-over "mush" in disguise.   In turn, as much as Landrieu might be trying to unknot herself from the president and his embarrasing signature legislation, Obamacare, the Republicans are not about to back away from what could be called the biggest legislative turkey in modern US history.

While not quite invited to dinner by the party powers, Tea Party favorite Rob Maness is eating up all the attention he's getting as the "Not" Cassidy. However, reportedly, some mainstream local GOP'ers and media types are claiming Maness has a few hogs back at the farm.

So, who's leading in this negative turkey trot campaign?

You tell us.  Here's some of the latest found in our inbox, leading off with a pro-Landrieu update on the ACA law Landrieu and other Democrats simply cannot afford to last as a political issue:

Today, U.S. Senator Mary L. Landrieu, D-La., welcomed Sens. Diane Feinstein, D-CA., and Jeff Merkley, D-Ore., as cosponsors of her Keeping the Affordable Care Act Promise Act. So far, five Senators have joined Sen. Landrieu in support of the bill. This legislation will keep the promise that was made when the Affordable Care Act was passed, that if you liked your health insurance, you could keep it.

Unlike other proposals in the House and Senate that either keep the promise for only one more year; allow new people onto grandfathered policies; and permit insurance companies to rescind coverage, drop young adults from their parents’ plans and reinstate lifetime caps; Sen. Landrieu's bill is the only viable, serious bill that keeps the promise and strengthens the Affordable Care Act. It will also provide policyholders with information from their insurance company as to which parts of the policy do not meet minimum coverage standards made available in new plans, such as hospitalization, laboratory services and prenatal care. This will allow consumers to make informed decisions about their health plans. Learn more about the bill.

“With the support of Senators Feinstein and Merkley, momentum is building to ensure that individuals who like their health insurance can keep it. That was the promise we made when we passed the Affordable Care Act, and our growing chorus is saying that's a promise we should keep. Many individuals may find plans in the Marketplaces that offer improved coverage at a good value, but if they like their current plans, they should be able to keep them,” Sen. Landrieu said. “The benefits of the Affordable Care Act are worth fighting for, and I'm very happy that a growing coalition supports this smart, targeted fix to strengthen the bill.”

Sen. Landrieu’s legislation will allow individuals to keep their current health plan at their choice as long as policyholders stay up-to-date with their payments. While many consumers may choose to purchase new plans once they learn of the additional benefits and value available through the new Marketplaces, they will be able to keep their current plan if they like it.

When Maness, a political rookie, first threw his hat into the ring to challenge Louisiana Democratic Sen. Mary Landrieu, he did not make much of a splash. Republicans already had one candidate in the race, Louisiana Republican Rep. Bill Cassidy, and the $4 million he had raised made Maness’s low six-figures look paltry.

But last week, Maness got the endorsement of the Senate Conservatives Fund.

“That changes the picture dramatically,” Maness said of the endorsement. The truth in Maness’ statement is evidenced in his fundraising: Maness raised just over $100,000 over the past two quarters. After the endorsement, he told The Daily Caller, “we’ve raised more than half of that in the last five days.”

Article pushed online by Andrew Zucker of the Campaignforla.com, a pro-Democrat organization

VIDEO: Cassidy Hides AFP Event From Campaign Schedule, Then (Literally) Thanks Secretly Funded Special Interest Group For "Mostly False" Attack Ads
PolitiFact Rated AFP Attack Ad "Mostly False" On Day Cassidy Hid Event From Campaign Schedule
New Orleans, Louisiana – On the day PolitiFact rated Americans for Prosperity's (AFP) latest misleading attack ad against Sen. Mary Landrieu "Mostly False," Bill Cassidy campaigned with AFP while hiding the group's involvement from his official campaign schedule, then (literally) thanked them for their false, secretly funded attack ads.
The Advocate reports:
"[A] Democratic tracker following Cassidy around looking for potential slipups — Republicans are “tracking” Landrieu, too — filmed the events seemingly intermingling and Cassidy chatting with Americans for Prosperity staffers.
"'Thank y’all for the ads you’re running," Cassidy told one of the Americans for Prosperity workers."
A tracker for the Louisiana Democratic Party caught Bill Cassidy entering the AFP event, mingling with AFP members for 30 minutes and literally thanking AFP for airing baseless and "mostly false" attack ads before being asked to leave by an unnamed AFP staffer who specifically described the event as an AFP event.
The NOLA Defender reports:
"The Democratic Party videographer continues to follow Cassidy as he works the room, but is later asked to leave by a different AFP repesentative.
"'This is not a public event?' the videographer asks.
"'Nope. Not a public event. In fact, on the door, it says, 'This area is closed,'" the AFP rep tells him."
Both Bill Cassidy and AFP seem to have gone to great lengths to hide each other's involvement in the same campaign event.
Cassidy advised the event as an address to the "Northshore Republican Men's Club and the Northshore Republican Professional Women." AFP advised it as a "Wasteful Spending and Obamacare Town Hall with former Congressman Jeff Landry," and made no mention ofCassidy's involvement in a post-event brief posted to their website.
WATCH: Cassidy Thanks AFP For "Mostly False" Attack Ads At AFP Event Hidden From His Official Campaign Schedule

"If there were any doubts Bill Cassidy was trying to hide behind a secretly funded special interest group airing false and misleading attack ads against Sen. Landrieu, these revelations should remove them entirely," said Campaign for Louisiana Communications Director Andrew Zucker. "Not only did Bill Cassidy participate in a campaign event with AFP on the day their attack ad was rated 'Mostly False' by a nonpartisan fact checker, but he also hid the group's involvement in his campaign from his official campaign schedule. Unfortunately this is further proof that he can't be trusted to come clean with voters or fight for Louisiana families."
###
Paid for by the Democratic State Central Committee of LA, www.lademo.org, and not authorized by any federal candidate or candidate’s committee.

Now, some words that Republicans want Mary Landrieu to choke upon:

“Lower and middle income people would receive subsidies to help them afford this insurance, while those individuals who like the coverage they already have will be able to keep their current plan. This is a very accurate description of this bill before us--the Patient Protection and Affordable Care Act.” - Sen. Mary Landrieu, Congressional Record, 12/22/09, p. S13733

Either you keep your promise, or you break your promise. That is the choice facing Mary Landrieu.

Seems like a no brainer, right? But it isn't that simple. Here's why:
• If Landrieu chooses to break her promise, she loses what little credibility she has left.
• There’s also Landrieu’s legislation to try to stop the bleeding but would have a devastating effect on ObamaCare, creating absolute chaos for millions of Americans, hundreds of thousands of Louisianans and the health insurance market.
It's a no win situation for Mary Landrieu – efforts to restore credibility will expose gross incompetence.

The liberal Talking Points Memo warned last week that legislation designed to allow people to keep their health care plans would "unwind Obamacare's guarantees of quality coverage and affordable prices, which were the basis of two important -- and popular -- market reforms under Obamacare: community rating (insurers cannot charge sick people more) and guaranteed issue (insurers cannot deny coverage to anyone)." Further, it would, "disrupt the premiums set by insurers because a chunk of their expected customers would no longer be enrolling in the marketplaces."

In other words, if such legislation became law, ObamaCare's exchanges would be destroyed because healthy people would get to keep their current health plan (and thus not enter the exchanges), meaning that those who enter the exchanges are likely to be sicker and more expensive for participating insurers. This means skyrocketing costs for everyone in year two. It would become so untenable that the law would have to be repealed amid public outcry and pressure.

Mary Landrieu is panicked and has no idea how to fix the disaster that she's helped to create. Further, it's plainly evident Landrieu is far more concerned with winning her next election than actually doing anything to really fix the problem. Washington has never looked more broken. It has never looked more incompetent. And it's about to get even worse as panicked politicians like Mary Landrieu look for the political fix to the practical problem that ObamaCare is fundamentally flawed. Who is to blame? Start with those responsible for this disaster like Mary Landrieu.

And last, as mentioned above, as the Tea Party candidate,  is beginning to gain some money and political traction, others are finding and pushing what they see as some inconsistencies in what Col. Maness has been feeding us.

Rob Maness, a former Air Force officer hoping to take on Sen. Mary Landrieu (D-LA) next year, has repeatedly blasted what he sees as unnecessary excess in the farm bill, legislation that provides subsidies to farmers and food stamps for low-income Americans.

When the House previously voted down a farm bill that contained some, but significantly reduced, funding for food stamps, Maness praised the defeat, calling the legislation a “Leviathan.” The farm bill has been held up in Congress after a Tea Party-led backlash in the House of Representatives led Republicans to remove the food stamp program from the farm bill and then insist in dramatic cuts.

“We owe it to our farmers to pass a bill that addresses their needs – not holds them hostage to welfare programs or puts outrageous debt on the backs of them and their children,” Maness said in a statement. He also argued that farm subsidies “are prone to corruption, waste, fraud and abuse” and should be phased out.

Yet, despite his opposition to farm subsidies, a ThinkProgress investigation has found that Maness has been all too willing to accept thousands in subsidies for his own farm.
Between 2007 and 2012, Maness took $4,958 in commodity subsidies for his farm in Madisonville, Louisiana, the 14th largest sum of any farmer in the town.

In an interview with the New Orleans Times-Picayune, Maness argued that “Without a true free market system, for most small, family farmers, a government subsidy is the difference between a profit and a loss, and being able to provide for your family and plant next year’s crop.” However, in his financial disclosure, Maness declared $18,909 in income from his farm in 2012 alone, more than triple the amount he received in subsidies.

Something tells me, it's going to be quite a long winter with quite a number of hearty, if not unhealthy food fights along the U.S. Senate election trail.

So, have a Happy Thanksgiving and watch your head.