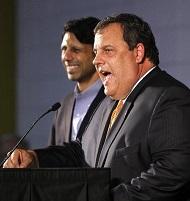 During the past month, a number of publications have profiled potential Republican candidates who could be major contenders for the 2016 presidential nomination.

In the past week alone, Time Magazine and The New York Times have profiled Christie, along with other major contenders, many who presently serve as governor.  The Times headline read: “As Washington Keeps Sinking, Governors Rise.” In both articles, Christie is portrayed as a hands-on governor who has an agenda to get things done, and stays in close contact with other officials in his home state.  Jindal was not mentioned in either article.

During the past several years, Jindal has crisscrossed the country speaking to Republican Party organizations on behalf of numerous Republican candidates.  This week, the Associated Press reported that Jindal has been out of state for more than two months in this year alone, for fundraisers, speeches and other campaigns.  That’s one day out of every five.  This travel does not sit well with his constituents back home.  Jindal’s approval ratings have dropped to the low thirties, lower than President Obama in the Bayou State.

Governor Christie was little more than a blip on the political radar screen three years ago, while Jindal was touted as the fair-haired boy of the GOP’s conservative future.  What caused one to skyrocket and the other to plummet?  How has one, considered to be the front-runner for the Republican presidential nomination soared while the other has been relegated to carrying on a fight to stay relevant on the national scene?

A number of political observers note that there is a stark difference in Christie’s and Jindal’s governing styles.  A Christie supporter in New Jersey told me that Christie is a consummate hands-on governor who is engaged at every level of New Jersey government with Republicans and Democrats alike.  “Nothing gets by this guy, and he is really plugged in to key issues that voters care about.”

The recent Time profile portrays Christie as a governor who …“has run the Garden State with combustible passion, blunt talk and the kind of bipartisan deal making that that no one seems to do anymore.  He’s a war horse with a temper and a tongue, the guy who loves his mother and gets things done.” Legislators say Christie is accessible, and they have no problem getting his ear, whether he finally agrees with them or not.

The word most used to describe Jindal’s governing style is “disengaged.” And that comes from friend and foe alike, even from members of Jindal’s own staff.  His key floor leaders in the legislature rarely speak to him.  In fact, the lieutenant governor and the state treasurer both have said that they have not talked to the governor in over a year and a half.  In his first two years in office, Jindal was much more available, regularly traveling the state for ribbon cuttings, church services, and speaking engagements.  Then national ambition set in, and Jindal’s availability was greatly curtailed.

The differences between Jindal policy and Christie policy are striking.  Christie readily accepted Medicaid expansion funds, saying: “It is the smart thing to do for fiscal and public health.”  Jindal said no to some $18 billion in federal funds that would cover some 400,000 Louisianans for years to come.  According to Jindal’s own Department of Health and Hospitals, this federal program would save the state, some $544 million.  And because of Jindal’s failure to accept these federal dollars, the Rand Corporation, a major non-profit research organization, says that every person who buys private insurance coverage, because of cost shifting, will see a jump in their premiums anywhere from 8 to 10 percent.

In other areas, Jindal has cut funds to higher education by $800 million, while Christie has increased college funding by $ 750 million.  In New Jersey, the governor appoints the insurance commissioner, and Governor Christie has made insurance reform a major priority.  When I was Louisiana Insurance Commissioner in the late 1990s, New Jersey had some of the most expensive insurance costs in the nation, including the country’s highest automobile rates.  At that time, Louisiana was in the middle of the pack nationwide.  Today, the roles have reversed as New Jersey rates have dropped considerably, while Louisiana leads the nation in high insurance costs.

Do both governors have an Achilles heel?  Maybe.  Jindal is short, and as stupid as it sounds, voters generally elect the taller of two presidential candidates.  And Christie? Well, lets just say it.  He’s fat.  He was on the cover of Time Magazine this week, and the headline was titled; “The Elephant in the Room.” Double entendre here? Christie will counter that he is “pleasantly plump,” that he recently had Lap-Band surgery, and that a lot of voters identify with his efforts to lose weight.

But the real key to Christie’s success is simply that he shows up and listens.  As Peggy Noonan wrote last week in the Wall Street Journal, “To show up, for Christie, is to show respect.” Christie says it this way: “You gotta show up regularly, consistently.  And you gotta listen.  You can’t always talk at people, you have to listen.  If you show up and let them know you care about them, they’re willing to give you a chance.  People want to be paid attention to.”

Chris Christie may not win the Republican nomination.  But right now, he’s leading all the other wannabes.  And he did not build his base by running from state to state, week in and week out, out giving speeches.  He did it by staying home in New Jersey, listening to his voters, working closely with the legislature, and being a problem solver.

This is a message that will play well in Louisiana.  Come on home Bobby Jindal!

It’s not that I’m so smart, it’s just that I stay with problems longer.