Scarlett O'Hara to Kate Middleton: Fiddle-dee-dee with the wind 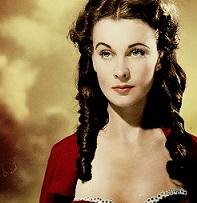 Waity Katie Middleton’s flipping and flapping her long, fat sausage curls while smirking and sighing on the balcony at the Cenotaph’s solemn Remembrance Day service made lots of people cringe.

Because it seemed like a flippant, self-indulgent careless gesture by a woman who may one day come to be a living symbol, with her husband, of the British nation.

The idea is making a lot of British people...cringe.

They can’t keep up with Prince William and Kate Middleton’s ever-increasing demands for multi-million dollar homes, resistance to doing any work, Kate’s odd pregnancy and seeming eating disorder, and their general vapidness.

But then, Kate Middleton appeared at the Citadel, flipped and flapped her curls, and started a huge internet furor over whether she should be tossed out along with her long, fat sausage curls, or at least corrected about her decorum, or lack of it.

The fuss reminded us of another feisty Waity Katie and her long, fat sausage curls:

Katie Scarlett O’Hara, in that saga movie, "Gone With the Wind."

They seem to have so much in common, these two Katies who waited a long time for true love to conquer all, despite the centuries that separate them. Long, fat sausage curls flipped and flapped under elaborate netted and feathered hats are the first thing that comes to mind. But then, one has only to review the "Gone With the Wind" dialogue to see how close in mind, if not in time, both Katies really are.

Look at Kate Middleton’s photos here, but think "Katie Scarlett O’Hara," and listen as these epic lines echo from the balconies of the antebellum South to the London Cenotaph’s balcony through time and space. First, as to honoring Great Britain’s war dead:

"Fiddle-dee-dee! War, war, war; this war talk’s spoiling all the fun at every party this spring. I get so bored I could scream!"

"If either of you boys says "war" just once again, I’ll go in the house and slam the door."

"Go on! I want you to go! I hope a cannonball lands slap on you! I hope your blown into a million pieces! I...."

Then, as to Kate Middleton being too rich and too thin:

"You can take it all back to the kitchen; I won’t eat a bite."

And as to Kate Middleton’s overt flirting last Sunday with Princess Anne’s second husband, Tim Laurence:

"He looks as if... as if he knows what I look like without my shimmy."
And perhaps here we can imagine Tim’s possible response, a la Rhett Butler:

"No, I don’t think I will kiss you, although you need kissing, badly. That’s what’s wrong with you. You should be kissed and often, and by someone who knows how."

And then, we can swing over to possible mother-daughter chats between Waity Katie and Carole Middleton:

"Why does a girl have to be so silly to catch a husband?"

"Well, if you think I’ll marry you just to pay for the bonnet, I won’t."

And don’t forget about what Kate Middleton may have to say about the public’s criticism that the Middletons are "cashing in" on Waity’s royal marriage and new royal connections:

And then, there’s always what Kate Middleton would tell the photo journalist who captured her flipping and flapping her curls about:
Ooh, if I just wasn’t a lady, WHAT wouldn’t I tell that varmint!"

If long fat sausage curls can suddenly erupt back into fashion, why not expressions like "Fiddle-dee-dee?"

Look out! The cringing is just beginning!

More in this category: « Obama, Louisiana, Congress, Gov’t : Something Must Give Louisiana Gov. Jindal, nungesser, Taffaro Praise With BP Oil Spill Progress »
back to top