Fumbling of the Healthcare Reform ball: Obama and who else? 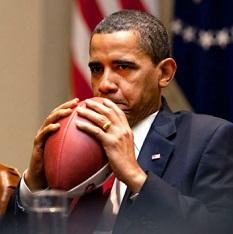 Who fumbled the healthcare reform ball?

With football jargon now being used to describe the failure of government, the issue becomes who dropped the pigskin and who's now going to pick it up and move down the field?

President Obama used the fumble metaphor on a number of occasions during his press conference Thursday in which he reversed fields on the insurance termination issues.

Yet, hardly anyone is pleased with the Affordable Care Act drafting, obsessions and the roll-out--which robably is a royal understatement.  Both political parties are blaming one another and solutions are hard to find.

Website does not work,  President Obama has had to apologize numerous occasions.  His reputation is possibly forever tarnished and now to possibly save face and save whatever hope exists that his major reform could still survive, he changed his mind on the healthcare insurance termination question. Yesterday he announced  his solution--Americans  can keep their existing policies—for one more year.

In part 2 of the Bayoubuzz discussion about these issues, attorneys Jim Brown, Lawrence Chehardy and Stephen Sabludowsky, in a Google Hangout, discussed what appears to be the political realities that caused the insurance and healthcare debacle—Washington DC is dysfunctional and that in many ways, Obamacare and healthcare reform has been grossly mishandled, by many.

How did the country get into the slop?

Chehardy said there was not enough input into the decisions and that both Republicans and Democrats shoulder the blame.

Brown said that the acts of governmental and political negligence is spread in the state houses such as the Louisiana legislature.  He said he is serious supporting the movement of getting rid of all those involved, even those who opposed the legislation but failed to ask the right questions.

Sabludowsky asked where do we go from here, and puts some blame upon the insurance industry for not stepping up to the plate years ago to provide consumer protections such as insurance regardless of pre-existing conditions and caps on patient’s medical costs.  Sabludowsky said the industry’s reluctance to provide these protections has created this compromise legislation.

Watch Part 2 of the Google Hangout in the video below:

Part I: Obama extends insurance policies: A Louisiana & US woes are us Hangout