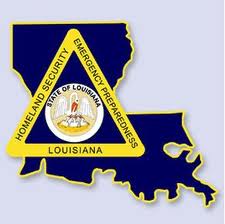 PIERRE PART, La. – Louisiana State Police on Wednesday escorted truckloads of equipment that will be used to construct the Texas Brine relief well near the sinkhole in Bayou Corne, as state agencies continue their support of response efforts to assist the community nearby.

LSP began providing an escort for 25 oversized loaded trucks that contained the pieces of the rig that will be assembled on Bayou Corne so that Texas Brine can explore its salt cavern. The equipment left Bosco, La. at 9 a.m. using five off duty troopers supplemented by on duty troopers for traffic control situations at major intersections along the escort route.  The company is using ten trucks for the 25 escorted loads and will return to Bosco throughout the day.

Also on Wednesday, the Governor’s Office of Homeland Security and Emergency Preparedness hosted a Unified Command Meeting of responding agencies and local officials to ensure that the response is coordinated. Using updates from the involved agencies, GOHSEP compiled an updated situational summary for the parish, which is posted on GOHSEP’s Website, gohsep.la.gov.

DEQ also continues to monitor the area near the sinkhole, conducting air monitoring near the bubbling in Bayou Corne regularly by boat, collecting air samples in the Bayou Corne community and deploying its Mobile Air Monitoring Lab for air quality monitoring and sampling in the area. To date, none of the samples showed any health threats related to air pollution.

In addition to DEQ’s analysis, the Department of Health and Hospitals has been analyzing environmental samples from DEQ. DHH’s environmental epidemiology staff has not detected a health threat.

The Department of Natural Resources continues to ensure that Texas Brine conducts its drilling well in accordance with its emergency order. DNR also reports that the Scientific Advisory Group analyzing information and scenarios relating to this incident.

As expected, the surface of the sinkhole that has formed in Bayou Corne has grown over the past few days as the land on the outer edge of the area is sloughing off into the sinkhole. This natural growth of the sinkhole was expected and could continue. Officials monitoring the sinkhole via regular flyovers reported the change in size on Wednesday, but noted that it is still much smaller than the maximum projected size to which scientists said it could grow.

State and local officials monitoring the situation will continue with regular overflights throughout the duration of the incident.