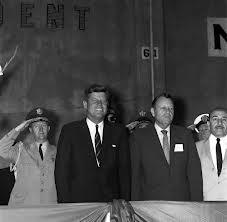 The 34th President of the United States was assassinated 50 years ago this week under controversial circumstances that leave a number of questions unanswered to this day.

Republicans look to Ronald Reagan as their ideal. But John Kennedy captured the hearts of the American people like no other president, before or since.  And from the first stirrings of his efforts to become president, to events that took place after his death, my home state of Louisiana has had a special place in the Kennedy legacy.

John Kennedy’s first foray in building Louisiana relationships began in 1956, during the then young Senator’s efforts to become the vice presidential candidate on the Adlai Stevenson ticket.  Stevenson had promised the VP spot to Tennessee Senator Estes Kefauver, but didn’t want to offend the Kennedy patriarch, Joseph Kennedy.  So he threw the nomination open to the convention floor.

As luck would have it, the Louisiana delegation sat right beside the Massachusetts delegates.  John Kennedy and his campaign manager and brother Bobby became fast convention friends with two senior Louisiana delegates, Judge Edmund Reggie of Crowley, and my mentor and friend, Camille Gravel from Alexandria.  But the Louisiana delegation was controlled by Governor Earl Long, and he was firmly committed to Kefauver for the vice presidential nomination.  Long left the convention early, having given strict instructions to Reggie and Gravel to support Kefauver.

Four years later, when John Kennedy set his sights on the presidency, he knew his Catholicism would be a problem.  There had never been a catholic president, and Kennedy wanted to build some initial political bridges in friendly territory. On October 16, 1959, he headed for Crowley, Louisiana, at the invitation of Judge Reggie and his wife Doris, to be the Grand Marshall of the International Rice Festival.  (A sad side note.  Judge Reggie passed away this week at the age of 87.)  One Hundred and thirty thousand people packed the streets to show their support and affection.  There are some marvelous photos taken at the Rice Festival of the future president, who never wore anything on his head in public, sporting a hat made from rice.

Following the Rice Festival, it was on to Baton Rouge, and then to the Roosevelt Hotel in New Orleans where Kennedy received similar accolades from the city’s large Catholic population.  There was no doubt that Louisiana was in Kennedy’s corner.  After he had become president, he reminisced that he felt his campaign had really taken off after his initial foray into the deepest of the deep southern states.

Under the Kennedy presidency, many Americans throughout the country felt a new wave of optimism, which they referred to as Camelot.  But then came Dallas. An unstable 24-year-old man with a $21 rifle changed the world.  Some historians have written that the Kennedy assassination caused America to loose its innocence.  And sadly, Louisiana ties to Kennedy’s death emerged.  Lee Harvey Oswald was born in New Orleans, and was active for years in the Crescent City as a pro-Castro Marxist.

New Orleans district Attorney Jim Garrison alleged a conspiracy involving a number of Louisianans, and even the CIA.  Garrison exposed contradictions in the Warren Commission Report, but his witnesses turned out to be unsavory characters and he was too small a player to take on an alleged international conspiracy.  And by the way, a key member of the Warren Commission was New Orleans Congressman and House Majority Leader Hale Boggs.  The Louisiana connections abound.

I knew “Big Jim” (he was 6’ 5”) well, and shared a locker right beside him at the New Orleans Athletic Club throughout the investigation and trial. He would often whisper that a new bombshell was about be revealed and he was certain that he would solve the case of the century. Jim, as it turned out, was both delusional and paranoid.  The case consumed him and he died a few years later at 70.

Fifty years later, President John F. Kennedy is remembered as one of Americana’s most inspiring and creative presidents. But his story would not be complete without an acknowledgement of the strong feelings of affection between this popular president and the people of the deepest of the deep southern states. Louisianans by the thousands were there for him on his path to the White House from the very beginning.  And, tragically, at the end, as well.

“It certainly was one of the most spectacular political tours I’ve seen… If I ever had any doubts that Kennedy should be the nominee, as far as Louisiana was concerned, any other candidate would be totally unsatisfactory by comparison.”