Bernie Pinsonat, of Southern Media and Opinion Research has just announced a November statewide poll which presents some interesting but challenging results.

Governor Jindal's favorables have risen to 42% from the recent SMOR poll of 38%.   Most of the increase has come from the Florida Parishes.

U.S. Senator, Mary Landrieu, who is runing for re-election has dropped ten points since the spring poll from 56% to 46%.  However, she still leads the pack for U.S. Senate.

in the Louisiana Governor's Race, Republicans lead overwhelmingly with Senator David Vitter on top of the pack with 30% followed by John Kennedy (19%), Jay Dardenne 18%.  Jon Bel Edwards, the only Democrat is at a lowly 8%.

Here is the press release from SMOR

Governor Jindal's job performance ratings continue to languish (42% positive to 55% negative) although there was a four point increase in his favorable ratings from the spring 2013 poll (38% positive to 60% negative). Jindal's slight rise in positive ratings is mainly due to him having an increase in positive ratings among the Florida/River parishes' area voters which includes Baton Rouge's capital region and among white, male Democrats and Independents. Governor Jindal remains popular among two-thirds of all Republicans.

Jindal's rise in job performance among Florida/River parishes' voters may be due to the "train wreck that didn't happen" on the highly publicized conversion of state-run charity hospitals. Rather than being the disaster some Baton Rouge area Democratic legislators predicted, the conversion ultimately led to some of those critics actually praising the outcome which in their views led to better health care for their constituents.

Last spring Governor Jindal's job performance ratings plunged to an all-time low of 38% because of severe budget cuts to the Charity Hospital System and similar cuts to health care services and higher education. Current state revenue projections point to a budget surplus rather than additional budget cuts in 2014. If Governor Jindal has enough dollars to begin reinvesting in health care and higher education, his job performance ratings could return to the fifties.

Her "excellent" ratings went up four percentage points (from 12% to 16%) which mainly came from black Democrats and female Independents. Her "good" ratings dropped by 14 points (from 44% to 30%). Her negative job ratings went up ten points with most of that being an increase in "poor" ratings (up seven points).

In spite of Governor Jindal's opposition, a majority of Louisiana voters say the levee board should continue with the many-billions-of-dollars, wetland damages lawsuit against 97 oil companies. Half (50%) are of the opinion the Southeast Louisiana Flood Protection Authority Levee Board should continue with that lawsuit; 36% say the levee board should drop the lawsuit; and the remaining 14% either don't know or won't say.

Although we can't be certain of what caused the shift, the controversial federal government's health care website fiasco which further drew attention to the Affordable Care Act likely contributed to Landrieu's lower positive job performance ratings. Contributing to Landrieu's declining popularity was the revelation that millions of health care insurance policies were canceled in spite of President Obama's personal guarantee that everyone could keep their individual insurance policies.

Senator Mary Landrieu is definitely facing an uphill battle for reelection. She draws 41% of the vote in a three-way trial heat with Republican challengers Congressman Bill Cassidy and Rob Maness who collectively draw 44% (34% Cassidy and 10% Maness) of the vote; the remaining 15% are undecided or wouldn't say.

If Senator Landrieu faced reelection in the next few months, her outlook for reelection would be highly unlikely. When voters were asked which was more important, keeping her in office

due to her seniority or electing someone new, 56% wanted someone new and 37% percent wanted to keep her in office. Her accumulated seniority is unimportant to most voters and reminding voters she is a three-term incumbent senator will not improve her outlook for reelection.

Not only are the voter registration proportions trending against Democratic candidates, but there is also the misalignment of party loyalty. About half (48%) of Louisiana voters tend to agree with Republicans no matter how they are registered to vote. Only 36% tend to agree with

This statewide poll was solely developed and conducted by Southern Media & Opinion Research, Inc., and funded by private subscribers.

Interviews for this statewide poll were completed by telephone with 600 Louisiana voters from Wednesday, November 6, through Tuesday, November 12, 2013.

The overall margin of error for the statewide statistics obtained from the survey data is not greater than plus or minus 4.0 percentage points at the 95% level of confidence. In other words, there is a 95% certainty that the statistics presented from the results obtained on this survey of 600 voters statewide will not be more than 4.0 percentage points above or below the figure that would be obtained if all of the voters in the state would have been interviewed.

A statistical weighting procedure was employed to normalize the sample to the voter population based on voter sex, race and political party affiliation.

$1·            Please tell me if you think the following elected officials are doing an excellent, good, not so good or poor job? 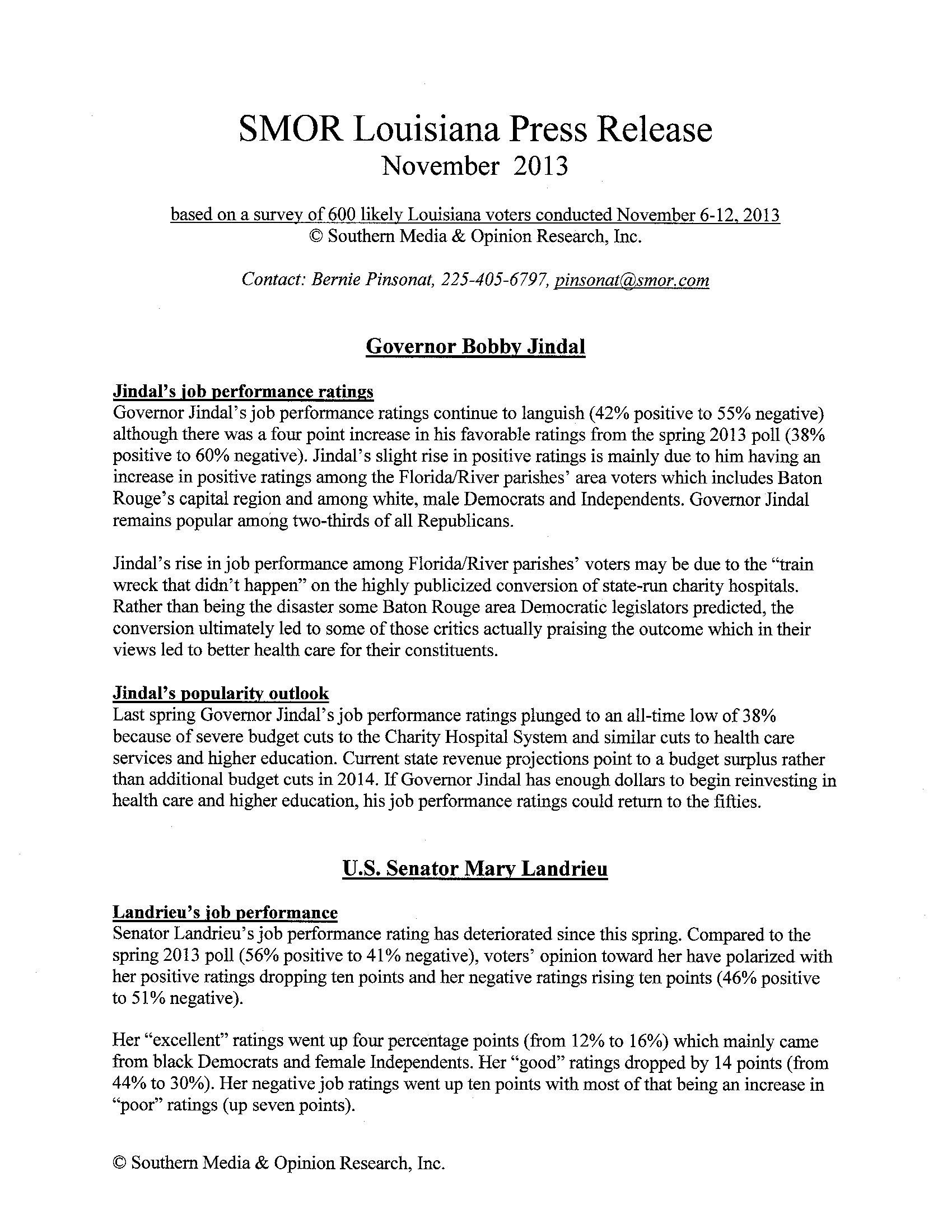 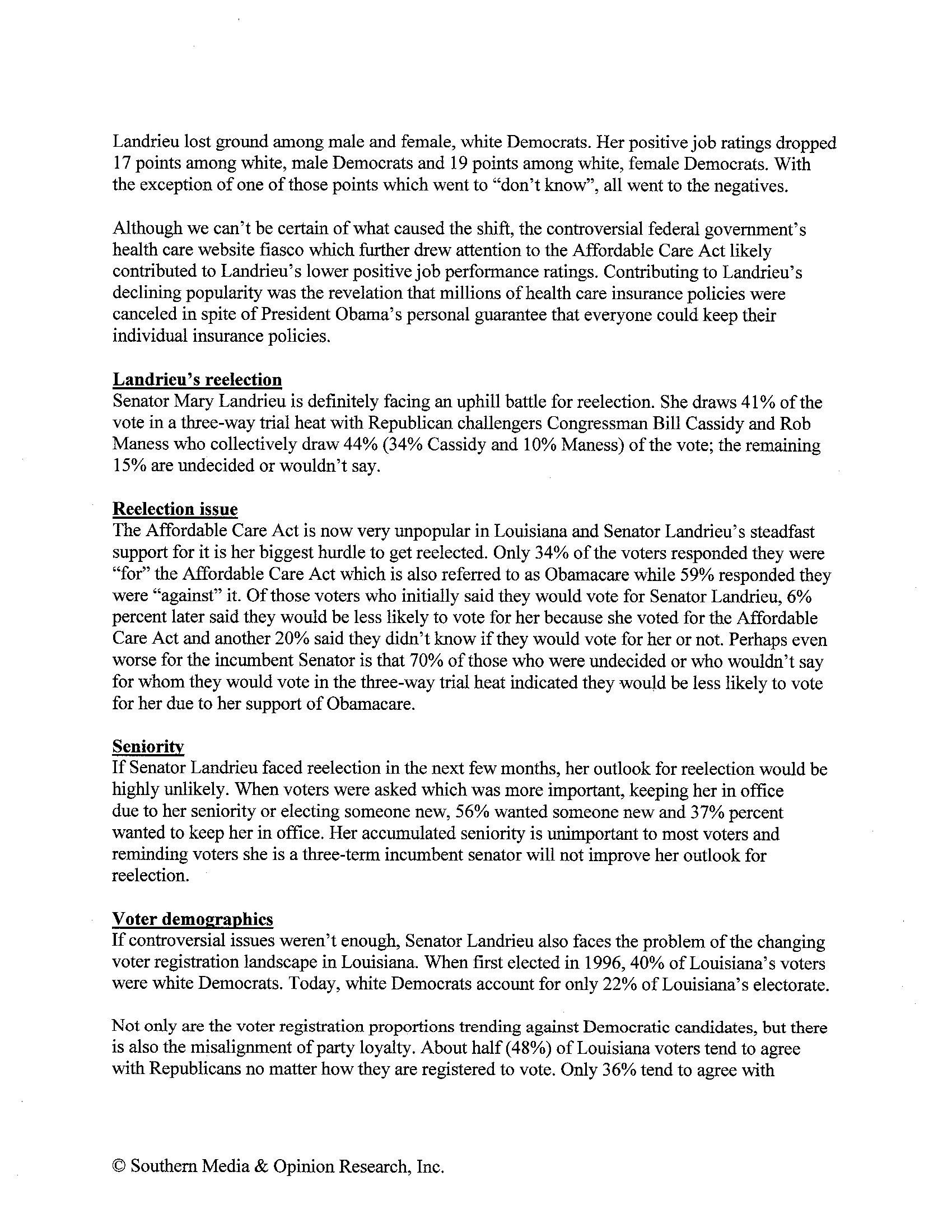 For more info to see the entire press release