Nuclear Option: Gridlock better than passing any of Obama's agenda 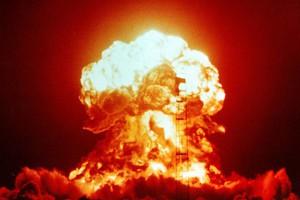 In the face of these disastrous results, it is interesting to note how the President responded. Instead of reaching out to the Republicans or moving to the middle, the President blamed Republicans for the problems with the Obamacare launch and huddled with hard core left wing broadcasters.

It seems that President Obama only cares about keeping the support of his rabid followers on the left instead of compromising and trying to work with his political opponents.  This week, he invited a select group of MSNBC hosts as well as other prominent liberal journalists to meet with him at the White House. The goal was to provide a “private off the record chat” for reporters who are supposed to push the President’s agenda among the public.  These liberal members of the media drink the Kool-Aid every day and enthusiastically push the President’s agenda. However, while he is preaching to the choir, the American people are growing tired of his lies and incompetence.

As Obamacare continues to self-destruct, the President will undoubtedly continue to face poor approval ratings among the American people. Republicans should use this opportunity to steadfastly oppose his agenda, such as immigration reform. If Obama refuses to negotiate, Republicans should follow the same strategy. Gridlock is better than passing any part of Obama’s agenda.

Unfortunately, House Speaker John Boehner (R-OH) promised that he would not torpedo the next major Obama goal, immigration reform, and claimed that the legislation is “absolutely not dead.” Sadly, Republicans like Boehner play political soft ball while Obama and the Democrats play political hard ball. Too many Republicans care about being liked by the media elite and their colleagues on the left. In contrast, Democrats care about winning and pushing through their liberal agenda.

For example, yesterday, Senate Democrats approved the “nuclear option” allowing judicial nominees to be approved by a simple majority instead of a 60 vote margin. This effectively kills the filibuster, which has been a Senate tradition for over 200 years. U.S. Senator David Vitter (R-LA) joined all of his GOP colleagues in opposing the measure. He called the vote “dictatorial.”

After jettisoning this important protection for members of the minority party, Senate Democrats will ram through left wing judges. In the George W. Bush administration, some Republicans had threatened to pass the “nuclear option” but decided against it after criticism from Senate Democrats and the media. This time, Senate Republicans were ignored by the Democrats and the mainstream news media has been largely silent.

These brass knuckle political tactics may work for Democrats on Capitol Hill, but not in the rest of the country. Otherwise President Obama would not have such low poll numbers. It is clear that outside of the Beltway, the country is growing tired of the President’s lies and empty promises.

The President made a commitment to the American people regarding their health insurance. He said people could keep their plan even after Obamacare was passed. Sadly, he lied and as a result, it looks dicey for the Democrats as the mid-term elections approach.

While the administration pushed back the implementation of the second year of Obamacare until after the mid-term elections to protect Democrats against the negative fallout from health insurance premium hikes, they cannot stop the wave of negative reaction to the overall impact of Obamacare.

The President told his liberal sycophants at the White House this week that he wanted to shift the narrative. To Americans facing rising insurance costs, a broken website, phony promises, problems keeping their doctor, and skyrocketing deductible expenses, it will be very hard to change the subject.