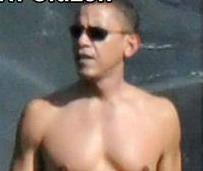 Yes, President Obama is getting ready to embark on the most expensive Christmas vacation in our nation's history. Instead of going to Camp David or their adopted hometown of Chicago, the Obamas are flying separately to Hawaii.

In fact, the First Lady has already left for the vacation, while the President finishes his "work" in D.C.

The total bill for dual airfare, a massive entourage, accommodations for staff and security will exceed $4 million.

While the President will pay the rent for his personal beach front estate, the rest of the costs will be covered by the American taxpayers.

According to the Hawaii Reporter, the airfare alone will cost $3,629,000, including 18 hours round trip on Air Force One, an additional cargo plane, plus travel costs for a Marine Corps entourage of six. With accommodations for the security team, plus the costs of massive local security in Hawaii, the Hawaii Reporter estimates the costs will total $4,113.038.

In a horrible economy, with millions of Americans cutting back on Christmas spending and travel, it is rather unseemly to say the least for the President to enjoy the most expensive vacation of his term in office. He is sending the wrong message and setting the wrong example for struggling Americans.

Mr. President, you are no man of the people and you are completely disconnected from reality.

In last week's interview on "60 Minutes," President Obama boasted that he was the fourth best President in U.S. history.

Clearly, our current Commander in Chief has delusions of grandeur. He told reporter Steve Kroft, that "I would put our legislative and foreign policy accomplishments in our first two years against any President, with the possible exceptions of Johnson, F.D.R. and Lincoln, just in terms of what we've gotten done in modern history."

While he can maybe make a case that he is the fourth worst President, and not the absolute worst, to claim that he is superior to George Washington, Thomas Jefferson and James Madison, Theodore Roosevelt and Ronald Reagan is outright delusional.

What are his major accomplishments? If you consider growing the debt to $15 trillion, quadrupling the budget deficit, massively extending the federal government's role in health care, and apologizing for our country throughout the world as accomplishments, then President Obama has plenty. If the criterion is growing the economy, creating more jobs, dealing with our debt situation or improving the national security of our nation, then Mr. Obama has been an abysmal failure.

For a man with such a scant record of "success" to claim he is the fourth best President in the 235 year history of this nation, clearly proves that President Obama is on a permanent vacation, a vacation from reality.

Jeff Crouere is a native of New Orleans, LA and he is the host of a Louisiana based program, “Ringside Politics,” which airs at 7:30 p.m. Fri. and 10:00 p.m. Sun. on WLAE-TV 32, a PBS station, and 7 till 11 a.m.weekdays on WGSO 990 AM in New Orleans and the Northshore. For more information, visit his web site atwww.ringsidepolitics.com. E-mail him at [email protected]

More in this category: « SMOR Poll: Jindal a bummer, Landrieu a goner? Legislation could give facelift to Louisiana social-media privacies »
back to top