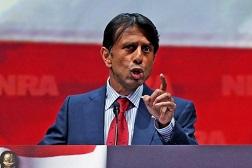 While Louisiana Governor Bobby Jindal has forever been penning opinion pieces nationally as to how the Obamacare engine will wreck even if the website gets a fix, and while he continues to claim it is stupid to discuss the 2016 elections, others, who make their own living at this type of thing, have their own opinions.

One,  best-guess, comes from the New Republic, which column claims that Scott Walker the Wisconsin governor, not Chris Christie the New Jersey  head of state, could be that unifier.

What might be of interest, however, is the author, Nate Cohn’s comments regarding our own “favorite son”, Governor Jindal and that of another southern state, Florida.

In particular, Cohn writes, “Luckily for the GOP’s factional stars, it’s tough to be a mainline Republican. The broadly appealing conservatives, like Bobby Jindal or Marco Rubio, earn their broad appeal at the expense of anyone’s passion: They’re no one’s first choice, and they start without an electoral base. To win, they would need to stand out—in debates or on the stump, or in the so-called “invisible primary,” where a candidate can rally the party establishment and build the campaign apparatus and media attention necessary to elevate themselves in the minds of voters. But the party’s establishment is also factionalized—no candidate succeeded in uniting it in either 2008 or 2012, even though Romney was a clear establishment favorite.

Early this year, it seemed like Rubio had a real chance to pull it off. The young, charismatic senator from Florida was an establishment savior, the physical manifestation of their political vision for winning national elections by appealing to Hispanics and young voters. He’d do so, they envisioned, without compromising on the party’s core religious and business policies—just immigration reform and Tea Party rhetoric. But immigration reform crashed and Rubio seemed unprepared to compete at the highest levels. His numbers have declined; he’ll struggle to regain the trust of the establishment.

So far, Rubio and Jindal look like they’re auditioning for the role of 2016’s Tim Pawlenty—a candidate the mainline establishment wished could take off, but someone who didn’t have the chops to win either Iowa or New Hampshire, states where the Tea Party and moderates are at an advantage. Perhaps the most obvious alternative to Rubio is Jeb Bush. But it’s unclear whether the “compassionate conservative” message still plays with Republican primary voters, let alone whether Bush will run.

The author makes an interesting point.

Governor Bobby Jindal just might not be conservative enough nationally to win the Tea Party-strong caucuses in Iowa and New Hampshire, South Carolina and Florida.

Without a built-in megaphone courtesy of the National Republican Governor’s Association, of which he headed this past year, he, as in every other potential candidate must make noise—as a talking head, as a columnist or as a national spokesperson of some type.

Jindal has done just that since he lashed out against the Mitt Romney campaign post-election 2012 and as he began to don the GOP as the “stupid party”.

Recently, he has hit the Internet with ads in online national publications that pit him against President Barack Obama in a fight for parochial Louisiana education.  Jindal’s ads claim that Louisiana parents know better than the Obama administration.   These ads might be great for Louisiana readers, but, other than raising money for his own campaign, one might doubt they will generate many click-troughs.    Yet, as Obamacare continues to play out as a story with very long legs, Jindal will surely have plenty of fodder to be the anti-Obama.

Then, again, so will Rubio, Walker and just about every other mentioned-republican candidate for President.

So, the question might be asked, how will Jindal make himself the difference-maker in a deep-red chorus singing to the choir, that anything and everything Obama is bad for America?

More particularly, for Jindal, how can he grab the conservative and Tea Party-type caucus and primary activists after suggesting that the conservative domestic  policies of some candidates and elected officials have been chipping away at the party’s image?

Keep in mind, recently, the Louisiana conservatives have not been too impressed with the Governor.

A group of Louisiana-republicans named the “fiscal hawks” slammed Jindal throughout the budget process last legislative session until they were bested by the Jindal- controlled GOP executive staff.

Talk radio and the conservative Louisiana blogdom have been quite anti-Jindal and, for the most part, have been the most vocal against anything Team Jindal.

In the most recent SMOR poll, Jindal’s favorable improved by four percent from a lowly 38% to  42%, although other polls earlier this year still have him deep in the mid-twenties. The SMOR poll press release said,

“Last spring Governor Jindal's job performance ratings plunged to an all-time low of 38% because of severe budget cuts to the Charity Hospital System and similar cuts to health care services and higher education. Current state revenue projections point to a budget surplus rather than additional budget cuts in 2014. If Governor Jindal has enough dollars to begin reinvesting in health care and higher education, his job performance ratings could return to the fifties.”

Should SMOR’s comments come to pass, Jindal might be able to show some respectability in the polls, although, his staff has said he doesn’t care about polls, at all, anyway.

Should SMOR be accurate in assessing Jindal’s poll future,  therein lies an even more fetching quandary.  Would spending more government money to offset prior “severe budget cuts” to Charity Hospital System and to healthcare services and higher education be Jindal’s salvation?  Would these investments in governmental services fly high with the already-frustrated fiscal hawks?

If Governor Jindal cannot convince the Louisiana fiscal hawks that he is their man, how would he convince those in Iowa or New Hampshire especially those who might take particular issue with being labeled a member of the “stupid party”--apparently for their staunch, bedrock-conservative views?

As Governor Bobby Jindal begins the third-year of term-limited “lame duckhood”, he once again must decide what he wants to do when he grows up.

Jindal has just launched his own conservative think-group to help tackle the “big ideas”, that, if put into practice, could make the GOP the dominant voice in the country.

Whether Jindal begins to excite the conservatives of primary and caucus-land or whether he simply goes the Pawlenty-route of advocacy as he approaches the young, ripe age of mid-forties, my crystal ball has no answer.

However, here’s an idea.  Due to his penchat for writing columns  and getting published in those  national political magazines and newspapers,  just maybe his future would lie a Bill Kristol-type political pundit on Fox News.

Then, he could call his fellow political brethren,  “stupid” until the cows or the GOP pachyderms come  home and make wild-guesses along with the rest of us tea-leaf readers.