Get Your Gingrich That Stole Christmas Toilets 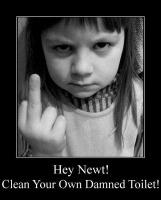 christmas has come early for democrats since newt gingrich has stepped up to be the teabag flavor of the month for the gop as the overblown iowa caucus nears.

while some polls are now asserting that newt’s candidacy is already plummeting nationally almost as quickly as it rose from the ashes of the herman cain teabag fiasco, the teabag nation of stagnation released a poll of their own membership yesterday showing that nearly one third of them still love newt best.  his 31% showing beats out teabag pinup girl michelle “pray the gay away” bachmann, who garnered 28%.

more than a reflection on newt, however, this one-two newt/michelle teabag punch really highlights the delusional and self-destructive nature of the teabag rank and foul. they have become so hypocritical, inbred and insular in their negative tendencies that they can’t see that their very support for a candidate is now that candidate’s kiss of death.

the teabag mantra is allegedly all about electing anti-establishment outsiders, yet in their desperation they now group-hug the most self-serving, morally and politically bankrupt washington insider in the gop field of bad dreams.

newt, the serial adulterer who was having an affair as he hounded wife #1 for a divorce while she battled cancer, then was later forced by the courts to quit being a deadbeat dad and pay his bills.

newt, who then married wife #2, with whom he cheated on his first wife, only to cheat on his second wife with the woman who would become wife #3!

yup, those are teabag/evangelical self-serving family values alright, if you’re talking about the manson family, maybe. when evangelicals embrace newt, they better wear a condom.

did i mention that newt’s own sister is campaigning against him?

but hey, pastor teabag protests, newt’s hypocritical personal life isn’t the question, it’s his righteous battle against government abuse by washington fatcats that we love about him!

that’s what i love about him too: newt, the former speaker of the house driven from his seat in disgrace when 84 ethics charges were filed against him by his fellow house members, sanctioned by a 395-28 vote and fined $300,000 for being a general source of corruption and embarrassment.

just to remind those would-be newt apologists, those charges included kiting 22 bad checks including one to the i.r.s.; setting up a charity, supposedly for inner city children, to use as a political front and money recycling center; intentionally falsifying information he gave to investigators; lying to his fellow congress members; using taxpayer subsidies for his personal and professional wellbeing….and these are just some of the things to which he confessed….do i really have to go on? ok then, one more thing…

in a unique blend of perverse family values and political depravity, his big selling point on the campaign trail in recent weeks has been to gut child labor laws and have schoolkids go to work cleaning toilets. you heard me. you read it right. newt gingrich, ladies and gentlemen, family values man and job creator!

so by constantly embracing the morally bankrupt and just plain goofy, the tea party really succeeds in exposing those same twisted moral and political flaws within itself. as long as they continue their irresistible march to certain destruction of any gop chance to take the white house in 2012, democrats will continue to celebrate the holiday season, warm with the knowledge that while they feast on holiday turkey, teabag nation will continue to cannibalize the turkeys they keep presenting as serious options for the white house.

and while i celebrate the season with my family this week and next, i can only wonder what the tea party faithful will be chewing on as they dig into what’s left of their holiday presidential left-overs.

A MUST WATCH VIDEO, TAKE A LOOK..

Would Gingrich be a Good President? Talk about this below?