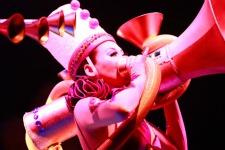 Just like the headline says: Awesome! TOTALLY awesome!! The cast of the Cirque Dreams Holidaze show, now onstage at the Mahalia Jackson Theater, puts on an eye-popping display of acrobatics, gymnastics, choreography and all-out pizzazz that simply has to be seen to be believed.

And, even then, you can’t be sure you’re really seeing what you’re seeing.

In town for only five shows, Cirque Dreams Holidaze will be performing at 8:00 p.m. Wednesday, Thursday and Friday and at 2:00 p.m. on Saturday. Tickets can be ordered through Ticketmaster or directly from the theater box office. The show was brought to New Orleans under the auspices of Broadway Across America.

An international cast of roughly 30 performers from nine countries and four continents, Cirque Dreams is making its second appearance in New Orleans in the past year. Some of the routines seen in Holidaze were similar to ones that were staged in their previous local outing but, no matter how many times you might see these acts performed, you are as amazed and incredulous the second time as you were the first time. There is just simply no way ordinary human beings could perform feats like these but, then again, these are not ordinary human beings.

Muscles stretched and rigidified to the max hold another hundred-plus pound human being suspended in the air at an arm’s length. Fragile porcelain chinaware pots are tossed in the air and caught behind backs or balanced on heads. Skillful feet miraculously keep their balance on a narrow board teetering on several layers of rollers. Other skillful feet literally flip and juggle another human body multiple times without so much as breaking a sweat. Bicycle riders effortlessly transfer from one moving bike to another and do handstands in tandem without breaking stride. Bodies swing through the air and spin like tops at dizzying speed. And all the while, in the background, Christmas ornaments, candy canes and other symbols of the holidays prance across the stage in a colorful panoply that would rival City Park’s Christmas in the Oaks.

Just watching some of these acts can make you dizzy. As the first act ended, I was literally stumbling out the door into the lobby until my senses and equilibrium returned to normal.

Simply put, this is a show definitely worth seeing and experiencing. It’s like watching magic unfold before your disbelieving eyes but, unlike most contemporary magic acts, there’s no smoke and mirrors here. No gimmicks. Just human strength, balance, skill, equilibrium and showmanship. It’s all there and more. Don’t miss it!

For tickets and information go to www.Ticketmaster.com or the theater box office at 800-218-7469.

More in this category: « Kate Middleton, Prince William security guy: Bored more to Broadmoor Spendthrifts Obama, Biden play while rest of US sequesters »
back to top