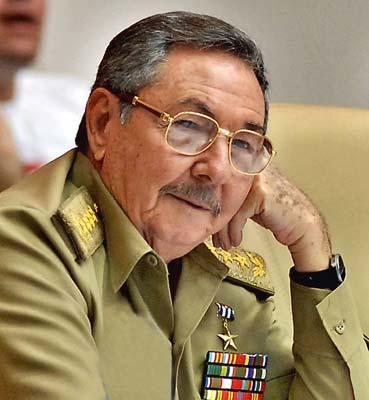 Today, at the funeral of former South African President Nelson Mandela, Barack Obama greeted a number of world leaders, including the communist dictator of Cuba, Raul Castro. The President warmly shook hands with Castro, slightly bowing during the visit to engage in pleasantries.

Instead of greeting Castro with an outstretched hand, Obama should have scolded Castro and demanded that the dictator end his support for terrorism abroad and repression at home.

Cuba today is trapped in a time warp, forever stuck in 1959, the year of the communist revolution. Cubans still drive antique cars, live in antiquated conditions and deal with immense poverty.

Communism is the antithesis of freedom, so Cubans are not allowed to exercise God given rights of speech, press, assembly, petition or religious expression. While there have been some modest reforms, the overall condition of the average Cuban is still very poor today.

Raul Castro and his brother, Fidel, have ruled Cuba with an iron fist since the communist revolution over five decades ago. To instill fear among Cubans, dissidents have been executed at home, others have been sent to slave camps, while terrorists abroad have been supported.

It is no surprise that the socialist country of Venezuela is closely tied to the Castro government. Cuba also enjoys good relations with the Islamic Republic of Iran, a virulent enemy of the United States of America.

Obama’s handshake is only the second time in over 50 years that an American President has greeted a Cuban leader. Surely, Cuban Americans unable to return to their homeland will be angry at Obama’s embrace of Castro. In contrast, the liberal media is enthusiastic about the greeting, saying it is a unifying moment in the aftermath of Mandela’s death. John King of CNN was very supportive, claiming that the handshake was “the president was showing respect for the moment.”

Currently, there is a longstanding U.S. embargo against Cuba, and we have no diplomatic relations with the terror supporting country.  Nevertheless, the President has eased travel restrictions to Cuba and opened up more cultural, educational and religious ties.

Despite the concessions, Cuba has not abandoned their support of anti-American regimes and terrorist organizations. According to U.S. Senator Marco Rubio (R-FL), the son of Cuban immigrants, “the Castro regime sponsors terrorism abroad and against their own people.” He believes that the country continues to “have close ties to terrorist organizations.”

The leader of a terrorist state does not deserve a presidential greeting; he should be facing a trial before the International Criminal Court for crimes against humanity.

Our country should not be moving to lift sanctions against Cuba. Instead, we should be working to support dissidents who want to bring about the end of repression in the country.

The United States should stand for human rights and freedom and oppose communist dictatorships, like the Castro regime in Cuba. When President Obama greeted Castro on worldwide television, it sent a message to people across the globe. Sadly, it was the wrong message.