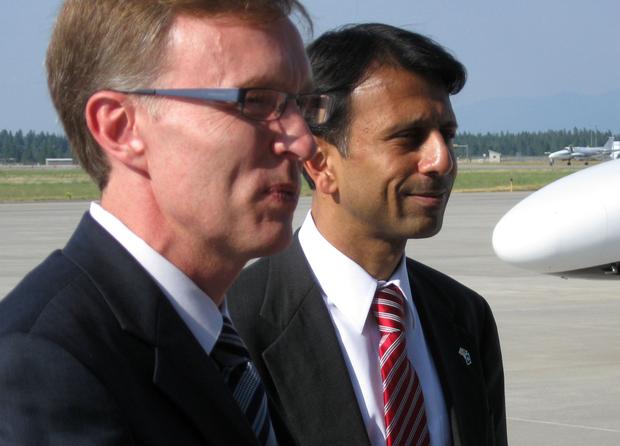 It has been a busy week or so for Governor Bobby Jindal.
Despite traveling across the country in recent months hoping to win the vice president nod from Mitt Romney, the realities of governing Louisiana has hit home, hard this week.

Not only must the Governor now deal with an education reform plan under great criticism across the state and nation, but the Louisiana’s healthcare woes have become more severe as a result of large government cutbacks.

Also, in the past days, Jindal has had emergencies of other types—all in south Louisiana:

Deputies killings
Two sheriff's deputies died and two were wounded in a series of apparently linked shootings early Thursday in LaPlace. The first shooting happened in a parking lot at a steel plant in LaPlace, about 25 miles west of New Orleans, St. John the Baptist Parish Sheriff Mike Tregre said. The second happened when the deputies went to a nearby trailer park to investigate the first shooting and were ambushed by a man armed with appears to be an assault rifle.
Louisiana State Police Col. Mike Edmonson said multiple weapons were involved and at least 20 shots were fired.

According to AP, “As experts predicted, a sinkhole filled with slurry water and vegetation has been slowing expanding.

Assumption Parish Police Jury spokeswoman Kim Torres says the sinkhole near Bayou Corne grew by 50 feet Thursday morning as the surrounding environment sloughs into it. Two cleanup workers in a boat near the site almost fell in and had to be rescued by airboat.

Their boat, which was tied to a tree, was eventually swallowed by the muck.

There were no injuries reported and cleanup operations have been suspended.

Before that, state regulators are preparing for a worst case scenario involving a nearby underground storage site for large quantities of highly explosive butane, which could be compromised by the sinkhole, creating a massive explosion.

According to one environmental attorney Stuart Smith, the state should look out for the worse. In a press release, Smith states, “How massive? The best of the worst-case scenarios comes from company and state officials, who’ve consistently underestimated the potential for damage from the failed brine cavern so far; they insist that the explosion might rattle some nearby windows. But others think an explosion involving so much highly combustible butane could be more like an atom bomb. The truth is out there.”

As an update, Kevin Davis, the director of the Governor’s Office of Homeland Security and Emergency Preparedness, regarding this announcement late Thursday afternoon:

“We are glad that almost a week after committing to making a significant contribution to assist those who have to evacuate, Texas Brine is finally going to begin offering help to the families who live near the sinkhole, which is a requirement of the permit they were issued for the salt cavern that is believed to be causing the sinkhole. We hope that this assistance is enough to help the families who are being impacted by this event and the subsequent evacuation order by Assumption Parish and that, if the base aid being offered is not enough, Texas Brine will work to meet individual families’ needs.”

The area has been under a state of emergency since early August.

Governor Bobby Jindal also declared a State of Emergency in response to Plaquemines Parish on Wednesday, allowing for state agencies to offer assistance to the Gulf coast parish as it deals with issues relating to its water supply.
In Louisiana, near historic low water levels of the Mississippi River are creating conditions conducive to allowing saltwater from the Gulf of Mexico to migrate up the Mississippi River or saltwater intrusions.

Plaquemines parish has been responding to a salt water wedge moving up the Mississippi River.

These incidents would make any governor want to head out of Dodge, and travel.