Nick Lord's Kate Middleton portrait belly up to the tease 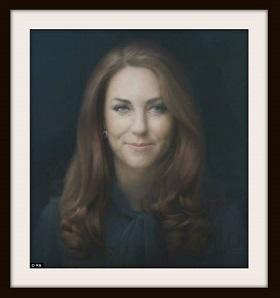 Nick Lord is the British artist who just won the Sky Arts Portrait Artist of the Year competition.

As part of his prize, his recent portrait of Iraq War veteran Lance Corporal Johnson Beharry will hang in London’s National Portrait Gallery for the next week. Beharry, who was recently decorated with the Victoria Cross in 2005 for extraordinary bravery rescuing fellow soldiers from two ambushes, is portrayed by Lord in full dress uniform (minus hat), sitting before sunlit windows, his hands folded into his lap and looking deep in luminous thought.

And indeed, it is.

But what of Lord’s other, much less discussed but far more controversial work?

What of Lord’s portrait of Kate Middleton, ostensibly pregnant with a Santa Claus belly that looks not like a bowl full of jelly, but like a fake department store Santa Claus?

Yes. Nick Lord painted Kate Middleton– probably not from a live posing (although nobody is saying anything)– semi-naked and with a big, round, hard-looking belly.

But what exactly has the artist captured with his careful eye?

Kate is posed as we often see her in real life. Her swirling mass of brown hair is pushed full forward and over her shoulders in a cascade of over-rolled sausage curls so that it covers her uppermost torso like a hairy shawl. Because this overflowing completely hides Kate’s neck from view, Kate presents an odd, neckless figure in photos, as though her head were disembodied from the rest of her.

Below the hairy hair blanket, and in a probably nod to Prince William’s love of the African savannah and wildlife preservation and the like, Lord has painted Kate’s breasts ensconced in a leopard-print brassiere.

Kate’s lower lady parts, of which she was so fond of flashing to us while getting in and out of limousines and taxis, is ensconced in a semi-sheer, shimmery kind of pajama bottom, or perhaps it is harem pants.

One of Kate’s arms is behind her head and great mass of gangly hair, and the other is where both of Kate’s hands most often were during her presumed pregnancy–tucked up under the bottom-most part of her alleged bump.

Lord has painted Kate’s eyes as we have come to know them–hidden behind layers and layers of blackest mascara and tattooing.

She looks not like a princess of the United Kingdom, as it states on Prince George’s birth certificate under "mother’s" occupation. Rather, Kate looks like...Salome.

And it’s not just because of the filmy pajama bottoms.

Biblical stories tell us that Salome danced the dance of seven veils for her paternal uncle and stepfather, Herod Antipas, who had married Salome’s mother, Herodias. Herodias had previously been Herod’s brother’s wife, and Salome was a product of that first union. Salome’s dance of the seven veils was done supposedly to incestuously seduce her uncle and thereby entrap him into executing by decapitation John the Baptist, who had the nerve to go criticizing Mama Herodias for making what John supposedly declared was a too-close-kin marriage.

One wonders whether Herodias and Carole Middleton look at all alike....

Salome is usually portrayed as having a tangled, serpentine-like mane of dark brown or black hair, wearing a brassiere and filmy pajama bottoms or harem pants. She has an out-of-breath look about her in most paintings, as though she has just stopped swirling and twirling and shimmying throughout whatever passed for a burlesque kind of strip tease back in the first century A.D.. Or probably it was a belly dance.

For which women need bellies!

And lady belly dancers’ bellies are soft, seductive, full of the promise of fertility present, future, and past.

But artist Nick Lord has painted Kate Middleton’s pregnant belly as being hard as a rock, and round like an inflated beach ball.

Or maybe it is a prosthesis.

Lord has dulled the edges around Kate’s belly, and the rest of her is similarly hard and sinewy-looking. Her arms are sticks from too much dieting. There is no sign of the gentle, subtle double chin fully pregnant women often acquire.

Birth truthers will claim that Lord has painted a portrait of Kate coddling her rubber fake pregnancy prosthesis.

Only the artist knows what he’s done.

Artists paint what they see, but much of their process is subconscious, and an artist sees with his mind’s eye.

An artist may not only know what he’s truly painted long after the work is finished.

There are a few other clues as to what might be going on in Lord’s mind. The background of his portrait of a pregnant Kate is a wide and high vividly scarlet Victorian sofa-back. It looks big enough to be a royal bed headboard. But it’s clearly a couch. The bright red color mimics the omnipresent red of Buckingham Palace, which symbolizes the Royal Family. It is the color of Prince William’s bright red wedding military uniform.

It looks plastic and unreal.

It looks completely out of place with her otherwise skinny, bony body.

Kate’s right hand seems to be dedicated to holding up this abdominal extension, not caressing any growing life inside it.

The big red royal sofa backdrop could symbolize the couch upon which the seduction of Prince William took place, or it could just as easily represent an imitation couch so often found at an upscale hairdresser’s salon.

Two dimensions appear before Nick Lord’s viewer– one royal and serene, one cheap and ordinary but in an expensive, high-maintenance way: The world of the royals that is now subbing in for the world of the Middleton family.

Kate’s eyes in Lord’s portrait are open and even staring, perhaps at the man who is staring back at her almost-naked body. Even the gossamer pants painted by the artist show a darkened shadow where the anatomically correct parts are usually found, beneath Kate’s hand.

It is a very controversial portrait that likely will never be shown in the National Portrait Gallery. Like some paintings of Salome, Kate is smiling sexually and seductively. Her smile and wild hair mass are reminiscent of the smug Salome of French artist Henri Regnault, where a golden-clad Salome sits, presumably before her dance, with a gleaming golden platter resting in her lap, complete with an ivory-handled scimitar but without John the Baptist’s head. Regnault’s painting has the languid air of a mission accomplished. Or is it the sly, yet outlandishly evil, air of a young woman who is practiced at getting her way? Are the scimitar and basin clean because they have not yet been used?

Regnault’s Salome exudes the easy, steady confidence of a practiced girl who looks like a gypsy, but is clearly something more. She hides her eyes with her curly bangs, and yet even within these dark recesses, Regnault’s Salome’s eyes reach out to us, speak to us in chilling whispers, and draw us into her world. Looking at this Regnault’s Salome is also fleshy, buxom, youthful, and desirable. She is wearing far more clothes that Nick Lord’s Kate Middleton, but Regnault’s Salome is far more sensuous and sexual. Instead of showing Salome in something as tacky and demeaning as a pointy leopard brassiere, a whole leopard’s skin (spread out atop an oriental rug) lies beneath Regnault’s Salome’s naked feet.

This is the whole of Africa in submission to the sensuality of the eastern world closest to it.

Regnault’s painting portrays Salome as someone far more interesting. Regnault’s portrait shows that Salome’s feet alone, plump and pink and naked except for her toes, which burrow into the fronts of her delicate slippers almost concealed beneath the leopard hide, are made for the act of sex. Salome’s right hand rests delicately but firmly upon the decapitation sword in the bowl, and her left hands rests lightly on the oriental box she sits upon, although it also lies just along her hip, making only the merest allusion to the lower lady parts that Kate Middleton all but shrieks about into our faces.

Salome’s eyes, hiding beneath a jungle of dark fringe, gleam out at us with the promise of evil deeds and thoughts. Her hand on the scimitar makes us wonder, whose head will next be severed to rest in there?

Nick Lord’s Kate Middleton with fake belly just makes us wonder when the next royal strip tease act is coming up.

And Lord’s is art as well.