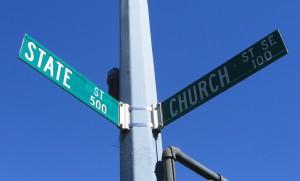 It has been a disturbing week for American Christians. At Shaw Air Force Base in Sumter, South Carolina, a nativity scene was removed after complaints from the Military Religious Freedom Foundation.

After the Pentagon became aware of the situation, it acted with amazing speed, removing the plastic images of Baby Jesus, Mary and Joseph in just over two hours.

It is clear that the Military Religious Freedom Foundation is quite influential with the Obama administration. It’s doubtful that a Christian organization would have enjoyed such access with the Pentagon.

With the country safe from the nativity scene, the Ninth Circuit Court of Appeals was free to focus its attention on a memorial cross atop Mount Soledad in California.

The cross has been on display since 1954, but it has been the target of numerous lawsuits over the years. Starting in 1989, the ACLU has argued in court that the cross is a violation of the First Amendment’s Establishment Clause.

After 24 years of legal challenges, the ACLU struck gold this week. In the ruling, the court decided that the cross must be removed as it is erected on federal land and is unconstitutional.

The court said that the cross violates the separation of church and state and must be demolished in 90 days.

Supporters of the case hope it will be taken by the U.S. Supreme Court, but that is uncertain at this point.

The cross honors those veterans who have made the ultimate sacrifice while serving their nation. According to Joe Kasper, aide to U.S. Congressman Duncan Hunter (R-CA), the cross is “an unforgettable symbol of appreciation to generations of sacrifice."

The ACLU and Jewish war veterans have complained that the cross is “an unconstitutional endorsement of religion.”

The cross is a 43-foot monument that is not exclusively a religious symbol, as it honors our military veterans, the heroes that have fought and died for our country in every conflict from the Revolutionary War to the wars in Iraq and Afghanistan. For over 50 years it has been a fixture in the San Diego skyline.

Unless the Department of Justice intervenes and decides to appeal the ruling, Americans will witness the disturbing spectacle of this memorial cross being removed.

In the span of one week, a nativity scene and a memorial cross have come under attack. In our politically correct country, more and more traditional symbols of faith are being targeted.

It is a sad testament about how this country has changed and moved away from the Judeo-Christian roots of our Founding Fathers.