House Speaker Chuck Kleckley announced that he has appointed Rep. Austin Badon (D-New Orleans), to serve as Chair of the House Municipal, Parochial and Cultural Affairs Committee. Speaker Kleckley has also appointed Rep. Terry Landry (D-New Iberia) to serve as vice chair of the House Transportation, Highways, and Public Works Committee.
In announcing the change, Kleckley said, "I am confident that Austin will be a good fit as chair of Municipal and Terry will be an equally good fit on Transportation. Considering their backgrounds, I know they will be an asset to their respective committees, and I look forward to working with them in their new capacities."
Badon, a coordinator of workforce development, was first elected in 2003 to represent House District 100 in Orleans Parish. Landry, formerly the head of the Louisiana State Police, was first elected in 2011 to represent House District 96, encompassing parts of Iberia, Lafayette, and St. Martin Parishes.

Naughty and Nice
It’s Christmas season and as we know, it’s time for the naughty and the nice to get their just deserts. The Louisiana Democratic Party are taking the holiday tidings with its Naughty and Nice Awards, taking place today: check it out and more to come
https://twitter.com/search?q=%23NaughtyNiceLA&src=typd 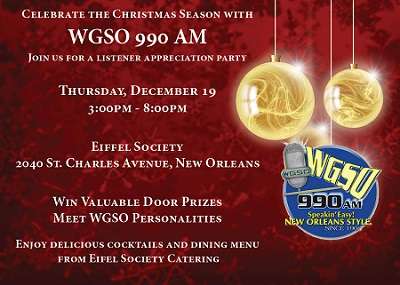 LABI, the Louisiana Association of Business and Industry (LABI), is hosting with one of the country’s pre-eminent conservative speakers, Charles Krauthammer, as the featured luncheon keynote speaker during “Competing in a Global Economy” at LABI’s annual meeting presented by Cajun Industries, LLC on Jan. 15, 2014.

Krauthammer writes a syndicated column for The Washington Post for which he won the 1987 Pulitzer Prize for distinguished commentary. He is a contributing editor to The Weekly Standard, The New Republic, and a weekly panelist on Inside Washington. He is also a contributor to FOX News, appearing nightly on FOX's evening news program, Special Report with Bret Baier.

Tickets for this exciting event are available online at LABI.org/events.

The Forward New Orleans (FNO) coalition, which includes community, business and civic organizations, gathered today at the Youth Empowerment Project’s Youth Center in Central City on Tuesday to announce its 11 issue platform for the 2014 municipal elections. The platform includes mandates on the criminal justice system; city finance; civil service system; blight; economic development; protection of economic opportunity for local businesses, small businesses and disadvantaged business enterprises; city services and infrastructure; Sewerage and Water Board; city contracting; public education; and institutionalization of best practices. Each category is endorsed by some of the city’s most engaged and influential community organizations.
Founded in 2009 with an inaugural seven issue platform, Forward New Orleans is a diverse, issue-focused community initiative led by the Business Council of New Orleans and the River Region. It is an inclusive collaboration with 25 civic, neighborhood and business organizations, all of which are committed to improving the quality of life in New Orleans.
The announcement of the Forward New Orleans 2014 platform was made by Suzanne Mestayer, chairwoman of the Business Council of New Orleans and the River Region. According to Mestayer, “Forward New Orleans is a proven initiative of a broad coalition of civic organizations, all of whom are dedicated to the continuous improvement of our city and its government. We are pleased to be working in tandem with elected officials on key issues of importance.”
Gregory Rusovich, former Business Council chairman and a spokesperson for Forward New Orleans, said, “Our goal is all about togetherness and ‘stick-with-it-ness.’ We’re laser focused on ensuring transparency, accountability and a highly effective delivery of government services by political leaders.”
He added, “New Orleanians are highly resilient and deserve a quality of life second to none. We are dedicated to continuing to build on the rebirth of our city, and through Forward New Orleans, we are, indeed, forging our future.”

TheForward New Orleans coalition members include: Beacon of Hope Resource Center, Broadmoor Improvement Association; Citizens for 1 Greater New Orleans; Business Council of New Orlea ns and the River Region; Committee for a Better New Orleans; Common Good; Court Watch NOLA; Greater New Orleans, Inc.; Louisiana Associated General Contractors; Metropolitan Crime Commission, Inc.; National Black Chamber of Commerce; Neighborhoods Partnership Network; New Orleans Chamber of Commerce; New Orleans Convention & Visitors Bureau; New Orleans Police and Justice Foundation; New Orleans Regional Black Chamber of Commerce; Partnership for Youth Development; Puentes New Orleans; Son of a Saint; Stand for Children; Urban League of Greater New Orleans; Vieux Carré Property Owners, Residents and Associates; Young Leadership Council and Youth Empowerment Project (as of 12.12.13).
Over the next few weeks, the Forward New Orleans coalition will present the platform to candidates for Mayor and City Council in an interview setting and request written pledges to execute on it. Before the election, Forward New Orleans publishes a scorecard that shows each candidate’s willingness (or unwillingness) to align on each issue. After the election, for the duration of elected officials’ terms in office, Forward New Orleans publishes periodic, issue-focused accountability reports that both acknowledge progress and highlight shortcomings, all in an effort to advance action on the platform.
What Is Being Asked of Candidates?
Within the framework of the 11 issues, candidates, once elected, will:
Embrace national best practices, peer-city benchmarking and performance metrics, allowing these objective criteria to drive major decisions
Be aligned with the citizens in searching for better ways to conduct city business; have the courage to introduce and defend reform measures
Believe in full candor and have zero tolerance for self interests, dishonesty and political gamesmanship
Exhibit careful, deliberate leadership that improves local morale and public perception, and unites all New Orleanians in their common hope for a better quality of life.

If it's Wednesday (or any day), there's always time for the Republican Party to link Louisiana US Senator Mary Landrieu what it deems to be the failures of Obamacare.  Here is the latest from the Republican National Senatorial Committee:

One roadblock after another, the Obamacare train and its supporters are approaching the end of their track as we learn more about the impact the Affordable Care Act will have on American small businesses.

Yesterday, an article published by Politico pointed out, “Think the canceled health policies hurt the Obamacare cause? There’s another political time bomb lurking that could explode not too long before next year’s elections: rate hikes for small businesses.”

Beginning next year, small business owners will be forced to comply with a litany of new rules and regulations that, experts say, will increase premiums across the board.

This startling revelation is contrary to what Senator Mary Landrieu has repeatedly told Louisiana small business owners as she attempted to sell them on Obamacare.

Her Senate website reads, “As chair of the Small Business Committee, she is leading efforts to ensure all small businesses have…superior health insurance at a low cost…” (“Biography,” Landrieu.senate.gov, Accessed 12/17/13)

In 2009, Landrieu again insisted that Obamacare “Drives down costs and expands affordable health care choices for millions of families and small businesses.”

“I am voting for this bill because it achieves the goals I laid out at the beginning of this debate: it drives down costs and expands affordable health care choices for millions of families and small businesses in Louisiana and around the nation. Any claim to the contrary, is a pathetic lie meant to derail this bill, a tactic that was all too common during this debate,” Landrieu said in 2009. (Sen. Mary Landrieu, Congressional Record, 12/22/09, S13736)

“Once again, Senator Landrieu’s rhetoric doesn’t match the evidence,” LAGOP spokesperson Ryan Cross said. “Mary Landrieu’s flagrant support for Obamacare is continuing to chip away what’s left of her credibility and poll numbers. Only the federal government can successfully get away with defrauding the American people and dropping the ball on something of this scale.”

As Michael Goodwin succinctly explains in the New York Post, "Consider that it now appears that not a single major promise made about the law will turn out to be credible. When it comes to delivering the product as sold, there’s no there there. In private business, that’s called fraud."

More in this category: « Biden's Trip To Gulf Coast Is Much Ado About Nothing BP Oil Spill: Jindal, BP, Biden In Requiem of A War »
back to top