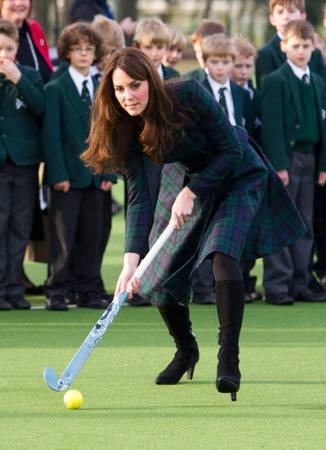 Last week, Christmas week, the Daily Mail treated us to a plethora of photographs of a thoughtful-looking Prince Charles, a subdued-looking Camilla, pretty in soft blues, a very pregnant Zara Phillips, a scruffy-but dashing Prince Harry just back from the Antarctic, Princesses Beatrice in an odd-looking coat, the Queen in minki-mink, and...and....and...

Who was that stewardess for Caledonian Airways in the midst of all the Royals and their spouses?

You know who. The stewardess in that plaid Black Watch tartan coatdress, her green airline flight chapeau cocked at a jaunty angle, with short black gloves ideal for unscrewing the twisty tops off those tiny gin and whiskey bottles that fill the drinks trolleys and make tinkling little bell noises when they are pushed up and down the airplane aisles?

Sure looks like she works for Caledonian– the Scottish airline– to me.

You are telling me that the Black Watch tartan-wearing stone-cold-smiling gal in the short black gloves and green little hat was none other than Kate Middleton?

I couldn’t tell, through all the great mess of tangley hair!

But I should have known, because Caledonian Airways went out of business a while back, or was, rather, bought up and traded and bought up and traded and then became Thomas Cook Airlines. And before that denouement, the Scottish airline was acquired by British Airways and...and...and...isn’t that the same airline where Carole Goldsmith, air stewardess, met Michael Middleton, the man who would have been an air pilot but never quite took off, so he skirted around and became, oh, the fellow who counts the tiny gin and whiskey bottles on those little trolleys that Carole Goldsmith pushed about while wearing her best chapeau and short gloves?

Yes, I do believe that is true. Michael Middleton counted the little bottles on the trolley, and then made sure that the trolley got re-filled with even more tiny gin and whiskey bottles.

And Carole Goldsmith was the babe in the Black Watch tartan coatdress who pushed the trolley back and forth, her hands ensconced in delicate short gloves, her best court shoes spit and polished, her little green stewardess chapeau tilted at a jaunty angle.

And wearing small good earrings at all times.

Just like those oak nut clusters on the Middletons’ tony new coat of arms indicate, the nut doesn’t fall far from the tree.

Unless the squirrels get it first!

But back to that Caledonian Airways stewardess Black Watch tartan dress with the little green hat. Our time machine is now taking us back to, oh, back to 1977, before the era of special meals, personal movies, donut neck pillows and vegetarian plates but after Carole had completed her air stewardess training course and Michael Middleton had acquired his "flight dispatcher" uniform that looked deceptively like the pilot’s he may have so wanted to be– navy blue jacket, gold stripes on the sleeves, crisp white shirt and navy tie. The only thing giving away the fact that Michael was basically a little gin and whiskey bottles counter was his bright red hat.

Maybe the rule at British Airways was that if you saw anyone looking like a pilot but wearing a bright red hat, you were not to let him actually fly the plane itself, but stick to counting the tiny gin and whiskey bottles on the trolleys.

"Don’t let that fellow in the bright red cap into the cockpit!" the cry would arise.

So despite wanting to be a flying ace like his father, Michael Middleton had to retreat to maneuvering the trolleys and counting all those tiny gin and whiskey bottles.

And the sexy gal in that Black Watch coatdress with the fetching little green stewardess hat and good earrings.

Smoking ciggies with hot-number Carole Goldsmith, snuggling in the galley, and counting the little scotch and gin bottles led to more inspiring moments, and before you could quote a passage out of Napoleon Hill’s "Think and Grow Rich," Carole and Michael had shacked up together, just like Mike Tinsdale and Zara Philips did, and even Sophie and Prince Edward, so what hey, there’s no shame in that anymore, right? And then, Carole and Michael moved to Slough, bought a house together in Berkshire and then got engaged (yes, allegedly in that order), got married, Carole got pregnant with Kate, and pretty soon Carole’s career as an air stewardess just vaporized. Ffffttttt! Like stubbing out a ciggie in a British Airways wet stainless steel sink.

Local folklore relates that Michael Middleton descends from a family of wealthy lawyers, plus Carole and Michael took a runner for about two years to the Kingdom of Jordan, where Michael had been promoted to "station manager" and double-checked the counting sheets of his now-underlings who were counting the little gin and whiskey bottles on the drinks trolleys on British Airways flights arriving at Queen Alia International Airport.

One might remember Queen Alia as being King Hussein’s third and favorite wife (before the he married the beauteous American Lisa Hallaby who he then transformed into Queen Noor) who was also Palestinian and ended up tragically being on board a helicopter that just blew up one day. Or maybe it just crashed in an unexpected rainstorm. But prior to becoming Jordan’s Queen and being blown to bits, Alia had worked in public relations for Royal Jordanian Airlines– back when it was known as "Alia Airlines"–not named after her, but named after King Hussein’s eldest child, Princess Alia, born to his first wife and distant cousin, Princess Dina.

Add another "a," and it would be "Princess Diana."

See? Like I keep telling the conspiracy theorists, it really IS all connected!

Even when it’s not.

But anyway, somewhere between Carole giving birth to Pippa and uprooting the whole family and moving to Jordan in 1984 to supervise the little gin and whiskey bottle counting in Amman, Carole must have set aside her favorite Black Watch tartan air stewardess outfit, swathed it in plastic, stuck it in the back of her closet, and swore that, "One day, one of my daughters will wear this Black Watch tartan outfit and jaunty green hat to Christmas church services at Sandringham and become Queen."

And then, Carole recited some passages from Napoleon Hill’s "Think and Grow Rich" (because "The Secret" had not yet plagiarized from it yet), and wrote down some mumbo jumbo, and quick as you can stubb out a burning ciggie in a wet stainless steel sink, the Middletons were whisked back to Berkshire where Michael went back to counting tiny gin and whiskey bottles and Carole then created her own business, "Party Pieces," and it made quite a boom.

And made millions. Reportedly.

All along, though, just like Orson Wells whispering "Rosebud" to his childhood sled, Carole would rummage through her closet where she still kept that Black Watch tartan stewardess outfit and matching green hat and say, someday, someday, if I keep chanting from Napoleon Hill’s "Think and Grow Rich," then someday, SOMEDAY, little Kate or Pippa, or perhaps little Kate AND Pippa, will grow up to seduce royal princes, have a long and complex sexual relationship with them, smoke ciggies in the galley together while taking slugs from little bottles of gin and whiskey, and....and...and...if the incantations work, then one day, they will marry royal princes of full blood, and...and...and...one of my royally-married daughters can wear this Black Watch tartan air stewardess dress and jaunty green hat that I have saved for low these many years when she goes to Sandringham to spend Christmas with the Royal Family and walks into the church.

Throw in some short little air stewardess black gloves (perfect for opening those twist-top tiny bottles of gin and whiskey and serving the cocktails from the drinks trolley), and you have exactly what Kate Middleton wore to Sandringham for Christmas, 2013.

If you think that I am making up some of this, you would be right.

But if you think that I am making up ALL of this, well, I invite you to check out the Caledonian Airways vintage air stewardess uniforms in Cliff Muskiet’s collection athttp://www.uniformfreak.com/1caledonian.html.

Like the conspiracy theorists say, see? It’s all related.

Even when it’s not.