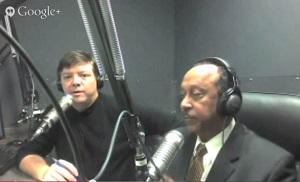 Judge Michael Bagneris, candidate for New Orleans Mayor said on Jeff Crouere’s WGSO 990 radio show on Tuesday that he would win outright in the first primary and not be in a runoff with Mitch Landrieu, the current incumbent.

The last fifteen minutes of radio broadcast was also webcasted live by Bayoubuzz site using Google Hangouts.  Crouere and Bagneris were in the WGSO studio in the New Orleans CBD, Bayoubuzz participated in the hangout from Jefferson Parish.

The Judge also said that if elected, he would not utilize the Deputy Mayor system employed by Mitch Landrieu and supports reopening the Glover case which has rocked the city after claims of police brutality and wrongful deaths arising from the aftermath of Hurricane Katrina.