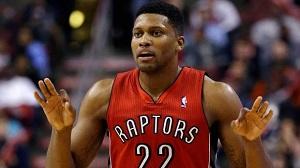 Just one year after coming to Toronto from Memphis, Rudy Gay is on the move again. The Raptors have traded Gay along with Aaron Gray and Quincy Acy – both reserves – to the Sacramento Kings in exchange for forwards Chuck Hayes, Patrick Patterson and John Salmons.

For the struggling Raptors, the move didn’t come as a complete surprise. Gay may have been averaging 18 points a game for Toronto this season, but he’s at a career low with his shooting percentage – it’s just 38.8% this season. While Gay came to the Raptors with high expectations attached, he just hasn’t delivered what the team was looking for. With a salary of $17.8 million this season – and a $19.3 million option for next year – the Raptors were overpaying for the performance they were seeing on the basketball court. According to the Raptors’ GM, Masai Ujiri, the team was happy with Gay’s attitude and talent, but felt that there was no chemistry. Ujiri summed it up at Monday’s news conference, saying simply, “Phenomenal talented player. It just wasn’t working.”

For the Raptors, this is yet another chance to rebuild the team – although fans must be starting to get fed up waiting. Trading Gay gives them the financial flexibility to go after other players who may be a better fit. Let’s face it – Toronto hasn’t got any hopes of winning this year, so taking the team apart to start reinventing it is a smart move. If that results in even more losses in the short term, then this will only improve the Raptors’ chances in the draft lottery. However, there’s a chance that things will actually start to get better – with Gay’s shot percentages this season, seeing the ball go to Kyle Lowry, Amir Johnson and Jonas Valanciunas more often may not be a bad thing. 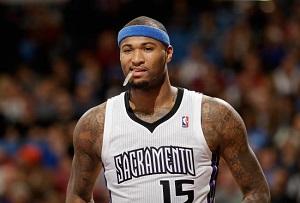 For the Kings, acquiring Gay is a key component of their own rebuilding strategy under their new owner, Vivek Ranadive. This is the second major trade this season for the Kings – they acquired Derrick Williams from the Minnesota Timberwolves on November 26 for Luc Mbah. Ranadive, an Indian-born software tycoon, has already made it clear that he is willing to take financial risks to turn Sacramento into a winner. Sacramento’s GM, Pete D’Alessandro, was pleased with the backing he got from Ranadive on the trade, saying that “We need players here in Sacramento and that’s just the bottom line. We’ve had a lot of really good backups for a long time, and now we are acquiring starters. That’s the first step.”

Sacramento, who are 6-13 in 2013 – including 6 straight losses prior to their recent wins against Utah and Dallas – will need Gay to hit the court running in order to salvage anything out of their season. Provided that he can return to the form of previous seasons, Gay has the potential to form a much-needed nucleus for the team – along with DeMarcus Cousins, who saw his contract extended for four years before the start of the season at a price tag of $62 million.