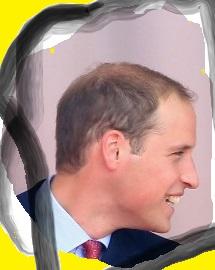 What does the boy-man Prince William need to prepare himself for his father’s own ascension to the throne?

Why, another "gap year," of course!

I mean, Poor William was so deprived because he only had one measly old "gap year."

"Gap Year." That is what the Brits call that year between high school and college when they take off for all kinds of luxury travel to learn fluent French or how to cook Indonesian foods, or work for a charity, or play polo (or work for a charity AND play polo), or study great Italian paintings or, or...something.

Something to do in between the annual family ski trip to Klosters.

Klosters, in Switzerland, where they have mountains and snow, like the Andes in Peru and Chile.

But without all those pesky poor people.

Sheesh! Don’t those pesky poor people know that they have already received three months of royal attention? In his gap year, Prince William came to them, descended like the blond, blue-eyed gods of ancient lore, and he, well, he hung around, he taught some English in the little pesky poor people’s school, he helped build some modest huts, he may have tied a bandage or two at the local infirmary, he may have sung some songs with some photogenic, rapt-looking pesky poor people’s kids, and...and...and....What more do they want?

Then, it’s on to Klosters! Or Mustique! Or the Seychelles!

And then, Prince William married the beauteous Kate whose crafty mother Carole also sent her over to do things with the pesky poor people in between living in a palazzo in Italy studying great Italian paintings, flew around in a helicopter for bunch of years, and in between there were lots of trips to Klosters! Mustique! The Seychelles!

Yes! Places where the pesky poor people, if any there be, know their proper place! As bellmen and baggage handlers, avalanche testers, shark decoys, and food tasters.

Oh, am I being too silly?

Right. I keep forgetting. The "new" Royals are so normal, aren’t they? Just like us! So much in common. Except those omnipresent pesky poor people. But I am not lying about that "gap year."

I seem to remember I had a gap week. A week somewhere between high school graduation and my summer job delivering eye glasses from an optical company to downtown ophthalmologists, where I did lots of laundry and washed the cars and had to pack my bags and somehow get to college. But not a gap YEAR.

Yes. Prince William is taking a new gap break away from work, away from his wife, away from his newborn son, in order to learn a thing or two about how to run a great estate, as in the Duchy of Cornwall, from which not all, but a great big chunk, of Prince Charles’s immense personal wealth derives. Of course, once Charles becomes King, as he surely will (despite what The Globe has to say about it), Charles will then come into the BIG money, and the Duchy of Cornwall will be just a little chicken feather of a money-maker in his cap of vast and enormous wealth.

But the great estate of the Duchy of Cornwall will then pass to William, who may then be declared, "The Prince of Wales." It’s not an automatic thing, becoming Prince of Wales, and someone might actually have the presence of mind to invite the Welsh people to take it to a vote or something, you know how much those pesky poor people enjoy doing things like voting, bless their little mindless hearts!

Anyway, the British newspapers tell us that Prince William, who grew up on his father’s own great estates and is now, what almost 32 years old, has had absolutely NO experience with running a great estate, which is, as I understand it, a kind of farm, and so now, Prince William is heading to Cambridge University to study...farming, and how to run a great estate.

In between those trips to Klosters, Mustique, and the Seychelles.

And all those trips to Africa, and playing polo, and taking care of the pesky poor people.

Yes! Prince William is having another gap year, but this time he will be spending it at school, because apparently, when he attended St. Andrews, none of these weighty responsibilities were even being thought of by those courtiers in charge, and now it just all hurry, hurry, let’s catch up, let’s suspend all duties and all visiting and all princely tasks so that William can take some more time off to go back to school, but this time, to a really BIG school that can give you a special course all by yourself so that you can learn about the family farm business that you grew up on but apparently failed to absorb anything about.

Like visits to farms and great landed estates like the ones William grew up on. Fields of wheat and barley, lots of cows lowing and sheep bahhing and horses being raised and nurtured for either Grandma’s race track or the polo fields.

And not a pesky poor person in sight!

And there will still be snow in Klosters by the time the Cambridge gap time is done.

Prince William’s gap year at Cambridge and elsewhere will surely come as a shock to readers of The Globe, who have all been predicting that Prince William and Kate Middleton would head directly into the top job of King and Queen Consort in the event of Queen Elizabeth’s death. However, it sure doesn’t look like things are headed in that direction. Nope!

Now, they want to keep William and his wife down on the farm.

How are the courtiers ever going to do that?

Why, tell Willy and Waity that it’s just another gap year!

Milking the cows and shearing the sheep and harvesting the grain... Ah, the beauty of those cold, misty mornings full of layered grays when the dew just rests ever so gently on each blade of grass and the farmer climbs up on the tractor and heads out to his fields and...and...

Will farm wifey Kate Middleton come running out on the wooden porch, wearing her best gingham dress with an apron to keep the spills away, wave to her tractor-man hubby Prince William, and cry out, "I’ve got pancakes on the griddle, darlin’, and the sausage is hot, and the buns are in the oven, and the coffee is a-perkin’, and...and...and..."

"And I’ve got two first class tickets to Mustique, the helicopter taking us to Heathrow is landing in the clover field, I’ve packed my bikini and my ciggies and am good to go, and the nanny’s got George, and we need to go to a place where the pesky poor persons are not so omnipresent..."

In the middle of William’s gap year?

Mind the Gap, as they say in England. Anything can happen then.