GOP leaders not listening to the people on immigration reform 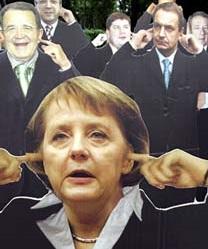 It is clear that the House GOP leadership is preparing to take action on the immigration issue this year. According to reports, the “principles” of immigration reform will be introduced next week and it will include a “pathway” to citizenship for the estimated 12 million illegal immigrants in our country. The bill will reportedly also mandate improved border security, provide additional visas for foreign workers and require those immigrants seeking legalization to learn English and pay certain fees.

The net effect of this legislation will be to provide “amnesty” for millions of immigrants who ignored our laws to settle in this country. It is a way of rewarding lawbreakers while insulting the Americans who dealt with the arduous process of legally becoming a citizen.

Each year, 1.2 million individuals legally become United States citizens. This legal immigration process should only be expanded if our country needs to import a larger talent pool of workers in certain types of industries, such as healthcare.

House GOP leaders claim that they need to take action on immigration since it is a supposedly pressing issue impacting the country. However, new poll numbers show that Americans are much more concerned about other issues. In fact, according to a new Gallup poll, immigration reform ranks at the bottom of the list of top priorities. The poll showed that only 3% of Americans listed immigration reform as a top priority for 2014.

In the view of Gallup’s Lydia Saad, Americans believe “the government” is the most serious problem facing the country with 21% of respondents listing it as the top priority. Poll respondents ranked the economy as the second most important problem, followed by unemployment/jobs and healthcare.

In the poll, Americans cite healthcare, jobs, the economy, foreign aid, the debt and deficit, poverty, income inequality and ethics in government as much more important issues than immigration reform. In effect, a plethora of issues rank above immigration as deserving of attention from Congress. Nevertheless, Washington politicians are moving ahead on immigration legislation, ignoring the wishes of the American people and taking their marching orders from special interest groups such as the Chamber of Commerce and Hispanic advocacy organizations.

Immigration legislation will allow big business interests, influential in the GOP, continue to recruit cheap foreign labor. It also provides Democrats with a steady stream of loyal voters. In the last presidential election, Barack Obama enjoyed the solid support of 73% of Hispanic voters.

If an immigration deal is reached this year, it will lead to more illegal immigration in the future. This is what happened after 3 million immigrants were given amnesty in 1986.

Giving legal status to millions of undocumented workers will clearly displace more Americans from jobs. It will add to the large pool of 102 million Americans who are either unemployed or outside of the labor force.

Fortunately some House Republicans see the danger involved in this issue. Last week, a 16 member GOP group led by U.S. Congressman Mo Brooks (R-AL) wrote an urgent letter to President Obama warning that “Rapidly expanding unskilled immigration – at a time when factory work and blue collar jobs are disappearing – would represent the final economic blow for millions of workers who have been struggling to gain an economic foothold.”

Representative Brooks has his priorities in the right order. More of our leaders should be focused on ways to help struggling Americans, not on rewarding those illegal immigrants who ignored our laws.

It is time to finally listen to the American people instead of making them suffer from another piece of legislation that will do nothing but decrease their job opportunities and their standard of living.

More in this category: « Vitter, Dardenne, Kennedy, what's going on in Governor race? GOP leaders not listening to the people on immigration reform »
back to top