Hanging Out With Politicians with Google Hangouts Politics 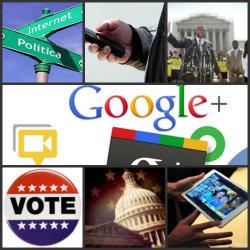 The days when people had to cram together in crowded rooms to attend public meetings, make long-distance phone calls, or travel far to try to influence or pose questions to politicians are long past. Now, you can sit in Alaska (or anywhere) and upload your questions or concerns to the Internet. You might then get your answers directly from your politician through private or public Google Hangouts that you can watch and listen to on your computer, tablet, or smartphone.

According to Roll Call's Kelly Ross, several US Senators have embraced Hangouts as a tool to keep in touch with their constituents. After being introduced to the service by Google staff, Eric Cantor (Virginia), Chris Murphy (Connecticut), and Susan W. Brooks (Indiana) are only some of the Washington DC elected or appointed officials who have participated in hangouts on topics as various as gun-related legislation, Syria, and student loan interest rates.

The White House has also adopted Hangout as a communication channel. In 2013, both Vice President Joe Biden and Secretary of State John Kerry participated in hangouts. Steve Grove, Head of Google+ Community Partnerships, described the Biden hangout as “thoughtful, un-scripted, and raw.” These words, however, would probably not be the top choices if a group of disappointed viewers were to describe President Obama's 2012 Hangout. While some were content, many were outraged by Google's choice to ignore the highest-ranked questions that concerned marijuana legalization. Ryan Hacunda raised his opinion on the White House Google+ page, stating that “ignoring the questions that were voted most popular on the Youtube page really does point out how little [Obama] wants to actually discuss issues with the American people.”

Although Hangout allows politicians to reach people usually not engaged by more traditional political communication channels, episodes like this might raise distrust in the truthfulness and freshness of this type of conversation.

Questions: How would you like to use hangouts to interact with politicians and elected officials?  Log in and talk about it below..