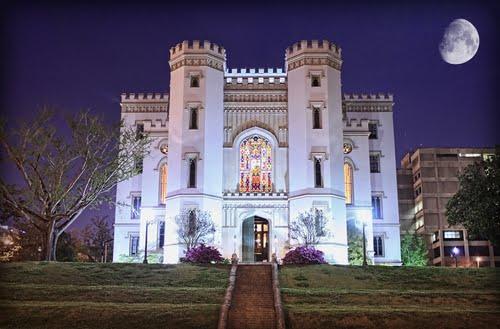 Governor Jindal is revealing his budget numbers today and the Louisiana Democrats are raising their questions;  According to Larry J. Sabato of the University of Va., the U.S. Senate races are wild toss ups, both here in Louisiana and throughout the United States; The Louisiana Republican Party have taken care of their own internal business as they prepare for another year of domination; A National Republican organization is seizing the moment, that is, President Obama's State of the Union Speech to make its political points against Democrat Mary Landrieu.

These are the political stories today as the politcal world churns:

GOVERNOR JINDAL, SHOW US THE NUMBERS

Louisiana governor Bobby Jindal is ready to show us the numbers.  However, Louisiana Democratic Party Chair Karen Carter Peterson is ready for his math.

Today, Jindal will unveil his budget proposal to the legislature, and the top Democrat is asking some basic addition and subtraction questions.  Inquires such as how  the administration “plans to fund a $10 million increase for programs that help people with disabilities, which Jindal slashed with a budget veto last year.”

“Our governor always wants to demand accountability from others, but he’s refusing to show the math when it comes to his budget,” said Louisiana Democratic Party Chair Karen Carter Peterson. “On the surface, today’s announcement seems like good news, but the devil is always in the details with our governor. Where are these funds coming from? What is the status of the $1.5 billion in federal recovery dollars that the governor is sitting on?

“If the governor is simply moving money around, we think that is a bridge too far. Unfortunately, the governor’s press conference today left us with more questions than answers. At the end of the day, we should not be pitting groups against one another in competition for state funding; we should be working to boost revenue and craft a fiscally responsible and honest budget that works for all Louisiana families.”

Earlier this week,  Jindal announced a funding increase of $141.5 million for higher education institutions for the next fiscal year. The funding hike represents a 6.66 percent increase over the budget for the current fiscal year. This funding includes a new higher education workforce incentive initiative of $40 million that will better prepare Louisiana students to compete in the new global economy.

Jindal is also asking lawmakers to include $60 million in next year's budget to give pay raises to state workers.

According to Larry J. Sabato of the University of Virginia, Louisiana’s U.S. Senate Race is now a “toss-up”.  Along with Louisiana, Sabato finds Alaska and North Carolina in the “your-guess” stratosphere.

“We’re not going to underestimate Sen. Mary Landrieu (D-LA), who has won three tough races and who benefits from a sterling political name, but TOSS-UP is the more realistic rating here than Leans Democratic. Despite some problems on his right flank, it’d be shocking if Rep. Bill Cassidy (R) didn’t advance to a possible runoff, and such a runoff — which could decide the Senate depending on what happened elsewhere in the country — would be a nationally watched December electoral overtime. Democrats would have reason to worry about turnout problems in a runoff, although it’s worth noting that in Landrieu’s last midterm runoff, in 2002, the total number of votes only fell by about 11,000. The last major post-general election Senate runoff nationally came in Georgia in 2008, where turnout dropped 1.6 million votes (!) from the general, producing a more Republican electorate that powered Sen. Saxby Chambliss (R-GA) to a relatively easy win after Democrat Jim Martin held him under 50% in the regular general election. But, remember, 2008 was a presidential election year, where the general election electorate is a lot bigger. A Louisiana midterm runoff would be different and, admittedly, hard to predict — another reason why we’re changing this race back to the Toss-up category.”

Also, based upon the University of Virginia Center of Politics map,  democrats might be in trouble.

Republicans lead Democrats 49-48 along with the three toss up states at risk.

The Louisiana Republican Party Party took care of some important business on Saturday as they prepare for a critical election season.

According to a press statement from the LAGOP:

Villere complimented to those who sought election as officers of the LAGOP.

"Congratulations to Tommy French, Dan Kyle and Lillie Brady on their re-election as LAGOP officers. I also want to congratulate Mike Bayham and Wallace Lucas on their strong campaigns and thank them for their tireless work in promoting the Republican Party," Villere said.

Congressman Bill Cassidy spoke to the SCC members and guests and provided an update on the Senate race. He encouraged the 200+ grassroots activists and thanked them for their tireless work and dedication to defeating Mary Landrieu.

The LAGOP staff unveiled its redesigned website, www.lagop.com, discussed the upcoming launch of “Project: Geaux Red” and www.MasqueradingMary.com. Those present were also given an update on the 2014 Republican Leadership Conference.

The national republicans are trying to link Mary Landrieu and other Democratic U.S. Senators to President Obama’s upcoming State of the Union Speech scheduled for Tuesday.

In a press statement, the National Republican Senatorial Committee said, in part:

Ahead of his State of the Union address, President Obama already appears frustrated, vowing to work around Congress by using executive authority to usher in a "year of action."

Five years into the Obama/Landrieu economy, there are 10.4 million Americans unemployed, and the labor force participation rate has shrunk to its lowest level in nearly 40 years. There are nearly 3 times more unemployed Americans than there are jobs available.  Mary Landrieu will call this a recovery, but middle class Louisianans know better.

Five years into the Obama/Landrieu economy, there are 10.4 million Americans unemployed, and the labor force participation rate has shrunk to its lowest level in nearly 40 years. There are nearly 3 times more unemployed Americans than there are jobs available.  Mary Landrieu will call this a recovery, but middle class Louisianans know better.

"What reason do Louisiana voters have to vote for Mary Landrieu, who is completely out of sync with them on job creation, spending, and ObamaCare? The answer is simple, none,"said NRSC Press Secretary Brook Hougesen. "Whether it's higher taxes, ObamaCare, or a bigger, more abusive and intrusive government, President Obama's 'year of action' strategy is designed to usurp the will of Louisianans. Mary Landrieu has repeatedly put President Obama first, a fact that continues to hurt Louisiana."