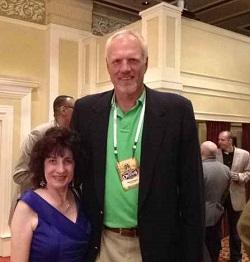 It is comprised of players, who have stood out among the rest of society, not just by stature but by deeds.  It is sadly, also a group of men (and now women), many who have health issues, in part, due to pounding and tears arising from injuries and impacts from their athletic-playing days.

The NBARPA is made up of former professional athletes, the best-of-the-very-best  to ever play this exceedingly fast-pace game that requires the optimum use of speed, strength, endurance and intelligence.

This collection of over six hundred former stars and superstars, many who, literally have been giants on the court and within the adoration of fans throughout the world, also have issues that at the time they entered pro ball appeared meaningless and now takes on a larger-than-life concern--the lack of a solid education needed among all walks of life, even within the towering paths habitated by legends of the game.

With the National Basketball Association annual All-Star game approaching in less than two weeks, I had the esteem opportunity to interview, not only a friend but a true New Orleans hero, Fielkow.

After the horrors of Huricane Katrina, Fielkow, who had only lived in the city for a few years, was fired by Saints owner Tom Benson.  According to accounts (and as stated on Wikepedia), when the Vice President refused to resign and sign a confidentiality agreement presumably because of Fielkow's outspoken concern for the residents of the Gulf Coast, Fielkow was axed. Fielkow opposed the prospects of the Saints moving to San Antonio Texas.  Ultimately, as a result of the outcry and with the help of the NFL, Benson retreated and returned to New Orleans after only a year away from home.  The rest is history--renovated Super Dome, Steve Gleason blocked kick, Drew Brees and, the Super Bowl

Months after the storm, the citizens of his New Orleans district remembered Arnie for his dedication and deep personal sacrefice and elected him to council office.  Years later, he became the President of the City Council.  As an advocate for the needy, yet, as a captain of industry, the NBA Retired Players Association was too good of an opportunity to pass up, a great fit--which was the NBARPA's gain and the city's loss.

However, in August 2012, Fielkow brought the organization down to New Orleans and then, once again, is building bridges between the greatest former athletes in the world with one of the dynamic, yet, troubled cities in the world, New Orleans.

In part one of the interview, Fielkow discussed the efforts of the organization and the players to help http://www.bayoubuzz.com/buzz/item/604491-arnie-fielkow-google-hangout-with-nba-retired-players-assn-pres-part-1

Here is the narrative of part 2 and the actual video of the interview's key points:

Within the membership we have literally all of the great players.   I think we have like 48 out of the top 50 players that are considered the best of all times.  I mean..Magic Johnson and Kareem Abdul Jabbar.

You know, people that, all our members more than active than others.   But some of the guys coming down for for sure at All-Star weekend, like Rick Barry who is on our Board of Directors--Spencer Haywood, who some years ago really stepped the legal precedent, In professional basketball, in terms of draft ineligibility--Otis Birdsong who is the chairman of the board, a phenomenally great player for a number of years.

During the course of the weekend, and we'll be stationed and anybody who wants to stop by our host hotel is the Marriott hotel on Canal Street--during the course of the weekend people will run into all kinds of great players.  So I mean feel free to stop by we have a lounge upstairs where people can come in and say hello.  If you really want to get close and personal, come to our gala, come to some of our events that we are offering because most of the players will be there, it's a very exciting time.

It is fun for me a sports fan obviously, every day, I am on the phone with someone that at sometime followed as a kid.  There is probably two paramount issues that we deal with on on a daily basis.  One is certainly health. Our basketball players don't have a concussion issue that you see in football,  but you know you have a lot of orthopedic issues for example, they have some heart issues-- things that are difficult to our sport.   So we work very hard to get health options for our guys as they get older.  Our memberships range, young men in their 20s, all the way, folks up into their 80s, so is very diversified group and and now we have the women also because the WNBA are part of our membership as well.

The second issue we deal with, I will tell you, we are really taking a lead position on.  It is a topic of education.  I really think that the college system that exists today in basketball, especially where player can play one year and then moves on to professional sports while it legally passes muster and obviously a lot of players have fought for that right, the downside of that is that it probably 75% or more of our members do not have college degrees.  And we're making a very strong effort within the NCAA right now to put policies in place that if you play college sports and if the University obviously made money off of these players which they have, that those athletes should be allowed to go back to get their education at the universities expense.

As you know, education is the key to life and if you don't have an undergraduate degree it's very difficult to really realize one dreams.  So I would say that's a topic you see some movement on in the next year.  The NCAA seems very receptive to changing the system here and we're working very hard at that effort.

If a person wants to book a player to teach the son or daughter basketball we actually have that.  A lot of our guys are very good at coaching youth, for example.   You can actually hire our members.  If you want one of our members to speak at an engagement, a corporate outing, we do a lot of that with them or if somebody just wants to be able to talk to a player or have that player call their daughter on a birthday--you know there's a lot of different options so again with 600+ members these guys are wonderfully nice guys.  They are all looking to make a little bit of money on the side as well.  This is a program that we offer and we really get out in the community that done a lot of things--speaking to kids all over the country, right now

More in this category: « Will Landrieu reconcile he must run for Louisiana Governor to beat Vitter? O'Reilly, Obama Fox News show: Super Bowl of delusion »
back to top