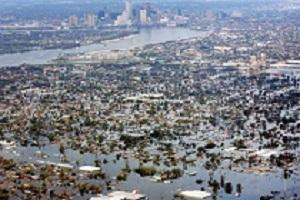 The Louisiana Democratic Party is trying to strike while the “going is hot” on an issue it, and apparently U.S. Senator Mary Landrieu, think could open up the flood gates of support in their favor.

Here are the facts as presented by the Louisiana Demos: The notorious billionaire Koch brothers’s Americans for Prosperity has run commercials against Mary Landrieu in Louisiana.   In November of 2013, Landrieu’s opponent, Republican Bill Cassidy attended an event hosted by the AFP where he thanked a AFP rep for spending money on the anti-Landrieu commercials.  http://youtu.be/t4KlWdXA95c

According to the National Journal, the Koch organization has spent over $3 million dollars taking on Landrieu.

Her seat could be critical to which party would control the U.S. Senate the next two years leading up to the Presidential elections.

One of the issues the Koch’s have strongly opposed is delaying the premiums on FEMA flood insurance.   The premiums are set to increase substantially due to the unintended consequences of the federal legislation supported by all members of the Louisiana Delegation.

Now, after realizing the impact of the law, the delegation, led by Landrieu, and business groups all over the state, have urged the Obama Administration and Congress to support a bill already passed by the U.S. Senate and which has moved onward to the US House.

It is rare when Democratic U.S. Senator Mary Landrieu and Republican U.S. Senator David Vitter are on the same page on any issue, but they are four square in support to preventing the flood insurance from skyrocketing.

According to GOP and Democratic lawmakers, including GOP Rep. Steve Scalise, GOP  Plaquemines Parish President Billy Nungesser,  and GOP Jefferson Parish President John Young, the impact upon South Louisiana, if the flood insurance premiums, are allowed to rise could be devastating and catastrophic to South Louisiana.   Worse, according to those supporting the premium delay, the entire nation will be seriously hurt because the property values will dramatically decline in the oil patch and seafood rich areas of the state literally creating ghost towns due to the homeowner’s  and  business-owner’s inability to pay the “premium”  freight, thus abandon the properties that are part of the very infrastructure that supports these industries.

The Americans for Prosperity has lobbied in favor of alternative legislation opposed by the Louisiana delegation.

The fly in the ointment, however, is Speaker of the House John Boehner, refuses to bring up the bill passed by the senate, thus, blocking the crippling delay to the premiums.

Earlier Thursday morning, the democrats held a telephone press conference slamming Congressman Cassidy for thanking the AFP for the commercials hurting Landrieu, yet,  South Louisiana in particular, and the nation, in general could suffer irreparable damage due to the overwhelming influence the Koch’s have upon the Republican Party and John Boehner.

Which raises the ultimate question, what should Cassidy do?

Should he publically distance himself from Boehner and the Koch’s on this issue?

Unquestionably, Cassidy is the primary beneficiary of the Koch commercials as he is the favorite GOP candidate running for US Senator.   However, the commercials are paid for and run by the AFP and are not campaign contributions to the Cassidy campaign.

So, just what can Cassidy and all of the Louisiana Republicans do to convince the AFP and Boehner that they are hurting the state in a way that state republican lawmakers and business organizations have claimed--could be worse than the combined impact of Hurricane Katrina and the BP oil spill.

This tactic of political guilt by association is not a new one, nor unique to this political crises.

David Vitter and the Louisiana GOP, successfully used it in attacks against Democrat Congressman Charlie Melancon in 2016.  Melancon opposed the BP oil spill imposed by the Obama’s administration.  Yet, because Melancon was a democrat, although arguably, a conservative one, he was lampooned as a Obama “yes-man”.

Vitter clobbered Melancon  in the elections, in part due to this very BP oil spill issue.

In essence, the LAGOP and Vitter made a major stink against Mary Landrieu and Melancon because they were democrats in an Obama land.

The Democrats appear to be trying to convince the Louisiana voters that Cassidy and his GOP brethren should take on the House Speaker and the “forces of evil”, the Koch’s on a critical issue that could have a devastating impact upon the state.

Below is a part of the press release issued today by the Louisiana Democratic Party in its attempt to maximize the possible flammability of this issue.

In doing so, it is attempting to paint a larger picture that outside republican forces are using their enormous financial capital to win elections in Louisiana to the detriment of the citizens of the state.

To some extent, this theme resonates.  Recently, David Vitter, has urged that money contributed to a PAC in his favor should be used for his run for Governor, even though the contributions would allow an unlimited flow of dollars prohibited by state law.

But of now, the Louisiana Democratic Party and its influence and infrastructure is so in disrepair statewide that even an issue-- as volatile as outside-the-state-“super-rich”-men supporting issues crippling to the state might not carry the water.  Sure, it could raise a few cuffs and trousers while the flood of anti-Obama anger continues to overflow, even to the point that Senator Landrieu’s own political turf is on quite soggy grounds.

AFP isspending millionsof dollars almost single-handedly waging an anti-Landrieu ad campaign on behalf of Congressman Bill Cassidy, whom the billionaire Koch brothers have endorsed. Bill Cassidy's public relationship with AFP dates back to at least November of 2013, when Cassidyliterally thankeda staff member of the IE group while campaigning at one of their events. He conveniently left the AFP event off of his official campaign schedule.

Last cycle, shadowy special interest groups linked to the billionaire Koch brothers spent hundreds of millions of dollars trying to influence the 2012 elections. If the last several months are any indication, they're planning to do it again.

Since September of last year, AFP has been blanketing Louisiana with millions of dollars worth of false, negative attack ads against Sen. Mary Landrieu. The beneficiary of their ad campaign is Congressman Bill Cassidy, whom the Koch brothers have endorsed.

Bill Cassidy's public relationship with the Koch brothers and AFP dates back to at least November of 2013, when Cassidy showed up unannounced at an AFP event and literally thanked an AFP staffer for their negative attack ads.

The thing about those negative attack ads… is they just aren't true. In fact if you visit Politifact.org, you'll see that not a single ad by AFP haseverbeen rated true, or even mostly true – but for AFP, that's par for the course.

You see, for AFP there's no such thing as accountability. AFP is set up as a 501c4, which means the group doesn't have to disclose a single source of its funding, not even a single donor. All of the millions AFP is spending go completely undisclosed. AFP is the embodiment of secret money in politics.

And when you get past their false attack ads and look at what AFP is really fighting for, one thing becomes crystal clear: AFP's interests are not Louisiana's interests, and AFP's agenda is plainly anti-Louisiana.

AFP supports slashing Social Security and Medicare benefits for up to 600,000 Louisiana seniors. The group advocated privatizing Social Security during the Bush administration. For Louisiana's seniors, that could have meant the end for their retirement savings during the Great Recession. AFP also supported the extreme Ryan budget plan, a plan that would have ended Medicare as we know it by turning it into a voucher program. That would mean increased costs by more than $6,000 for hundreds of thousands of seniors in Louisiana.

But AFP's anti-Louisiana agenda doesn't end there. AFP strongly advocated for Governor Bobby Jindal's disastrous plan to replace our income tax with a massive sales tax. We all remember how that went. If AFP had been in charge of our state government, we'd have raised billions in taxes on the backs of small businesses and the middle class in order to finance a tax cut for the super wealthy.

After advocating devastating cuts to Social Security and Medicare, and then trying to ram through Bobby Jindal's disastrous tax plan, now the Koch brothers and AFP are trying to kill the bipartisan flood insurance reform bill that passed the Senate last week.

Not only does AFP support Biggert-Waters, the very piece of legislation causing massive insurance rate hikes for 500,000 Louisianians, but while Sen. Landrieu was working alongside Sen. Vitter to lead Senate passage of the flood insurance reform bill to fix Biggert-Waters, AFP was trying to kill the bill.

In a letter to Congress, AFP instructed members of Congress to back an amendment by Sen. Pat Toomey because it would – QUOTE – "preserve the crux" – END QUOTE – of Biggert-Waters.

As we all know, fixing flood insurance isn't a partisan issue for Louisiana. Our entire delegation, including Congressman Richmond, Congressman Boustany and Congressman Cassidy, supports passing the Senate's flood bill… and AFP is standing in the way.

If AFP has its way, half a million in Louisiana will continue to suffer astronomical increases in the costs of their flood insurance. That's not what Louisianians want, and it's certainly not what we need to move our state forward.

The bottom line is this: what AFP wants would hurt Louisiana.

Between their efforts to kill bipartisan flood insurance reform, slash seniors' Social Security and Medicare benefits and enact Bobby Jindal's disastrous failed tax plan, it's clear that the Koch brothers and AFP aren't on the side of Louisiana families.

More in this category: « Waiting for Kate Middleton's baby to slide to royal birthdom Chehardy: Bitter Vitter’s shameful campaign should come clean »
back to top