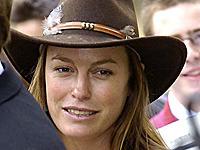 Prince William traipsed the red carpet at the February 17, 2014 BAFTA awards in a crisp tuxedo, doling out royal waves and fist bumps, rapping with rappers and chatting up the female fans pressed against the metal barriers, flashing a strange kind of smile best described on a man as "fey."

This weird smile makes William’s chin look long, and his nose even longer.

The following night, Kate Middleton took a solo turn minus Prince William, but accompanying Her Majesty Queen Elizabeth II and the always-a-good-sport-royal Prince Michael of Kent, to a Buckingham Palace cocktail reception for various stars of stage and screen.

Not content with having worn her attention-seeking "Look at me!" Jezebel-red dress to upstage the Queen at the monarch’s Diamond Jubilee extravaganza on the Thames last summer, Kate wore the scarlet outfit again. Unlike the day of Kate’s royal barge ride, when she wore her hair meticulously pinned up and pushed underneath a bright red "Look at me!" hat, this time Kate’s swirling mass of perennially messy brown hair vortexed around her face and neck like a whirling dervish of outdoor rainwater running down a storm drain. She was ever so matchy-matchy with black high-high heels and a black clutch bag, because Kate seems unable to function in public without something small and hard to press against her lower lady parts.

Queen Elizabeth did not look amused.

But Queen Elizabeth, the longest-reigning living monarch on the planet, always makes frownie faces in Kate’s company. The Buckingham Palace actors’ reception was no exception. Her Majesty scowled dourly in the company of the woman whom the tabloids are proclaiming is now pregnant with a daughter.

But all it takes is one look at the skin-tight scarlet dress that hugged the Duchess of Cambridge’s sides and displayed her protruding rib cage to see that, no way is Kate Middleton pregnant.

This does not mean that another "royal" baby will not, in due time, appear.

And along with that, another obstetrician will receive his knighthood.

But where was William?

Last week, Kate Middleton supposedly took Royal Baby Prince George out in his stroller with Lupo, the royal dog. It was thrilling to see that Lupo seems to be no longer banished from Kensington Palace, and is now back to cherry-bombing the Royal Collection’s best Oriental carpets. And newspapers and bloggers, inexplicably eager to transfer Princess Diana’s funereal title of the "people’s princess" to Kate, made much ado of Kate picking up Lupo’s doggie poo outdoors. "How wonderful!" "How normal!" "How un-royal and ordinary!"

As though dog-loving royals are all followed about by footpersons carrying silver salvers and picking up the royal doggie poo with silver tongs.

But where was William?

I guess that if Kate had been picking up rhinoceros poo, William would have been right there, lecturing about it, and urging us all to do it, too. And because the rhinos so beloved by Prince William are so endangered, it reasons to conclude that the rhinos’ poo must be very, very special. But William wasn’t present for Kate’s outing with Lupo (or should we say "Lupoo?"), and the stroller said to contain the live baby George.

Where’s the personal protection officer? And why isn’t he or she picking up Lupo’s poo?

Of course, the IRA might load the lawn with doggie poo so that the PPOs (as they are called) might put their guard down, and take their hand off the holster while finagling that plastic baggie thingy used to pick up Lupo’s poo. So perhaps it’s best for the Royal Walker, here Kate, to pick up the poo.

Anyway, we aren’t sure where William was the day that Lupo pooed in public in the park, but we know where William was the week before, after Kate was photographed transiting through airports to a multi-million dollar private villa on Mustique with a floppy-mopsy overdressed Royal Baby Prince George.

Prince William, it is said, was undergoing his own kind of transiting through Seville, Spain, with "friends" to engage in royal activities like hunting wild boar on the Duke of Westiminster’s Spanish estate.

Along with Prince William were his brother, Prince Harry, and...and...Jecca Craig.

She of the sleek and slender body, of noble profile, socialite daughter of Ian Craig, who owns the 55,000 acres game reserve, Lewa, that lies in the shadows of Mount Kenya.

British news reported that Jecca and William had a "pretend engagement."

Whatever a "pretend engagement" means!

Jecca doesn’t look like a gal who picks up doggie poo. I mean, as soon as she would try, no doubt a long line of male admirers all eager to dispose of the doggie poo would suddenly materialize and take care of everything–the plastic baggy, the poo, finding the trash can, having a little bottle of germicide readily available to sprits on the poo-gathering hand so that it doesn’t interrupt the hand-holding aspects.

Jecca’s truly beautiful face was often obscured by a brimmed leather hat much imitated by Kate, who was said to have displaced Jecca in William’s affections when they both arrived to St. Andrews. But was it true displacement, or did William simply fall under the mojo muttering spells of conniving Carol and Michael Middleton? Despite his marriage to Kate, all the beachy holidays, and the Middletons’ self-obsessiveness, Jecca always seems to have persisted in Prince William’s affections. Now that’s some good juju! And in Spain, hunting the wild boars, the Prince and his Ex seemed to be closer than ever, and having a fine time together.

Back at Kensington Palace, stewing. Sticking lots of pins into the Jecca dolly Kate keeps on her bed, and then tossing it to Lupo as a chew toy, or a prop to poo on.

But those black magic spells can easily backfire.

Was it then that Kate flipped out and showed up at the National Portrait Gallery to look at her own portrait yet again, in a too-long, blah-blah gown with a gigantic diamond necklace see-sawing across what little we could see of her neckline which was covered with brown hair like a giant bed of Sargasso seaweed? Looking dazed and confused, Kate arrived with a grimacing smile and gaping pie-hole mouth.

Kate looked like she had spent the previous five hours screaming "Jecca! Aaaaaughghghgh!"

If one wants one’s hubby to stop hunting boars with the babe, one has to get a grip.

Or maybe just a new hairstyle.

Call the new cut the "Jecca."

These days, just look and see where Kate is not.