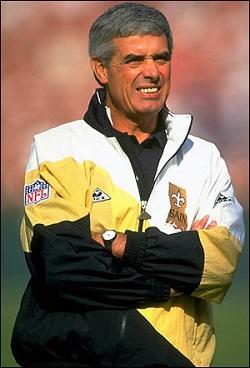 They watched as their team took the killing “thump” at the hands of an opponent, then they were rolled, bloodied and left for dead after enduring the bump-bump-bump of reporters’ questions on how the coach screwed it all up. As a reporter and later club executive, I have been both inquisitor and victim in the roadkill aftermath of big games, announcements or other convocations of thrust and parry. So it was with great empathy and even a bit of admiration that I read a transcript of Wednesday’s postgame press conference of Zinetula Bilyaletdinov. The 58-year-old head coach of the Russian hockey team faced a crowd of stunned Russian journalists after Finland eliminated his squad from the men's hockey tournament with a 3-1 win in the quarterfinals. It was a classic example of "you think you know, but you don't. In fact, you'll never know!" Wow, that reminds me of somebody.
To NFL and Saints fans, the poster boy of postgame press conferences was Jim Mora, who left his legacy on the art of the aftermath. In 1987, the Saints lost a close early game to San Francisco after which Mora declared he was tired of all the “coulda, woulda, shoulda” about his team. The bottom line, Mora said, was “we ain’t good enough!” It must be noted that after that press conference, the team went on an unprecedented nine-game winning streak to seal its first winning season and playoff appearance.
But Mora topped himself after becoming head coach of the Indianapolis Colts. His team was struggling with a rookie quarterback named Manning when a reporter asked the coach if that day’s loss hurt the team’s playoff chances “PLAYOFFS?” Mora said indignantly. “Are you kiddin’ me? P-P-PLAYOFFS? Don’t talk to me about Playoffs! I just hope we win a game" Mora has a kindred spirit at the Winter Olympics as Bilyaletdinov's postgame press conference to the ink-stained Russian wretches offered evidence of how much the loss shocked Russia and how the coach handled it:
Q: Is this a catastrophe? A: This has certainly been an unsuccessful appearance. Let's not play with words. I told you, we were unsuccessful. Call it what you will.
Q: Mr. Bilyaletdinov, in what way, exactly, do you see yourself at fault for what happened? What would you have done differently if you could turn back the clock? Maybe you should have played [Alexander] Ovechkin and [Evgeni] Malkin on separate lines? Did you want to try this, and if so, why didn't you? A: I don't want to talk about this now. I'm at fault for everything. I didn't fulfill the task before me.
Q: What do you have to say to the fans? 12,000 came to this match and many more watched on television. A: I apologize to the fans for this result. We were unsuccessful, and the expectations were totally different.
Q: You said that the analysis will come later. But what mistakes can you talk about now? A: There were individual mistakes. That's why we couldn't affect the result even though we had twice as many chances as the opponents. We just couldn't score.
Q: What future, if any, do you see for your own work and for your coaching staff? Because, you know, your predecessor was eaten alive after the Olympics.A: Well then, eat me alive right now.
Q: No, I mean … A: Eat me, and I won't be here anymore.
Q: But we have the world championship coming up! A: Well then, there will be a different coach because I won't exist any more, since you will have eaten me.
Mora's rant has been a You Tube staple for over a decade, but as far as we know, he was never in danger of being eaten alive.

Jim Miller's book, "Where the Water Kept Rising," is available at Amazon.com and at his website:www.JWMillerSports.com